Here’s a nice itinerary following the Marne river banks, along mostly pedestrian streets and through the Vincennes woods. The main interest is the Marne itself with the beautiful houses surrounding it and the presence of a lot of nature, but on the second part of it you’ll also discover parts of Paris pasts which are mostly unknown to many Parisian.

This 8.5km walk will last from an afternoon to a whole day.

We start at the RER station “Joinville-le-Pont”, then head towards the pont de Joinville (there are signposts indicating the direction of the Marne banks, so it’s really easy to find it). Start crossing it on the left side, and go down the stairs to reach our first step…

This small island only holds a few houses, alongside with a tennis club and a music school. It’s only reachable by foot, and you shouldn’t be afraid to get lost as there’s just one path going around it ! It’s very quiet and enjoyable to walk there.

You’ll come across beautiful houses such as this one 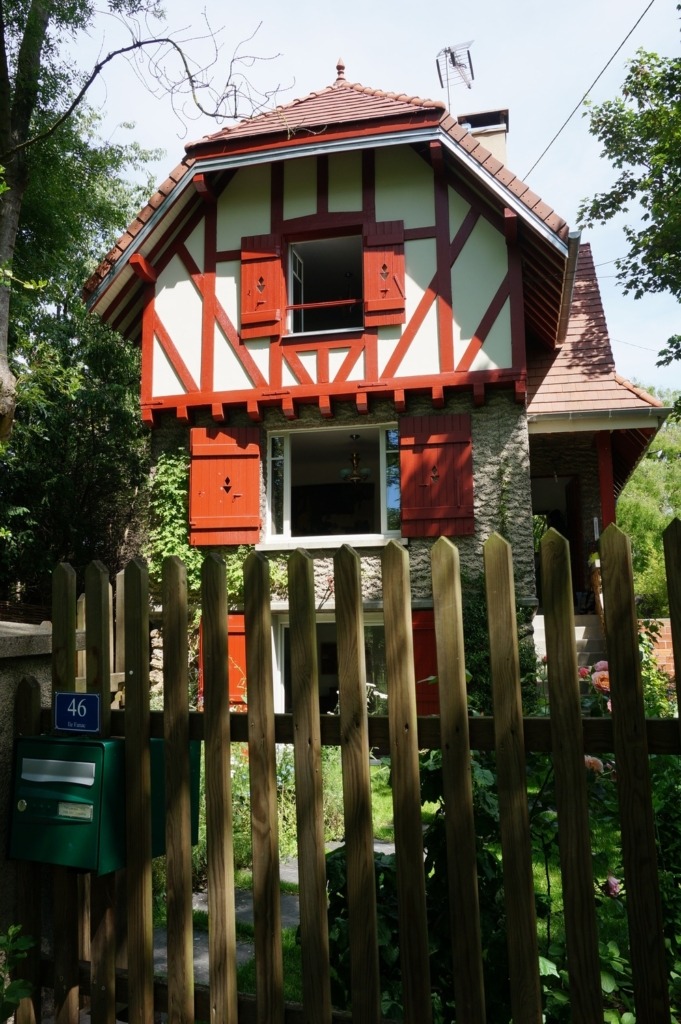 … many of which bear signs, which weirdly enough are often written in foreign language (there was also a “attenti al cane” warning about the dog)

I especially enjoyed this old portal with a small roof, which I found really picturesque 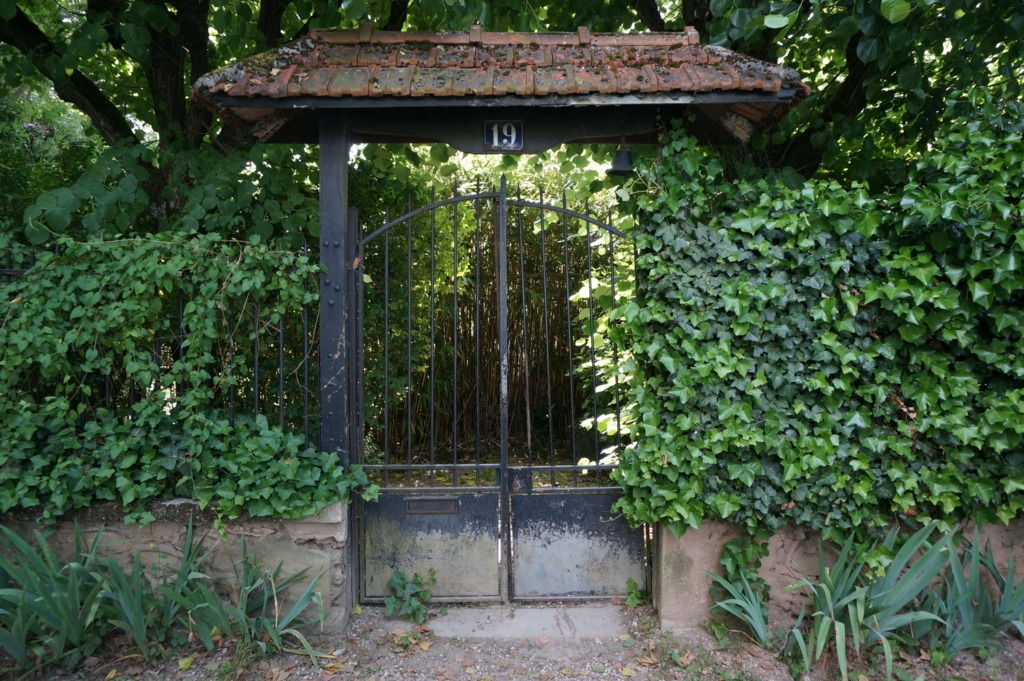 Once you’re done with this island, you can climb back up to the pont de Joinville, resume walking it to the opposite side of the station, and go down to the quai de Polangis

Follow the bank to your left and you’ll quickly find yourself crossing one of the Marne river tributaries, the Polangis. Follow it until you cross this beautiful restaurant : 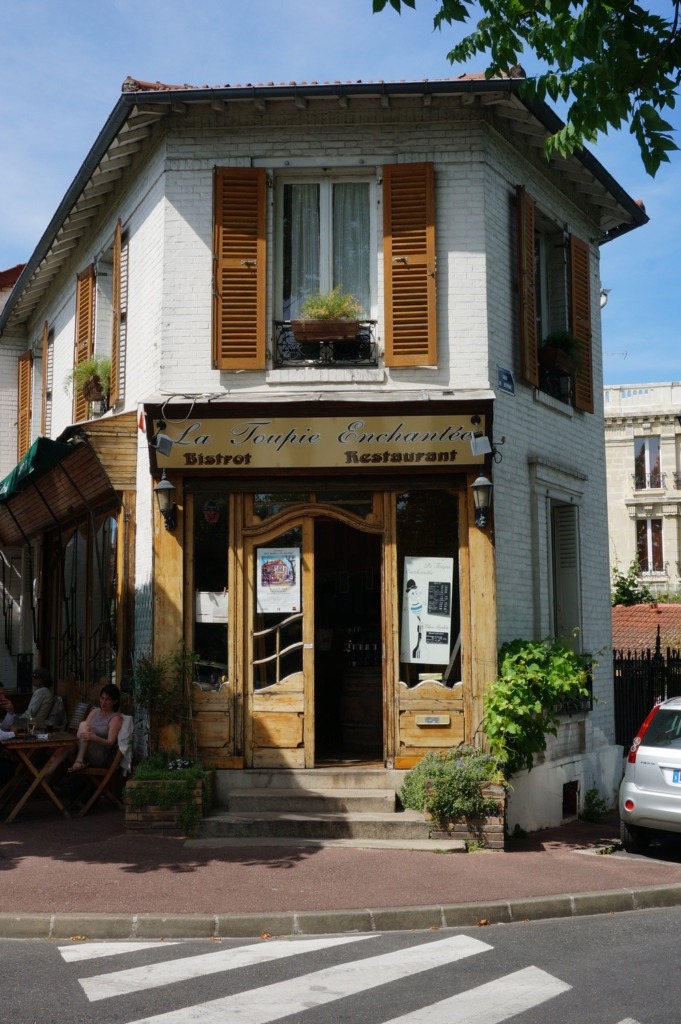 and don’t forget to enjoy the view of the river 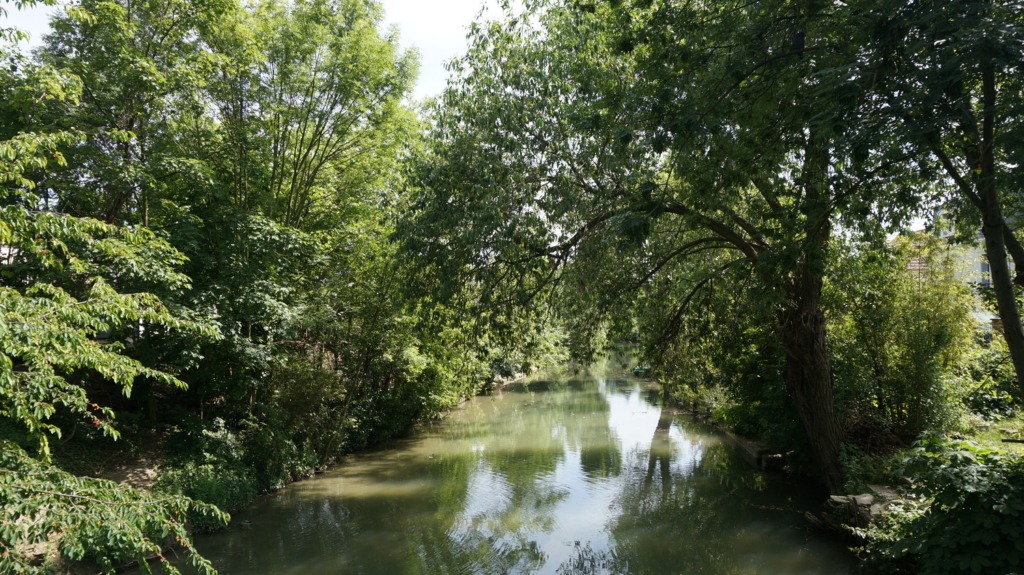 Then just walk along the river, until you find yourself back on the Marne banks. Note that there are more crazy signs on the houses ! 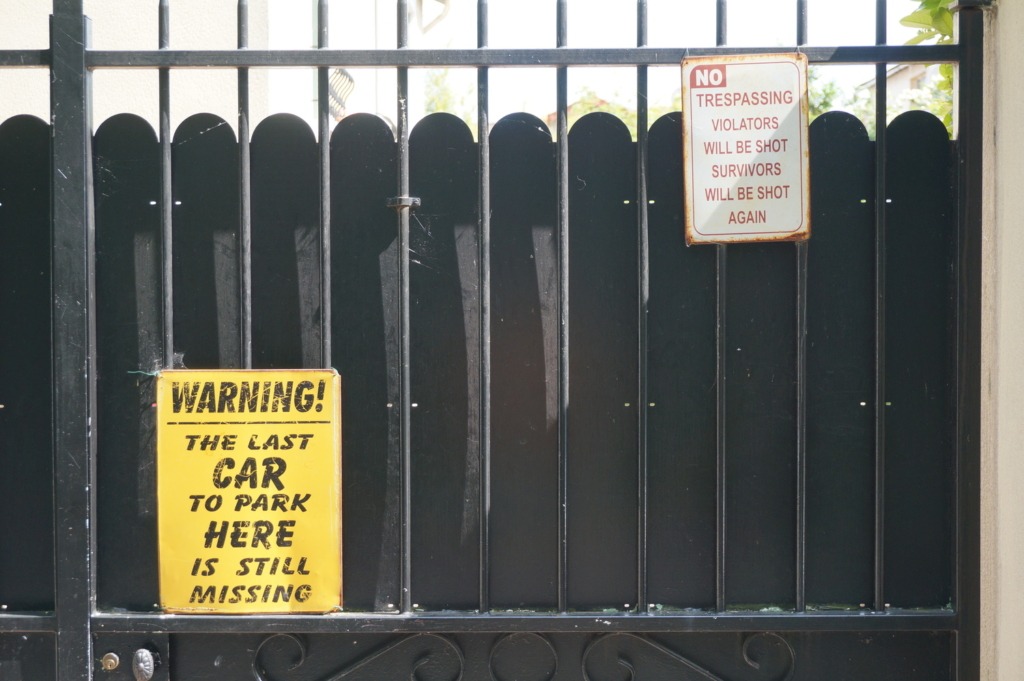 Continuing along the river, you quickly stumble across the famous guinguette “Chez Gégène”. Guinguettes were restaurants where you could also dance; apparently in their golden age, there were more than a hundred of them in this area ! Now there are just a few of them left 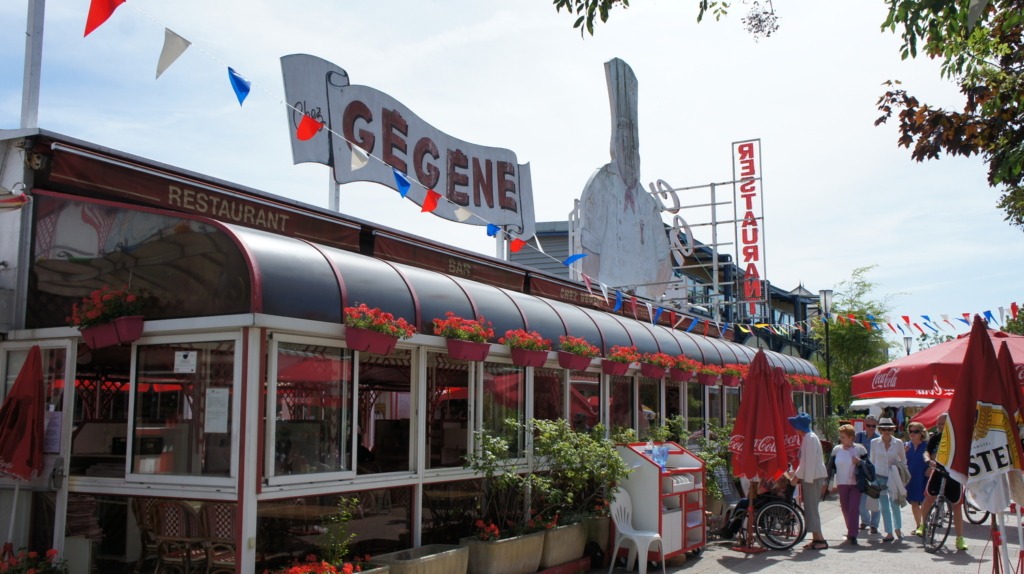 On the opposite bank of the river, the landscape is very enjoyable 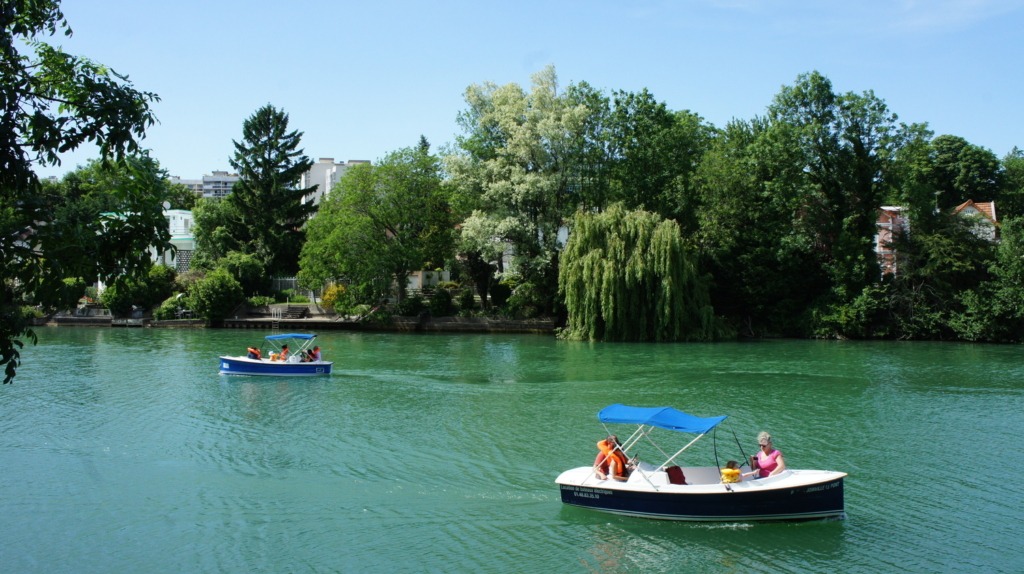 We wouldn’t mind moving there if we could afford it ! (spoiler : we can’t) 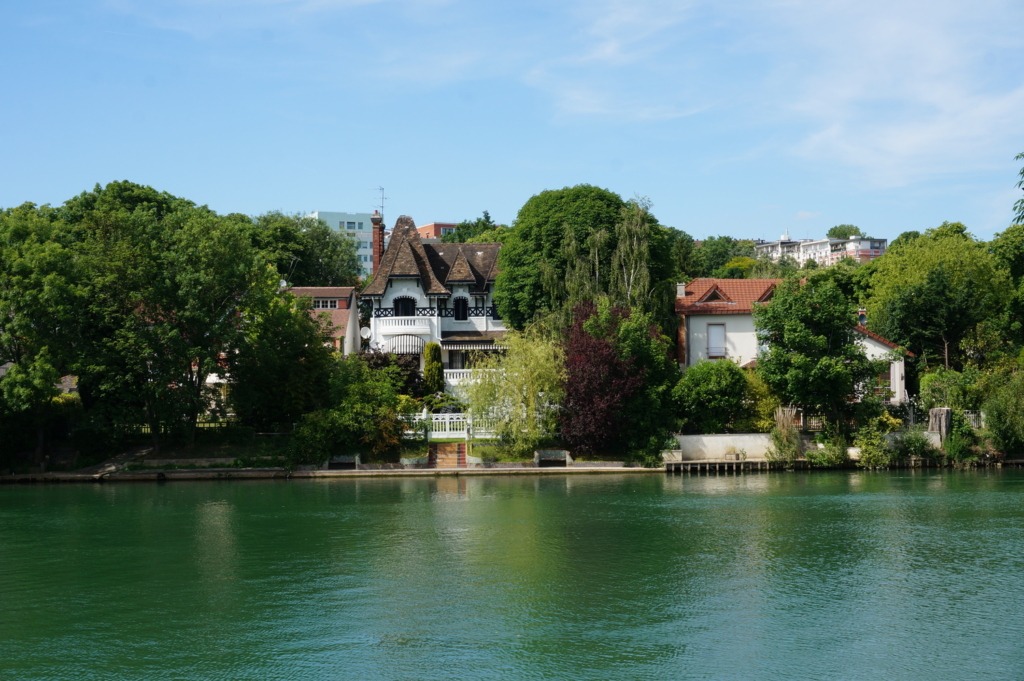 Continue walking along the banks, pass across the camping grounds (one of the largest around Paris), and head to the ugly pont de Nogent. Climb the stairs, cross it and go down again to the river bank. We’ll follow them in the opposite direction, quickly stumbling across a very surprising monument…

The pont des arts ? Isn’t it supposed to be located close to Notre-Dame-de-Paris ? Well, actually it is, but this one is the original. It was threatening to collapse so a new one was rebuilt in a nearly identical way in 1982; the original one was salvaged and rebuilt here. 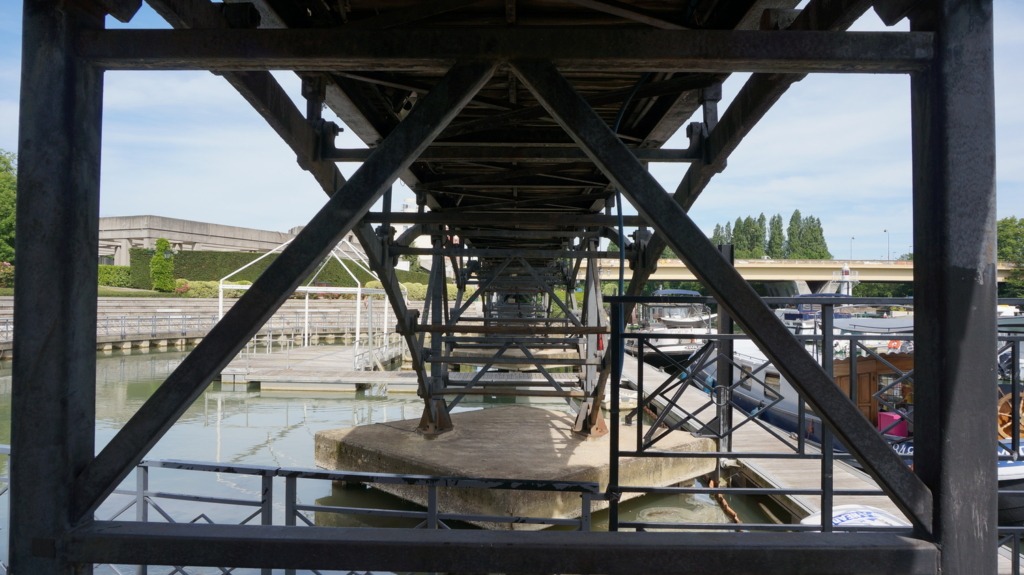 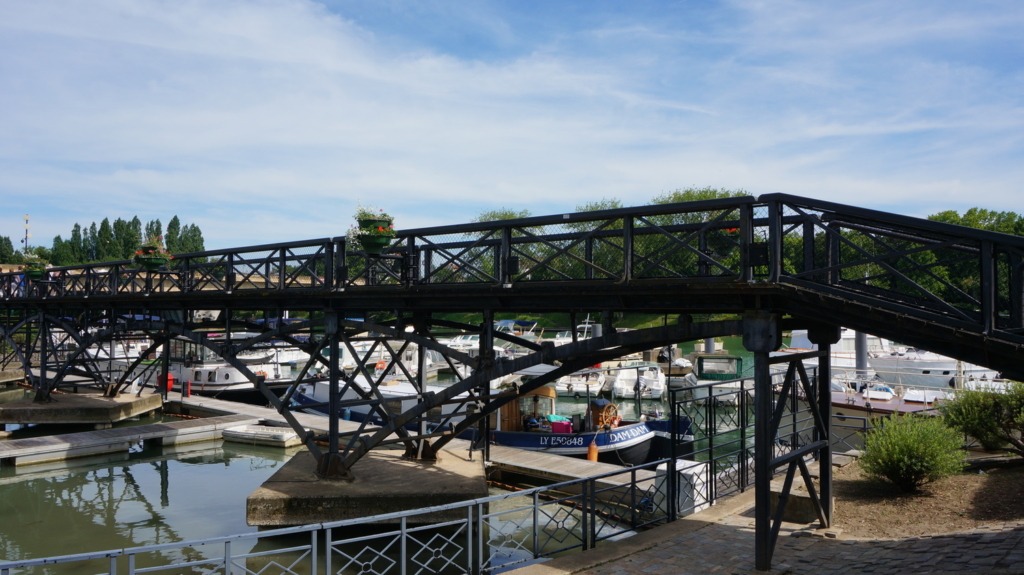 Then enter the Ile de beauté park, which contrary to what its name implies isn’t located on an island. Look at the beautiful houses around, and check the details… 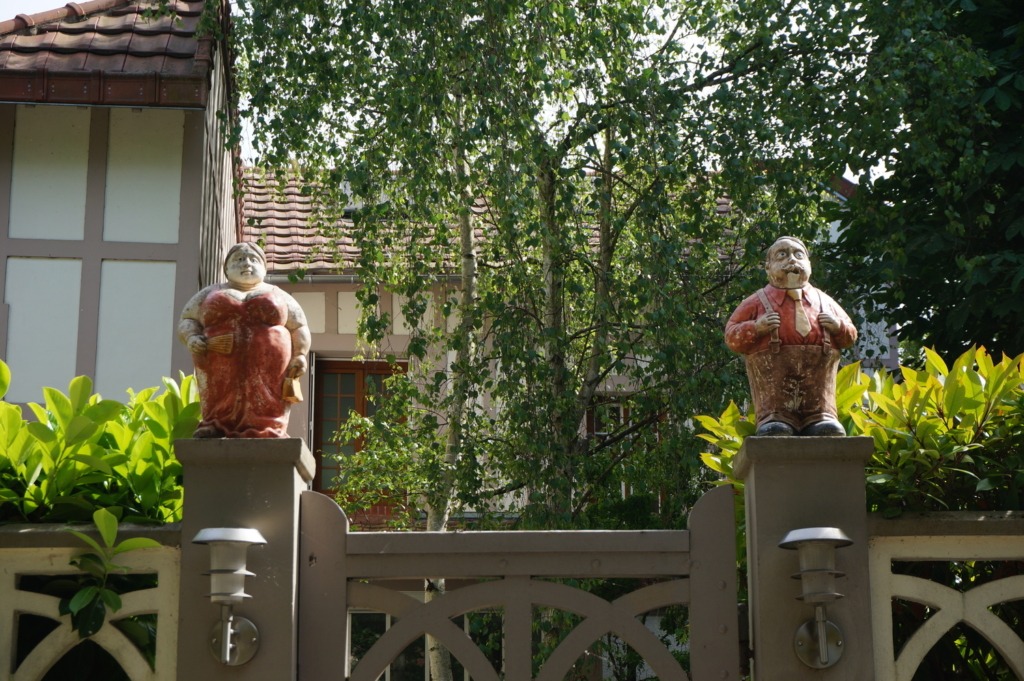 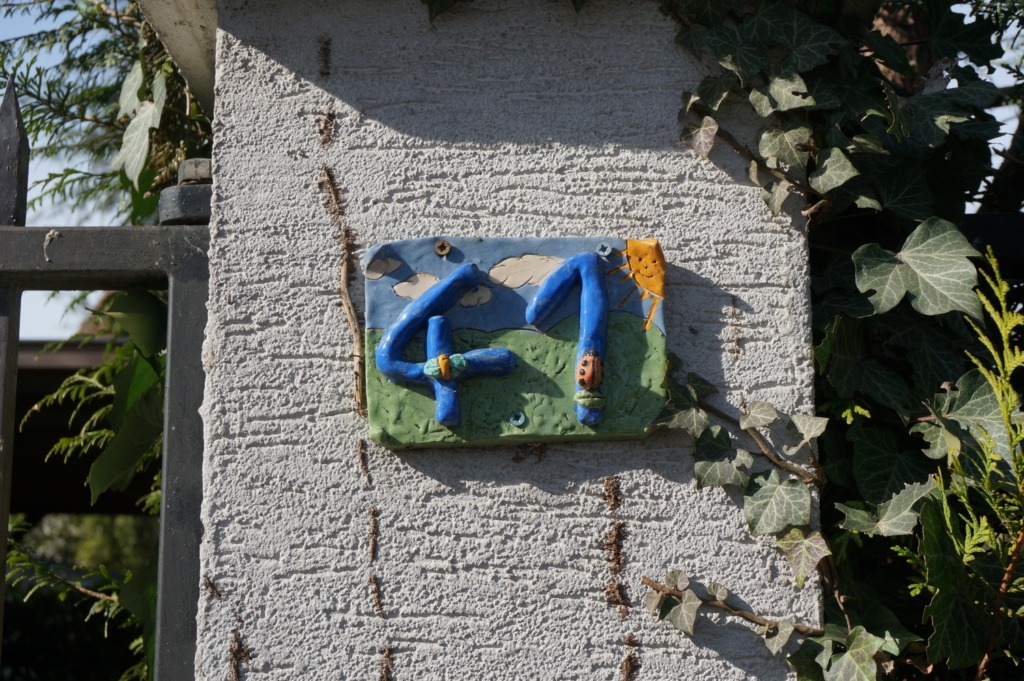 You’ll see this very surprising timbered house. I’ve never seen anything like it before ! 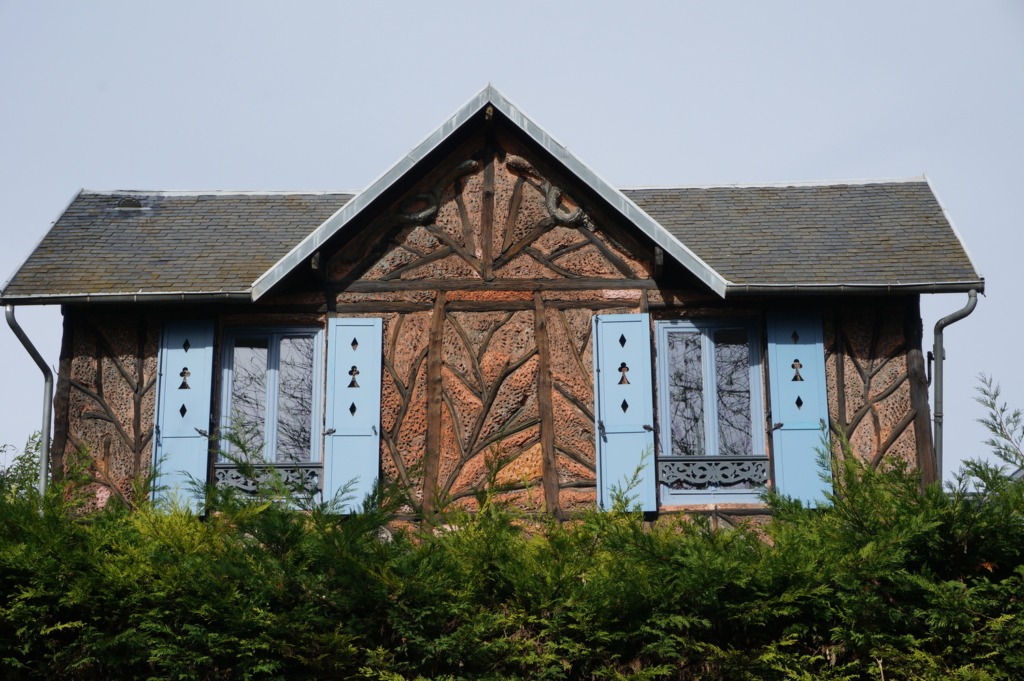 We’ll now leave the Marne river banks and head to the right towards the Victor Basch street. After seeing the original pont des arts, yet another remain of the Parisian past is waiting for you… And what a remain !

I actually couldn’t believe I didn’t hear about this one earlier… Until the 70s, there was a central market in Paris named Halles de Paris, built by the architect victor Baltard. It was destroyed as it wasn’t really adapted any more, replaced by a garden and an ugly shopping mall (the dreaded Chatelet-Les Halles area). By some ironic twist of urbanism, most of the outside part of this mall got recently destroyed in turn and we’ll get yet another design instead. We’ll see how it goes… but for now, back to the past !

Just like the pont des arts, one of the buildings constituting the halles was salvaged and got rebuild in Nogent. Now it hosts private events, sometimes TV shows. I regret I didn’t bring my wide angle lens in order to be able to take a picture of it from the front… 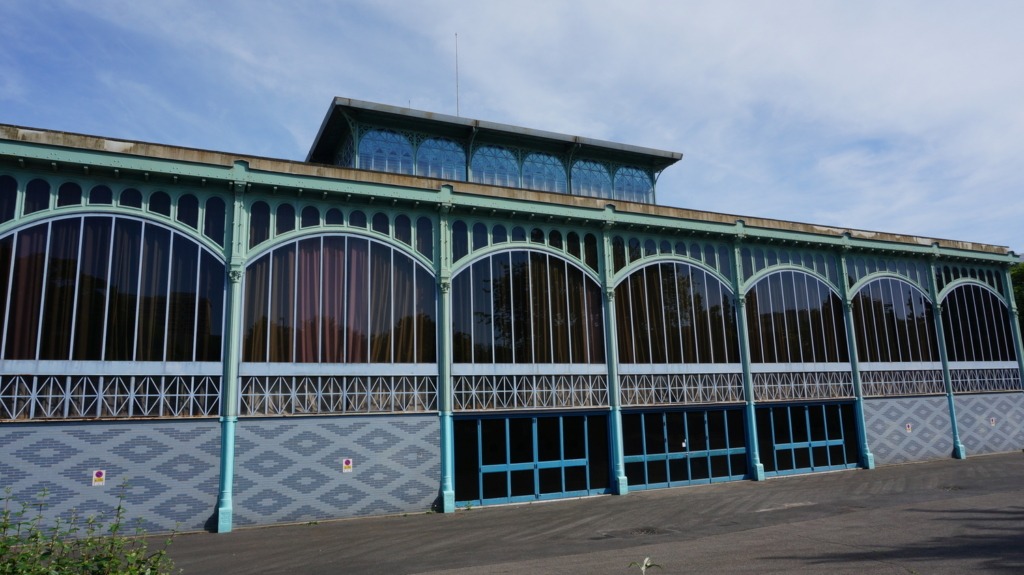 You can also see one Wallace fountain. I don’t have a good shot of this one but they can be found in many places around Paris; here’s a rarity, a yellow one located in the 13th arrondissement. They’re usually dark green, but there’s also a pink one. 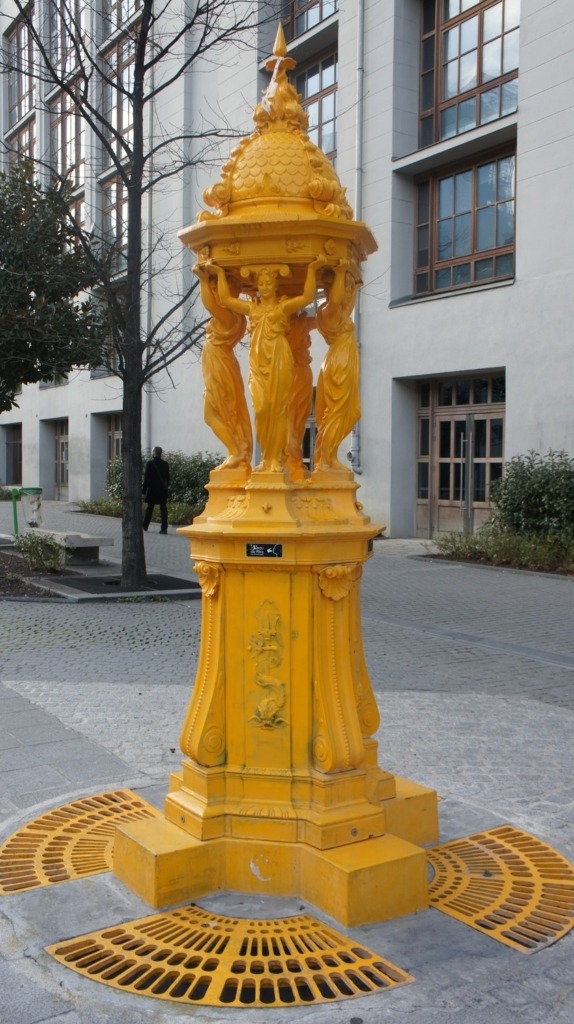 Finally, here’s one of the original Morris columns, used to hold advertising (they still exist, although in more modern design) 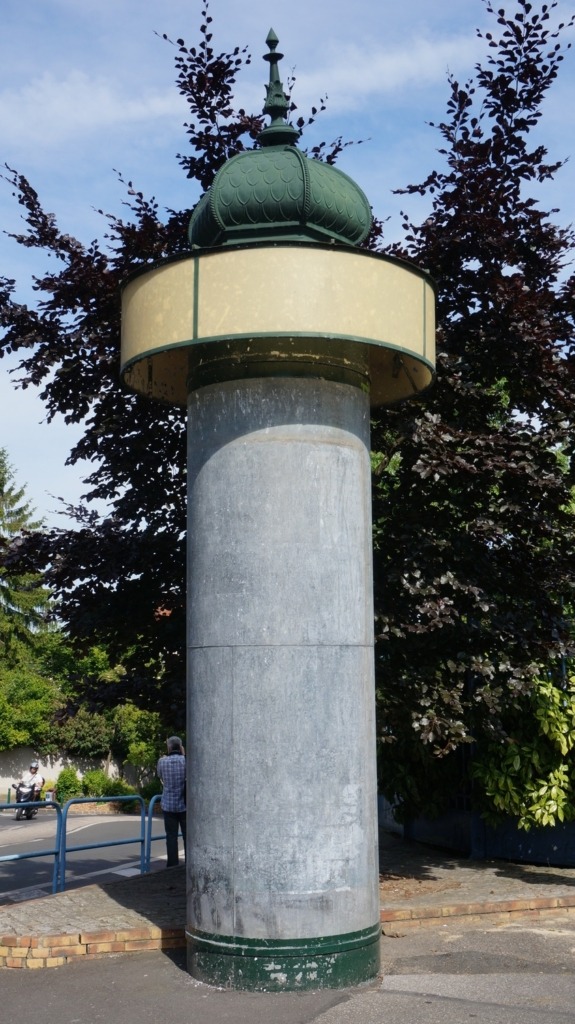 Continue climbing the Basch street, and take the rue Clemenceau, as we’re heading to the Bois de Vincennes. Once you reach the wood, don’t enter the yet, but follow the street on your left until you reach the jardin d’agronomie tropicale.

This place will be very different from the Marne river banks, and you’ll discover a very unusual place, unknown to most Parisian. The jardin d’agronomie tropicale is a very peculiar garden, where you’ll find remains of the colonial past. Statues, buildings, pagodas, greenhouses… most of them are very decayed and in great need of some repair; actually a few buildings got burnt down or collapsed. It was originally a colonial garden, then the 1907 colonial exhibition took place there.

You’re welcomed by a typical gate 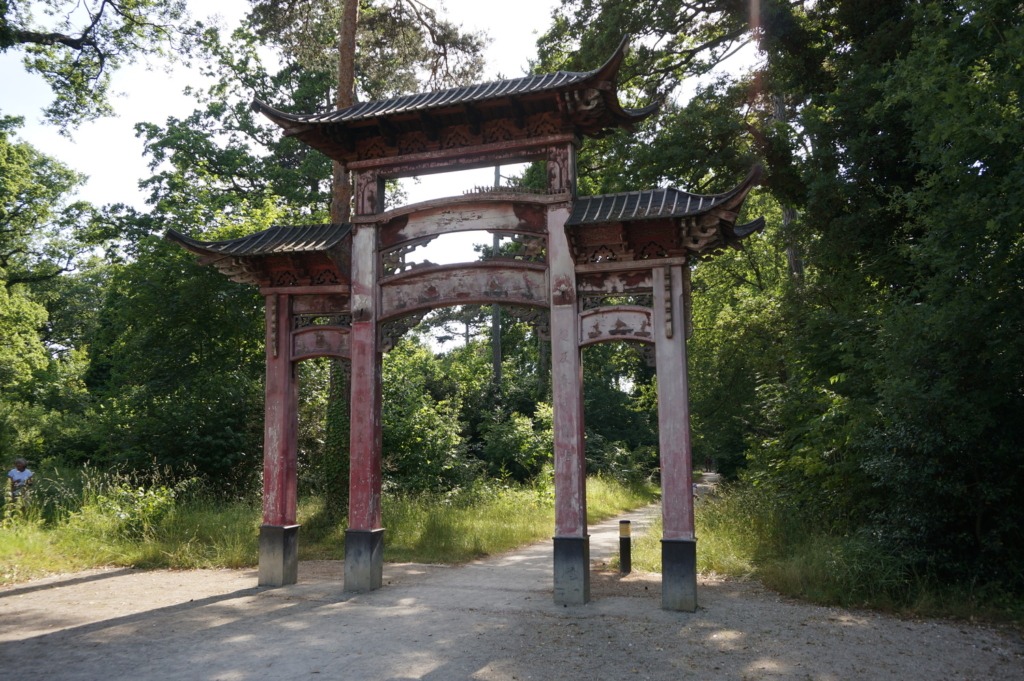 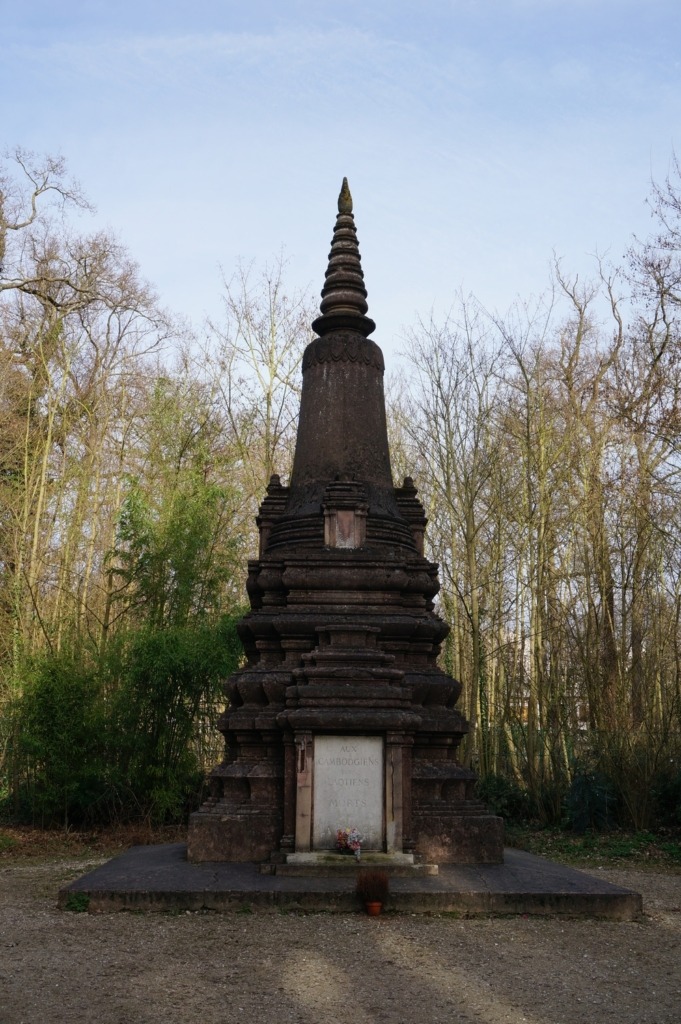 You’ll come across many other Asia-inspired items : 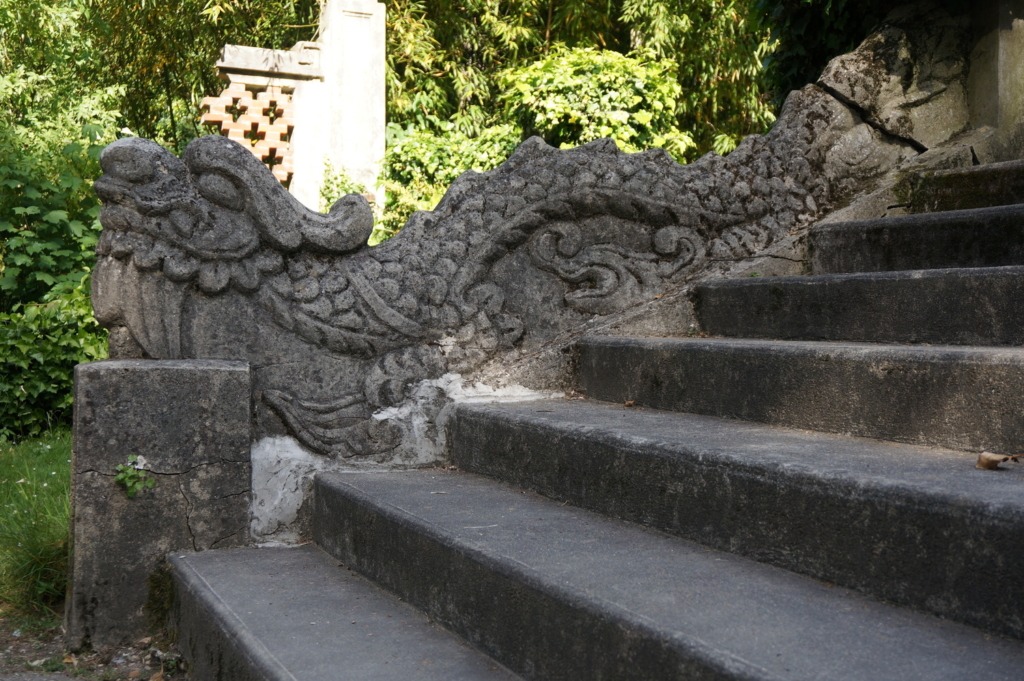 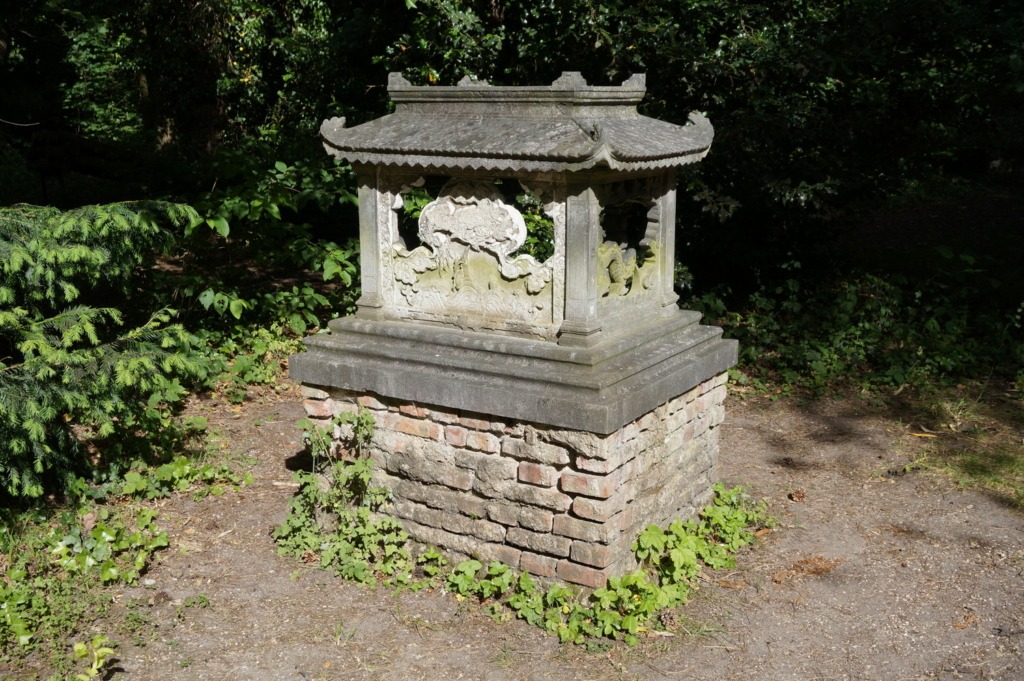 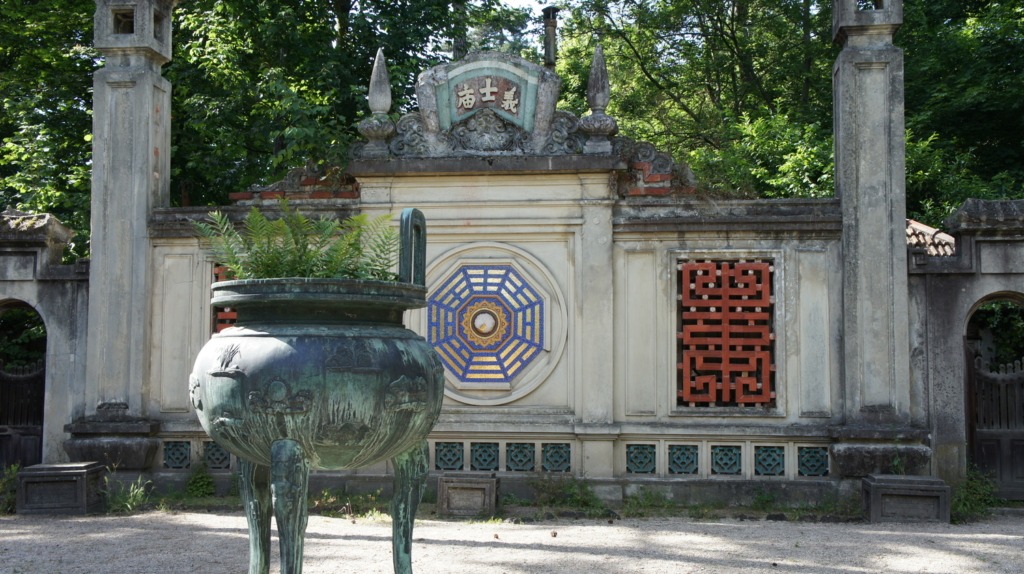 This is one of the few buildings which doesn’t seem ready to collapse (however it looks like it was rebuilt recently, after being pillaged and burnt down) 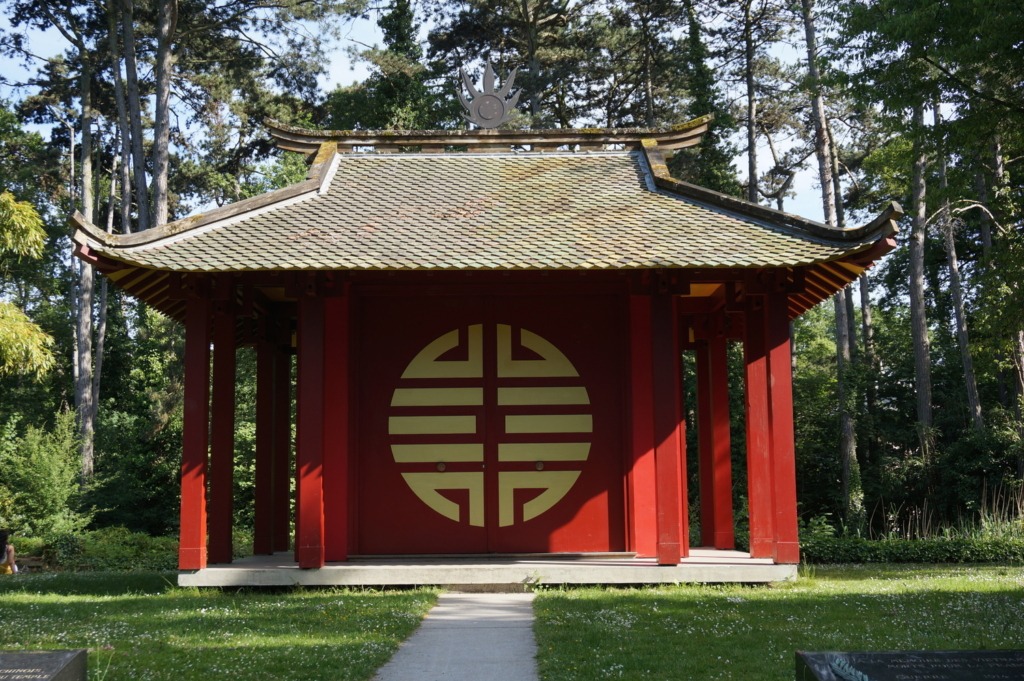 I really wonder if anything still grows inside this greenhouse… 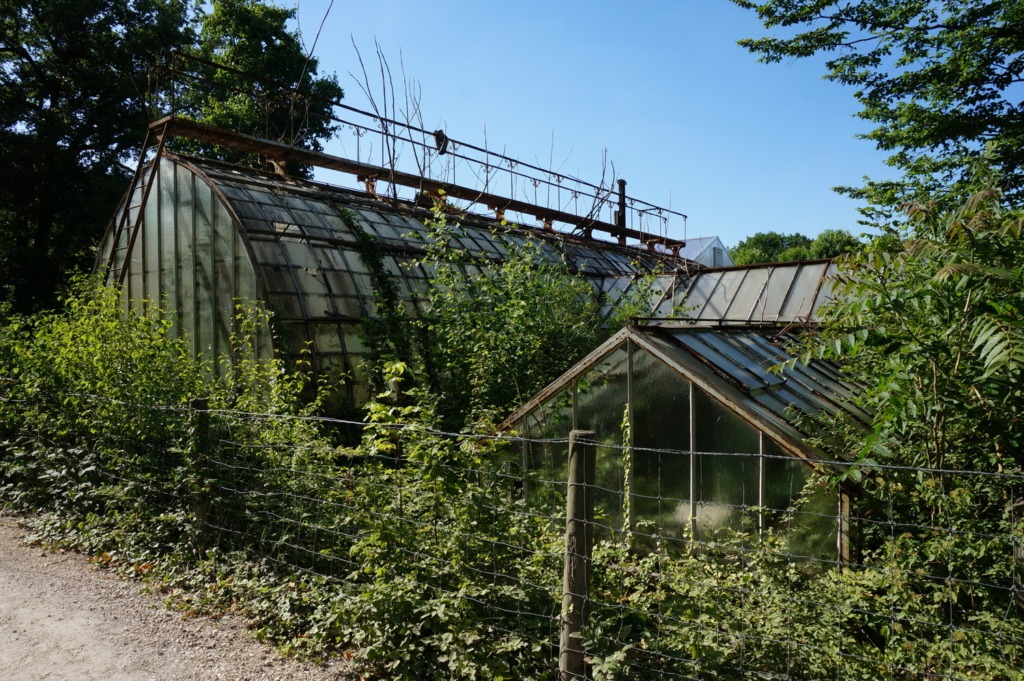 Once you’re done wandering in the garden, you can head back to the Pont de Joinville RER station by leaving the garden and pushing on the same street you came by, then go down the D86 which unfortunately isn’t the best way to end such a nice afternoon… You can also take the RER at the station Nogent-sur-Marne, located very close to the Jardin d’agronomie tropicale. Take the avenue des châtaigners in front of you when you exit the garden, the the avenue des Marronniers on your left.

We hope you enjoyed this walk on the Marne river banks !

You can view the detailed map on Openrunner

If you’re interested in the story behind the Jardin d’agronomie tropicale, you may check out this article on Messy Nessy Chic.