Well, the first step of this Vietnam travel lexicon will be from C to W, but that’s close enough 🙂

The goal of this page will be to sum up informations about various aspects of traveling in Vietnam.

In Vietnam, cash is king. Don’t expect to use your credit card everywhere; only high-end hotels and shops will accept it. Always carry some change with you !

ATMs are available in large cities, but rather uncommon in the countryside. We strongly advise you to withdraw cash ahead of time ! Even in areas with many ATMs, you may find out that several of them will reject your card, be out of service or reject the transaction at the last minute.

Most ATM withdrawals will incur fees both from your bank and the local bank. Moreover, for some banks the maximum withdrawal amount will be very low, sometimes as little as two million dongs ! The French site Tourdumondiste compiled a list of the fees and withdrawal threshold for each bank.

It’s a large concern in the country. There are several common sources of food poisoning :

Sun cream may be tough to buy in Vietnam. Most locals don’t use it, wearing protective gear instead. We buy it in supermarkets, as we don’t trust brands found in small stores. Vinamart shops usually stores Banana brand which we find rather reliable. It’s as expensive as home : around VND 200 000 (€8) for a 180g spray.

Tap water is not drinkable in Vietnam. Bottled water can easily be bought in shops or stalls along the road. Moreover, many restaurants/cafés/hotels have huge water bottles available for costumers, allowing you to refill your bottle for free.

Wifi is widely available throughout the country. Stop in nearly any coffee and you’ll get free wifi; the same is true for all guesthouses and hotels we stayed at. However the connection quality is often too poor to comfortably watch videos, or sometimes even to upload pictures.

Wifi codes will usually be displayed on the wall. In some cafés you may have to ask the waitress. In our motel in Ba To, it was even displayed on our pillow ! 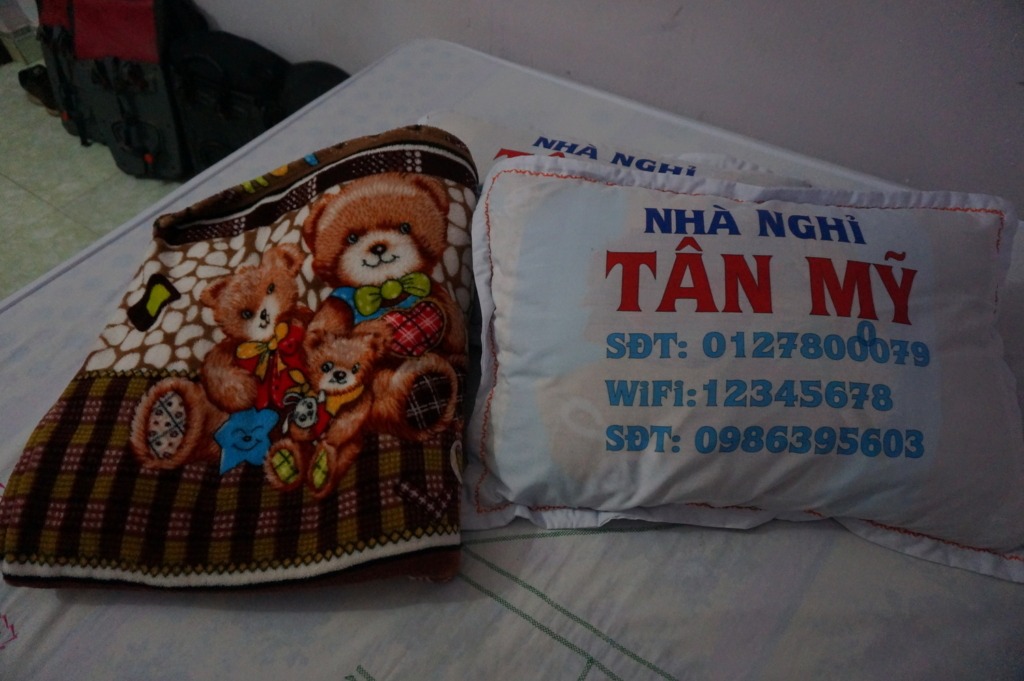 I will update this Vietnam travel lexicon as time goes by. Stay tuned !