While traveling by bicycle in Vietnam, we used a variety of local services in order to make our life easier. From bicycle cleaning to laundry service, here’s a guide on how to simplify your cycling trips in Vietnam !

In Vietnam it’s easy to get your transportation mean washed. And in our case it was often necessary, as our bicycles ended up being covered with mud very quickly !

Look for the sign rửa xe; you’ll often notice a water hose and the wet ground in front of the place.

Surprisingly, the level of service varies greatly from one place to another. In the most basic places, the operator will spray high-pressured water on your bicycle, and consider the job done. While it’s enough to remove most of the mud, this won’t remove all the dirt located for example between the spokes. As a result, the employees often wash these areas manually with a cleaning brush. In the most fancy car wash we visited, three employees spend a long time scrubbing our bicycles. It took them longer to clean our two bicycles than to wash a nearby car !

Here are a few tips you may find useful : 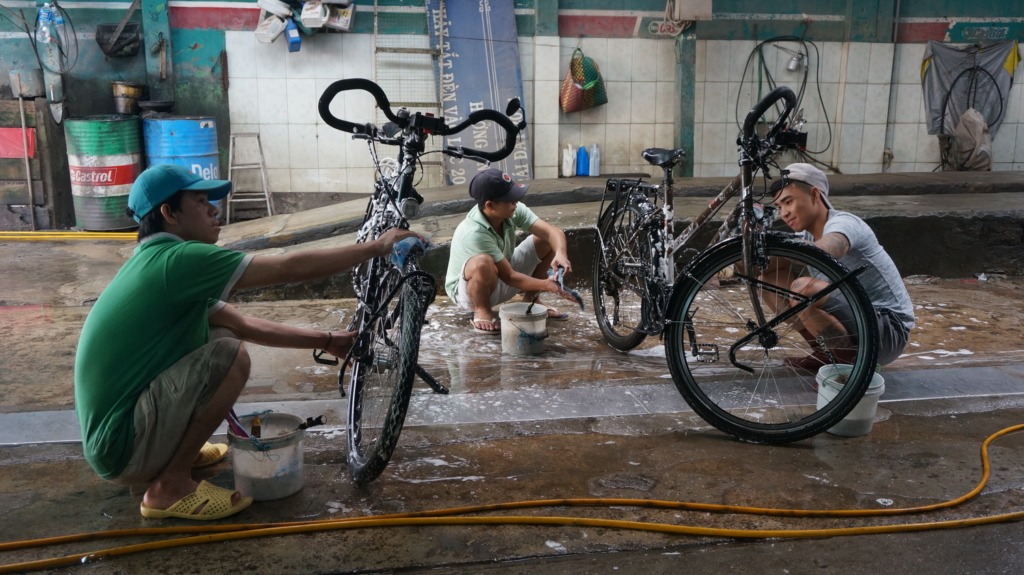 With the high temperatures and many dusty roads, cycling is Asia will make your clothes suffer. While traveling around China by bicycle, I used to wash my clothes in the hotel’s bathroom sink. Now that I realize how cheap it is to get our clothes washed, I’m not about to do it myself again !

Fancy hotels will often charge a crazy price per item. For example, washing a pair of socks will cost anywhere between VND 5 000 and VND 20 000 (between 20 and 80 euro cents). On the other hand, getting your clothes washed in a laundry will cost you less than one euro per kilo !

Laundries will be more easily found in touristic places, usually in the backpackers’ area if there’s one; look for a giặt ủi sign.

In Kon Tum, we found a restaurant whose owner also washed clothes. In Quang Ngai, we were lucky to have a laundry place a few meters from our motel, while in Nha Trang there are many “Laundry” signs in the touristic area, in the Eastern part of the city.

If like me you’re a lazy bum, you can pay someone to inflate your bicycle’s (or motorbike’s) tires. Note that in case of a bicycle, only air chambers with a Schrader valve (also called American valve) will be supported. It’s commonly found on mountain bikes, more rarely in road bicycles.

You can request this service in any motorbike repair shop, which can be found in virtually any inhabited place in Vietnam. Cost will be ridiculously low, probably VND 5 000 (less than 20 euro cents).