Tam Ky is located around 40km South of Hoi An. This city and its surroundings don’t have many touristic sights, and thus are often ignored by both foreign and local tourists. However, we were curious about the mural paintings in Tam Thanh, a fishing small village 10 kilometers East of Tam Ky. Moreover, there are two large remains of Cham civilization there : Khuong My towers and Chien Dan Cham tower

Reaching Tam Ky from Hoi An

There’s a surprisingly large number of connections available between these two cities :

We try to use small roads as much as possible. The more peaceful traffic and usually better landscape are  our usual motivations. However, today we had another reason for it !

The quest for the bamboo bridge

We wanted to find what is probably the largest bamboo bridge in Vietnam. It’s supposedly located around 10 kilometers We were of course curious about it, and tried to find it using a combination of Open Street Map and an itinerary found in Good Morning Hoi An.

Going South from Hoi An, we crossed the river on a new bridge (Cầu Cửa Đại), which offers nice views on the sea and the river. 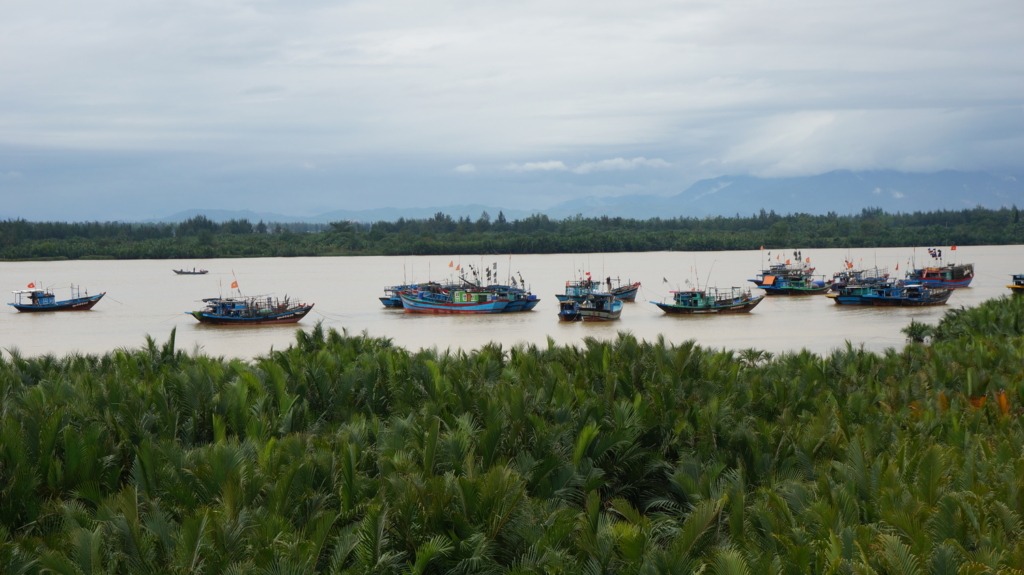 We then took a small road on the left, following the river, and started searching for the bridge. Long story short, it appears that it got washed out by the recent floods 🙁

The pleasure of riding local roads

We were of course deceived by that, but the good thing is that it allowed us to ride a very pleasant local road. We rode along fields, passing through many small villages and spending our time replying to the “Helloooo !” from children greeting us.

After a bit less than 30 kilometers, we crossed the “Tam Ky – Hoi An” road and decided to give it a try. Apart from the great road surface, it had zero interest at all, as the scenery was borderline ugly.

As we were taking a break, I had the stupid idea to walk on the ground separating the lanes. It was so wet by the recent rains that my feet went down nearly 10 centimeters ! 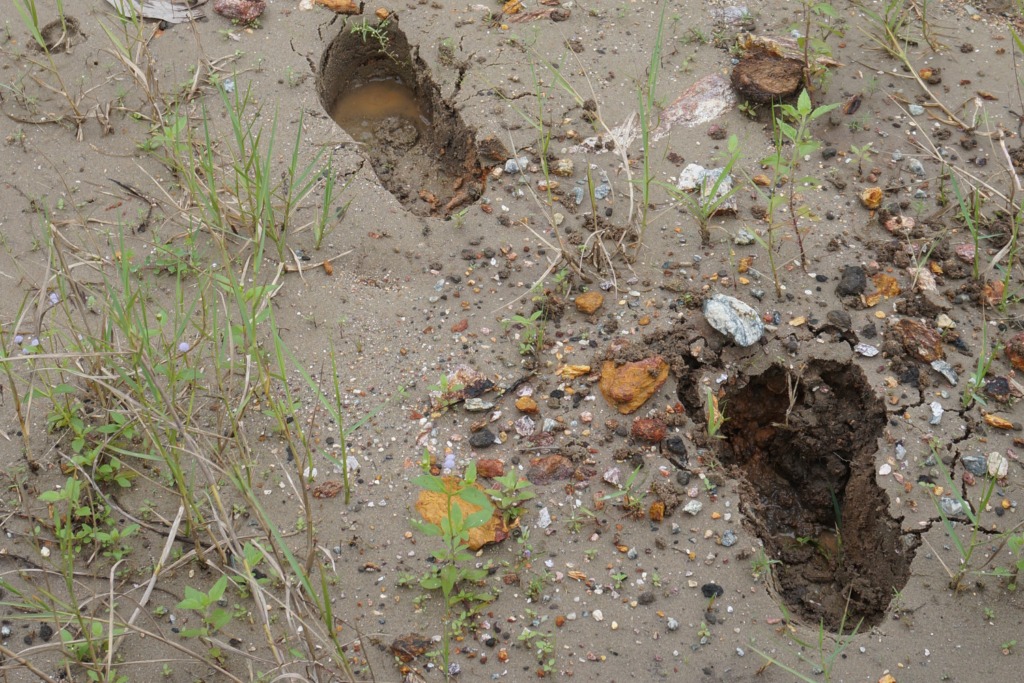 We quickly reached a sign “Tam Ky – 2.7km” and starting rejoicing… and then, suddenly, the shiny new road we were riding on abruptly stopped. Thanh asked a local for directions and she pointed us to a small road, which ended up being pleasant. However it was starting to rain heavily again, so we were in a hurry to reach the city and find a place to stay !

We ended up in a basic guesthouse (Nhà nghỉ Phi Hùng, 439 Hùng Vương) , where we were asked 200kD for a night. Standard rate is 150kD but it was more expensive for us as they supposedly have some administrative tasks to perform in order to register foreigners.

The next day we went to visit Tam Thanh. Reaching it by bicycle was easy : we followed a road labeled “604” on Open Street Map (but sometimes QL40B locally). There were regular signs pointing us towards Tam Thanh. It was a quick 10 kilometers ride. Once we reached the village, we were greeted by the first mural painting

At this point, if you want to have a look at the sea you can keep going straight ahead. We chose to have a look at the paintings first and go back along the sea later, so we turned right and rode for a a bit more than a kilometer until we spotted painted coracles, quickly followed by painted amphorae.

We then entered the part of Tam Thanh where most mural paintings are located. They’re most often painted on the walls of houses and shops.

The coracle, a typically Vietnamese boat, is also a very popular support for painting.

You’ll also find many paintings on the alleyways to your right, which lead to the sea.

We then turned right on an alleyway in order to reach the sea, and right again in order to follow the beach back to the village entrance. The sea color wasn’t great that day, probably due to the recent heavy rain and floods. Trash is also a big issue here, as a lot of litter is visible on the beach.

We spotted a few more mural paintings on the way.

Our initial plan was to visit the Cham towers North of Tam Ky on the afternoon, but as the rain grew stronger we decided to head back to Tam Ky in order to dry ourselves.