Tam Hai is a small island located around 25 kilometers South from Tam Ky. There was very few informations available about the island, but we decided to go anyway as the island seemed very beautiful.

Two ferries link the island to the mainland : one is located 15km South from Tam Thanh, and the other is close to Niu Thanh, 25km South from Tam Ky. As the latter itinerary would have forced us to ride on the QL1, we took a gamble an decided to use the other road instead. Why a gamble ? Well, the road from Tam Thanh was only visible on Google Maps, not Open Street Maps. Moreover, the people we asked about it all wanted us back on the dreaded QL1.

However the road actually exists (and is extremely easy to find) : once we entered Tam Thanh, instead of heading left to the painting, we turned right on Liên xã and kept on this road. We came across an impressive number of pools used for aquaculture (probably shrimps). The road surface was nice at first, but then deteriorated (probably because of the heavy rains in the last days). 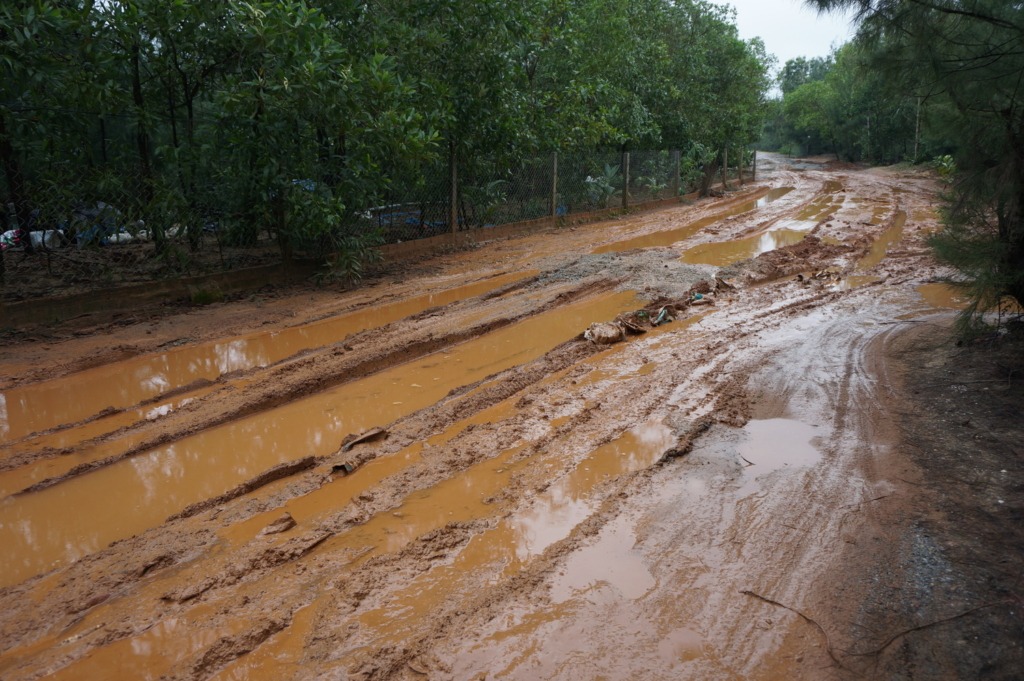 The road condition grew worse and worse as we kept on, but finally we reached the end of it… and the ferry terminal was there ! I was a bit surprised to see Tam Hai was so close, probably less than 500 meters.

A first ferry arrived from Tam Hai but didn’t return there; we had to wait 15 more minutes to take the right one. Crossing the short distance was very quick, and cost us 10kD. 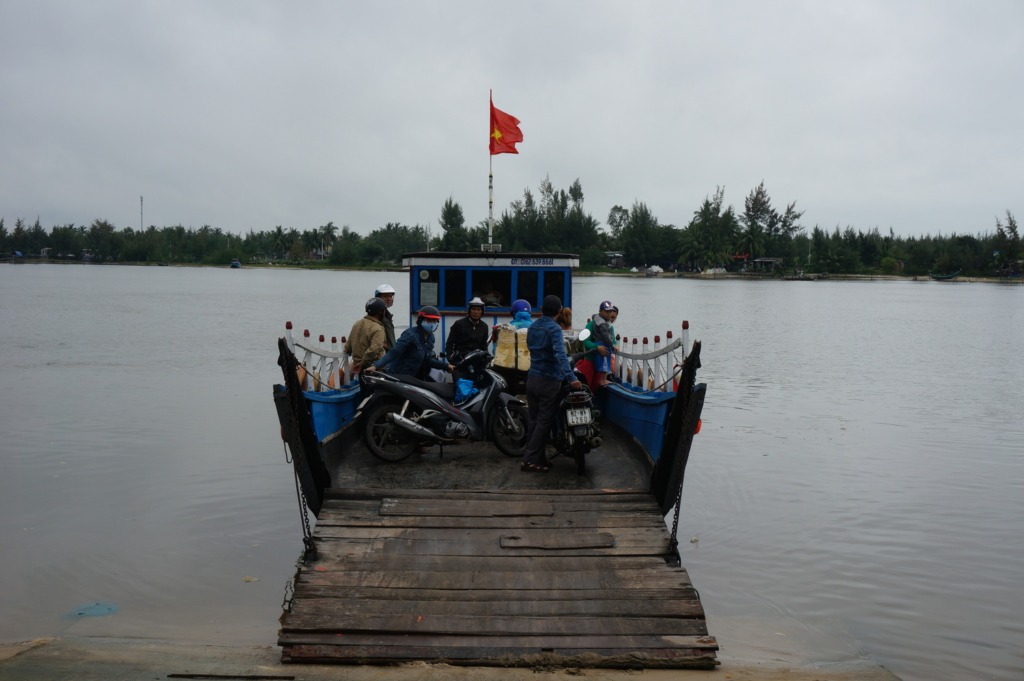 Finding your way on Tam Hai

There are basically two roads (or concrete slabs), and you’ll encounter nearly only motorbikes as there’s too little space for cars. If the quality of the surface was awful as we left the ferry, it quickly improved after 500 meters.

The first road basically links the western and eastern parts of the island. Our ferry arrived on the West side, while the larger port on the East side seems to host ferries going towards Niu Thanh.

The second road which we crossed right before the high school goes north to the village of Ban Than.

If you can afford it, Le domaine de Tam Hai is located very close to the place where our ferry arrived. Out of curiosity, we checked the rooms price online, but the resort seemed to be closed at this time. We don’t know whether it was because of the recent floods or because it was the low season.

We asked locals about a guesthouse while at the East harbor. They directed us to a karaoke place which had rooms, but the owner said they were too basic for a foreigner. It sounded like a lame excuse, but we moved on and Thanh called a phone number she had found on a Vietnamese website. The lady also sounded a bit reluctant to host us in her place, as she described it as dilapidated. However she offered us to have a look, which we did. We headed North until we reached the village of Ban Than, where we were welcomed by mural paintings (see below). We kept following the road until we found the Cafe Binh, and the guesthouse was opposite of it. 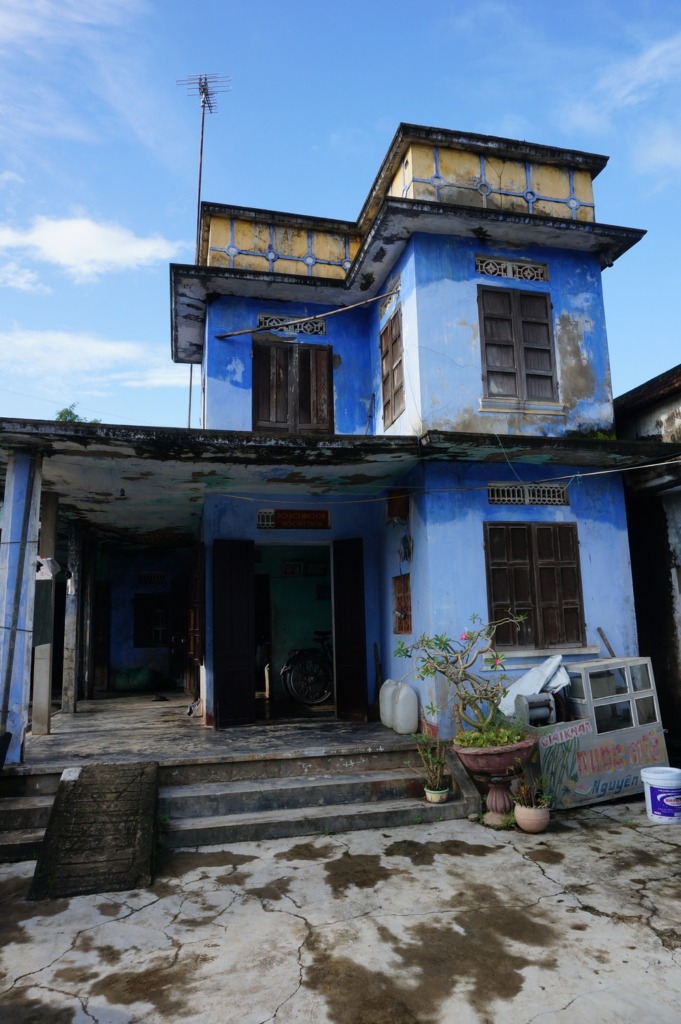 Let’s face it, the house had seen much better days. The walls in particular were in a very bad shape. There was no hot water, and we had to use a large plastic scoop to get water from a huge barrel. The bed didn’t have a mattress but I actually slept like a baby as I like hard beds !

In one word : this place isn’t suitable for everyone. 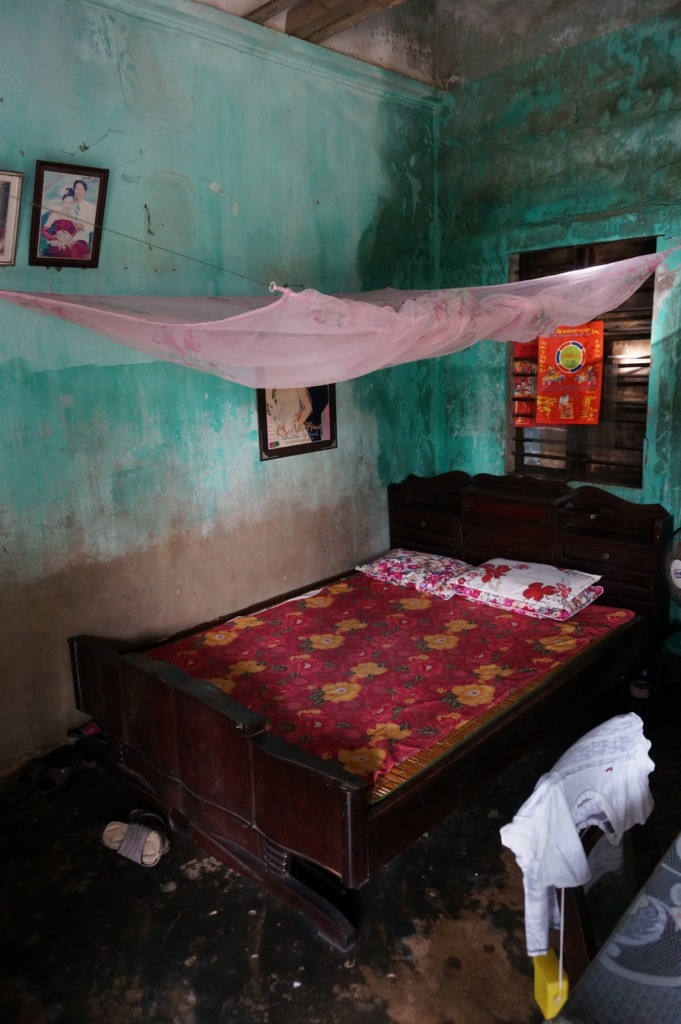 However the hostess seemed very nice and we felt like giving her place a try. Later that day (and the next day) she cooked both lunch and dinner for us, and they were excellent. In spite of the very basic living conditions, we really enjoyed our time there.

It was located a few hundred meters from our guesthouse.

Let’s face it, what we saw was very, very far from the beautiful pictures we found earlier on the internet. The beach was covered with litter, and the gray sky gave the sea a sinister color. We were very disappointed, and headed to the mural paintings and the other beach, which we’ll describe in next paragraphs.

According to villagers, after February/March each year the beach gets much cleaner. There’s less litter coming from the sea and what remains on the beach gets cleaned up by the locals.

On the next day, we tried the East side beach again, in order to find a spectacular rock formation located in this area. What we couldn’t see the other day is that at low tide, it’s possible to walk on the rocks at the left side of the beach. Just be careful as they’re rather slippery ! 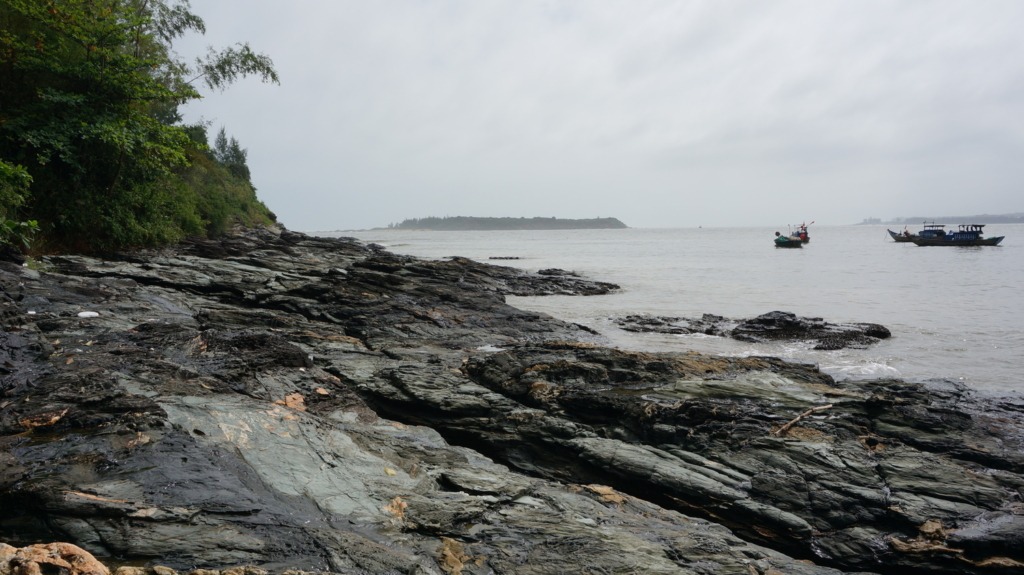 Unfortunately for us, it seems that the highlight of the area has been destroyed by a recent storm. As a result, the sights are beautiful but not breathtaking. 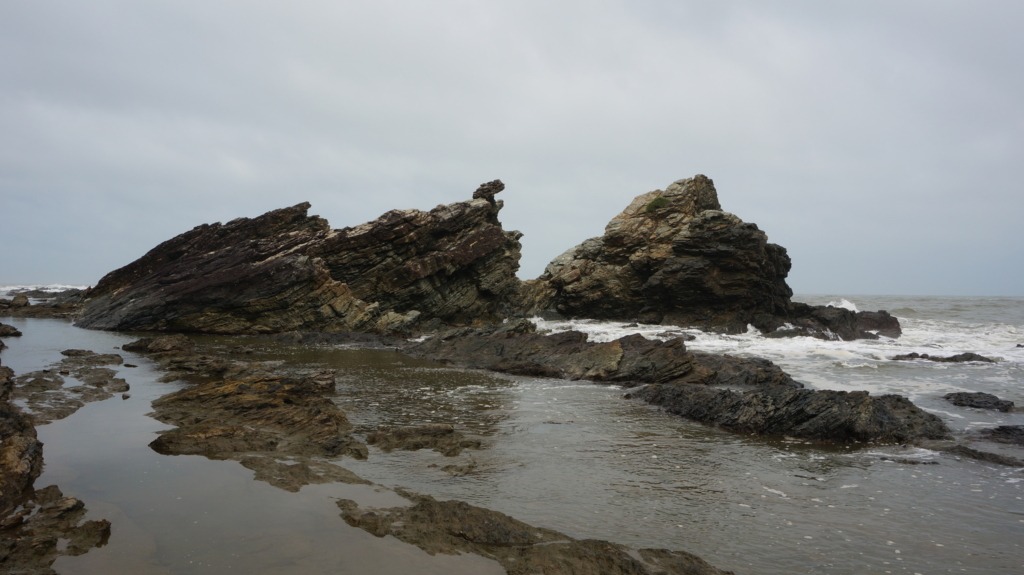 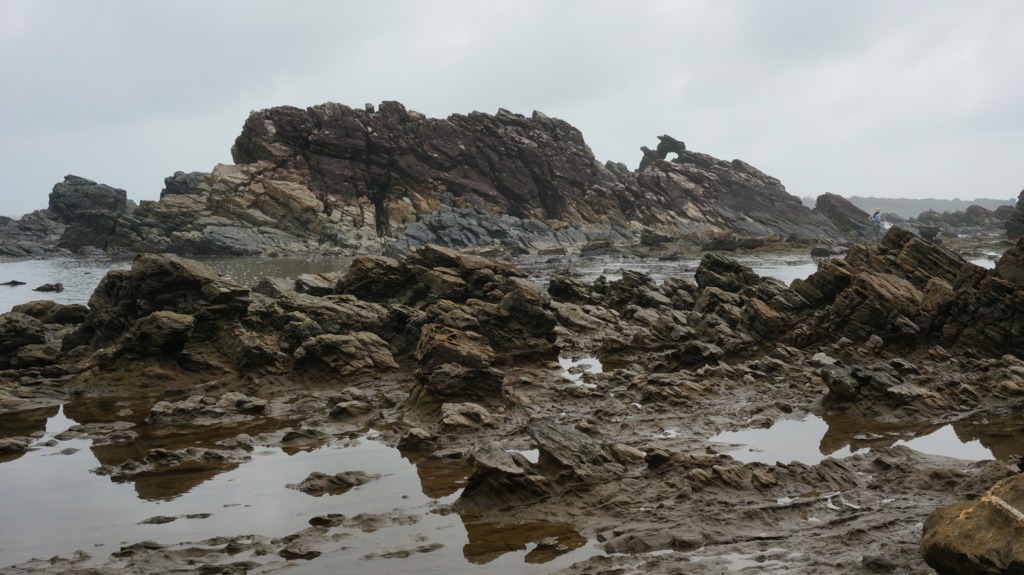 Unlike the other beach at Ban Than, this one sees a lot of activity. In the mornings, local fishermen bring back their nets and sort out the fishes and seafood. They sell most of them right there. 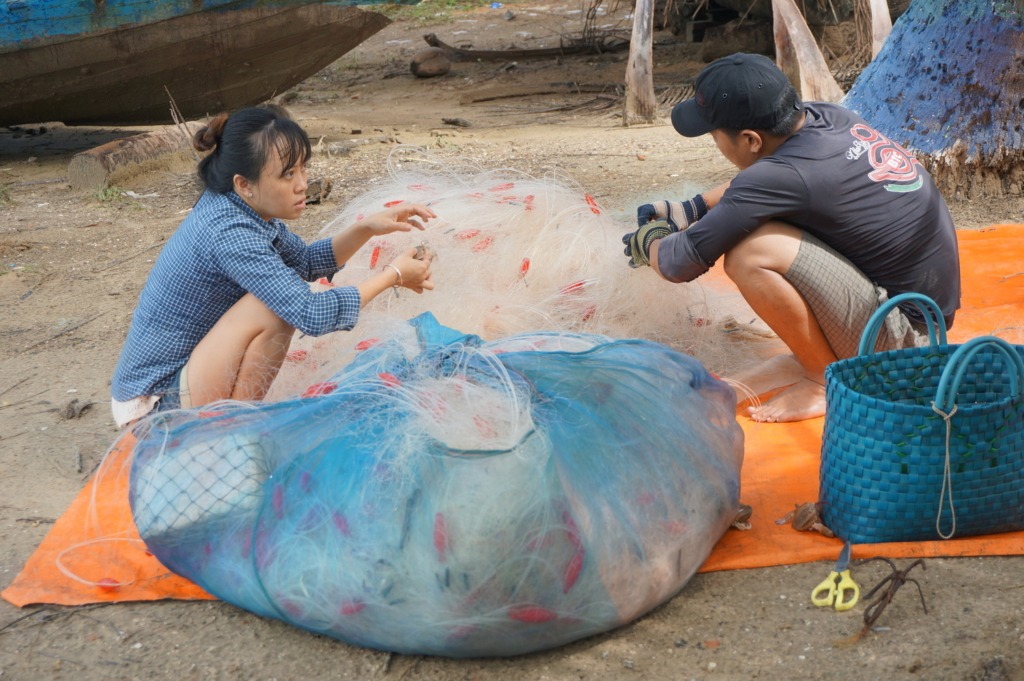 The place is easily spotted as base of the trees is painted using bright colors. 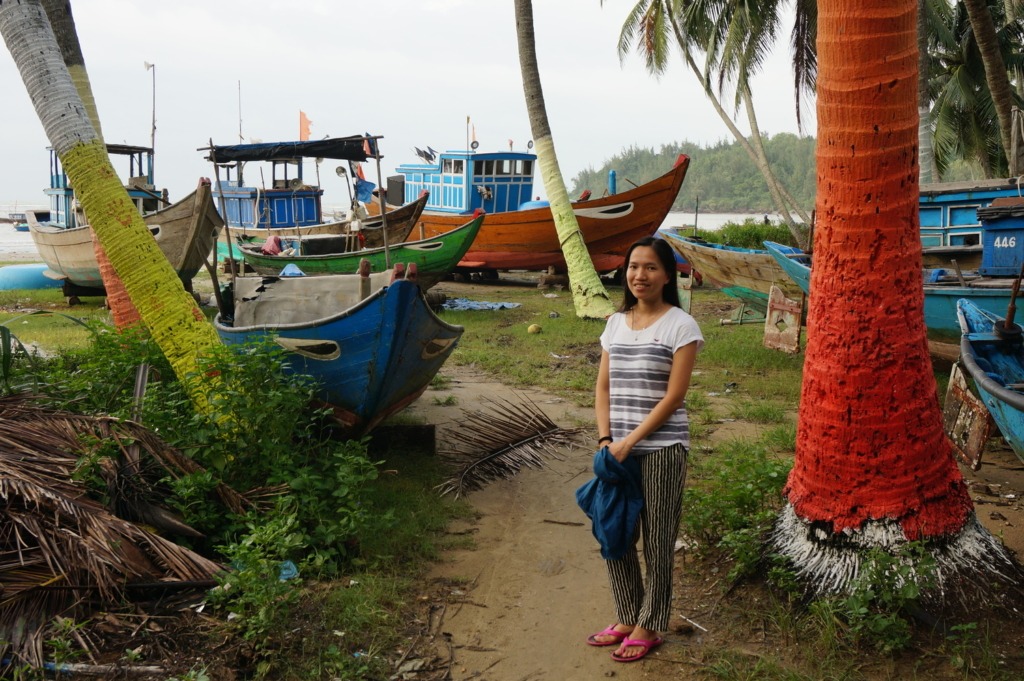 There are many fishing boats and coracles lying on the sand. The blue sky that day was a very welcome change from the previous days ! 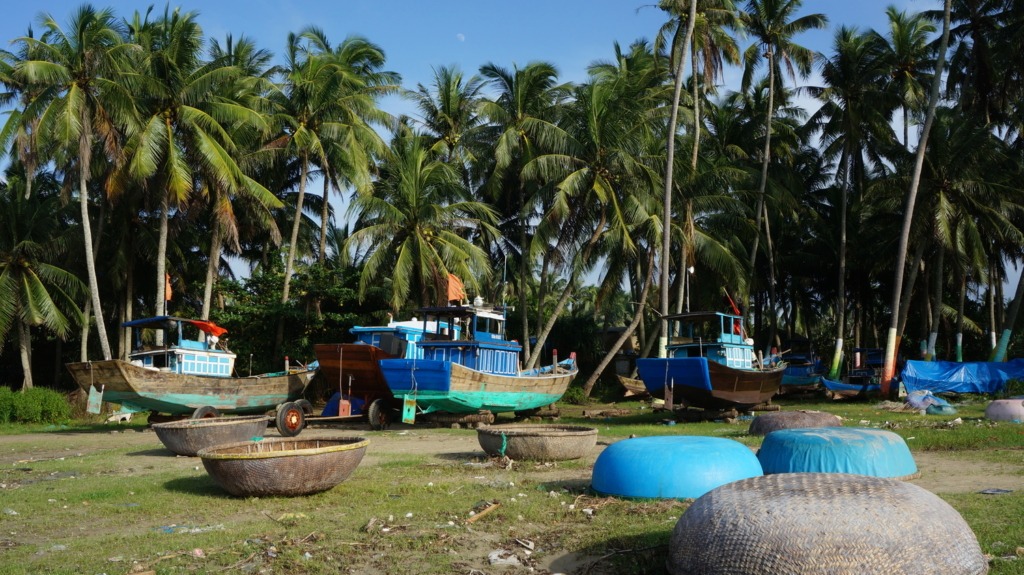 As always I love looking at the boats’ details 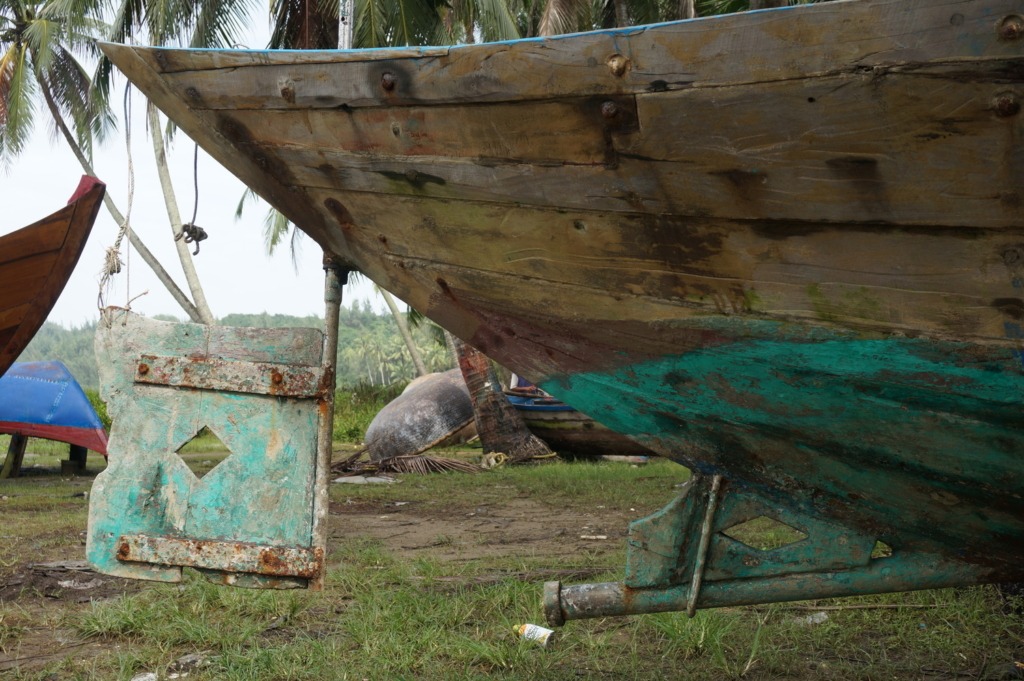 Just like on the other beach, you can follow a small path on the right side. It’s a much easier walk than on the other side, as you’ll walk on sand instead of rocks. 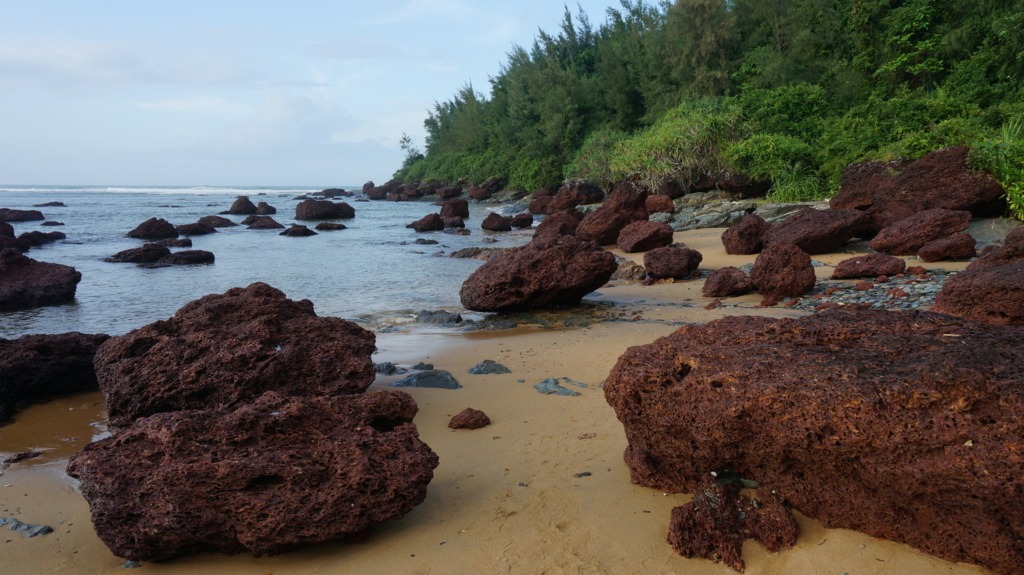 This place wasn’t spectacular, but in the late afternoon the vivid colors made it very beautiful. 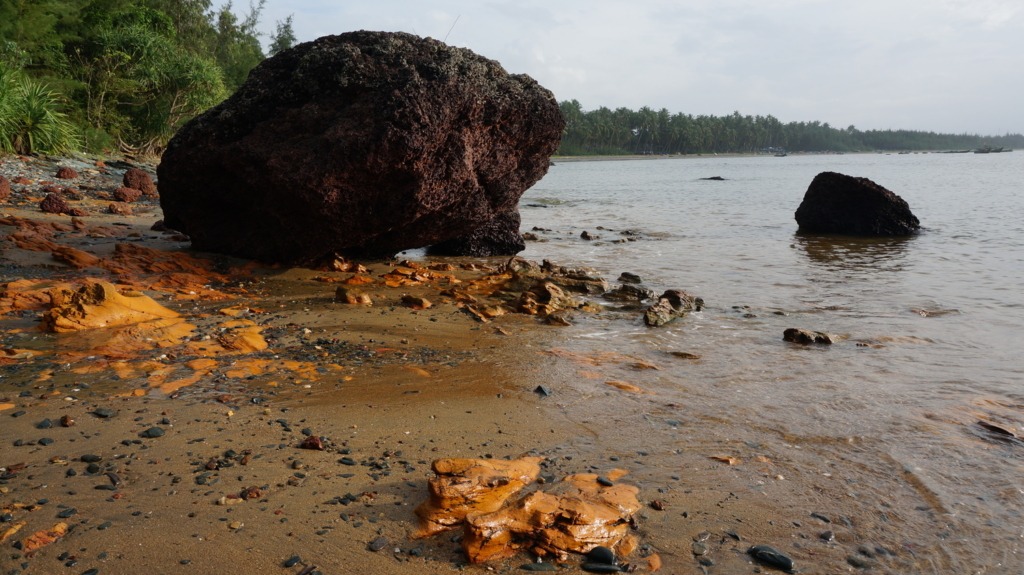 As we headed back, the sun was rather low, and the sea looked surprisingly black and white ! 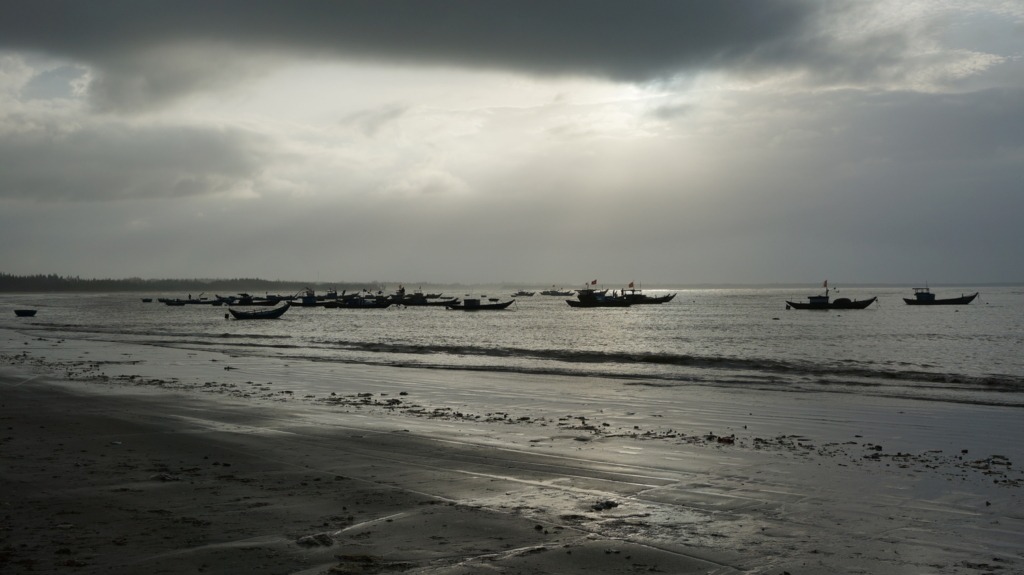 Just like at Tam Thanh, you’ll find many painted walls in the village. Most feature aquatic themes. 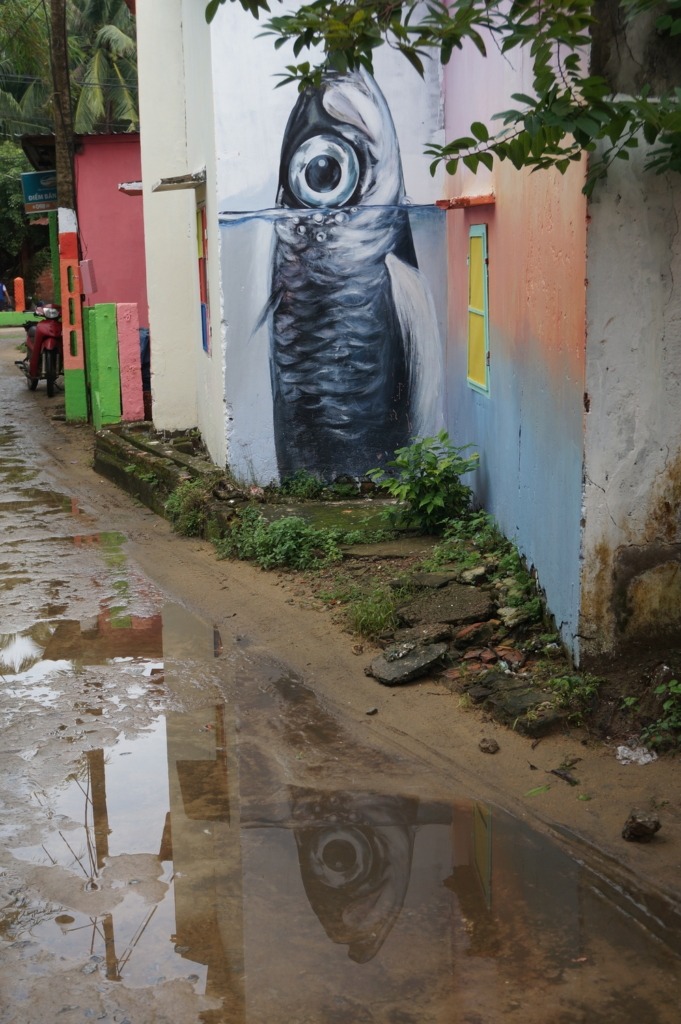 Usually Thanh eats fish, but this time they were ready to strike back ! 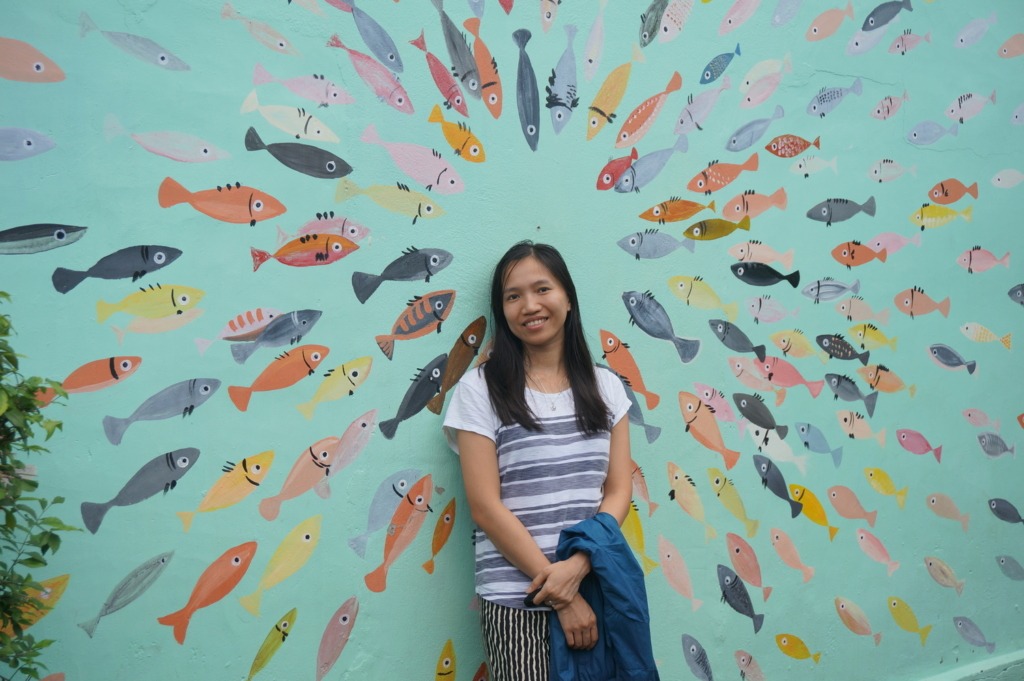 Heading back to Hoi An from Tam Hai

In order to return to Hoi An, we first retraced our way to Tam Thanh. After a long break spent drinking ice coffee, we rode North on the village’s main road, and kept on following this road until we reached Hoi An’s bridge. It was a nice ride, as there was very little traffic (only motorbikes). There were a few opportunities to have lunch but we prefered to wait until we were back in Hoi An.

The only unpleasant part were the last 10 kilometers or so, as a lot of urbanization was taking place there. There were large trucks and the road was very dusty.

A gallery of our pictures can be found on Flickr