The SE21 train provided us with the opportunity to flee the rain that was starting to bothering us. Indeed, since arriving in Mang Den by QL24, it’s been raining every day, sometime very heavily. As Quang Ngai proved to be a rather boring city, we decided to take the train to head South. Read more about our Christmas in Quang Ngai and taking the train in Vietnam !

Getting settled in Quang Ngai

In Quang Ngai, our guesthouse (Bac Nam, 28 Nguyen Du) was pretty basic. When we arrived, the bathroom light was blinking and there were cigarettes butts in a corner of the room. We asked them to fixed this and it took some time; by doing so they managed to dirty the floor and leave another cigarette butt in the bathroom. Well, what did we expect for 150 000 dong (less than 6 euros) ? However we must point out that the owners were actually friendly and helpful, a rare occurrence in Vietnam !

We managed to get our clothes washed. We were fortunate to have a laundry located 10 meters away from our guesthouse. Price was extremely cheap (12 000 dong per kilo, less than 50 euro cents !). We ended up having around 8 kilos of clothes washed ! After the trek around Kon Tum followed by the ride in the cold, rainy weather on QL24, we had nearly no more clean clothes left.

For lunch, we had great spicy noodles in a Korean-inspired restaurant. We were supposed to choose the level of chili on a scale from one to twelve so I of course picked twelve. Few minutes after we ordered, the owner came to warn us that the resulting dish was supposedly very spicy. We asked her to mind her own business and bring the frickin’ noodles, dammit ! It turned out that they were actually spicy, but more like the “average” spice level of our usual Sichuan hot pots. Sissies. The broth was very tasty and I ended up drinking it all. Unfortunately I think that part of the taste came from MSG as I ended up being extremely thirsty all day long.

As it was Christmas Eve, we decided to spend more than usual and go to a nice vegetarian restaurant for dinner. We had corn nems, a local specialty which was okay but not as tasty as the nems Thanh used to cook at home. They were followed by a mushrooms hotpot; we enjoyed it and while pricey (150 000 VND, around 6 euros) it was a large dish and we were full.

After dinner I was still very thirsty, so we ended up in a nearby café. It was a large place with different ambiances; part of it was decorated like ancient Chinese houses, with dark wood pannels. It was very pleasant. Again our drinks were more expensive than usually : we paid 40 000 VND for a smoothie (around €1.50) but it was huge and tasty.

The next day we woke up to the sound of heavy rain falling. It looked like we were stuck in Quang Ngai, a rather bland city, with a depressing weather forecast for the next days. Basically it was supposed to rain heavily in the center and South Vietnam, probably because of the Tembin typhoon. Staying there wasn’t an exciting prospect as there was not much to do in the city. Pedaling all day under a heavy, continuous rain like we got that day wasn’t enticing either. So we decided to take the train further South, where the weather probably wouldn’t be much better but there would be things to do in case it improved (one can always hope…).

Quang Ngai’s train station is rather ugly, but easily reached from our guesthouse.

We went to the office managing freight and our questions about bicycle transportation lead to loud discussions between two workers there. There was a senior who smelt of alcohol, a junior who was basically unsure of everything, and another employee who didn’t care at all. Finally it turned out that we could put out bicycles in the next day’s SE21 train to Van Gia (also called Gia, depending on where you look). We’d have to show up at 9am in order for the employees to pack the bicycles, while our train would be around 1pm. We decided we’d take our bike panniers with us in the train. While not very convenient, it was the safest way to make sure their contents would reach our destination !

Some train lines other than SE21 don’t board bicycles and motorbikes on the same train, forcing you to send them ahead of time. We were lucky to have this opportunity to travel on the same train !

Each ticket cost 189 000 VND each (around 6 euros) for a bit more than 300km (about 6 hours). We choose to have soft seating with air conditioner. A cheaper choice was hard seats, while a more expensive one would have been a cabin with bunk beds, useful for longer, nightly train rides.

Checking in the bicycles

On the next day we rode to the train station again, and deposited our bicycles at the freight office. The employee there (not the same as yesterday) announced that it was not possible for to disembark the bicycles at Van Gia. WTF ? Thanh went to the office to discuss it again while I checked the bicycles and bags. Finally it turned our to be okay. There was a fee of 150 000 VND for protecting the bicycles, and the transportation fee itself was around 120 000 VND. Our bikes ended up being partially wrapped with cardboards. 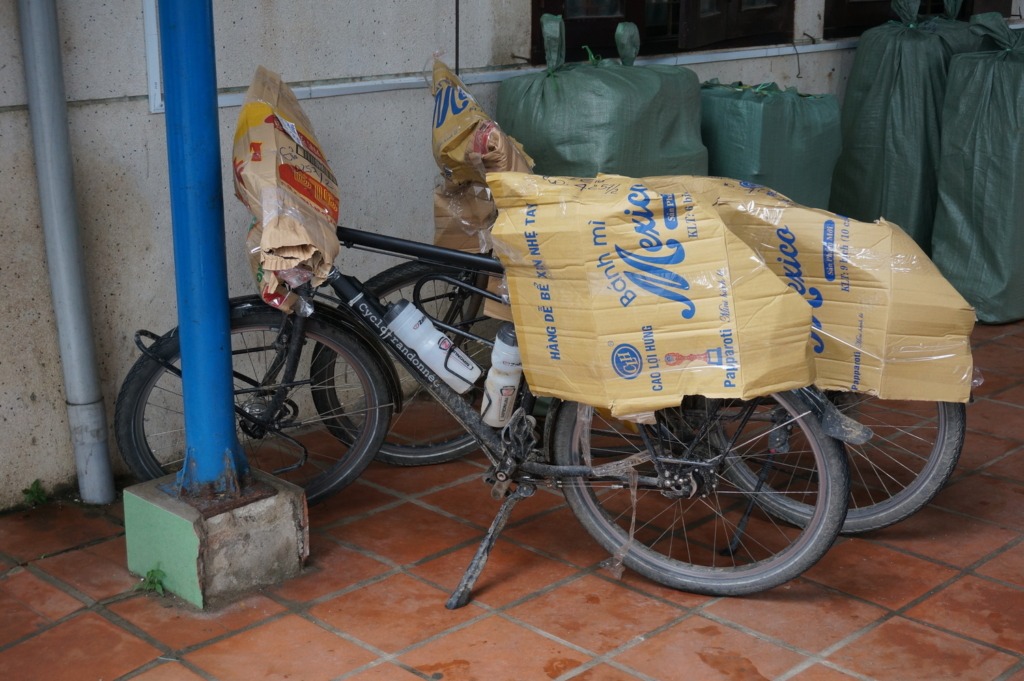 A bit further, employees were building racks in order to protect motorcycles. 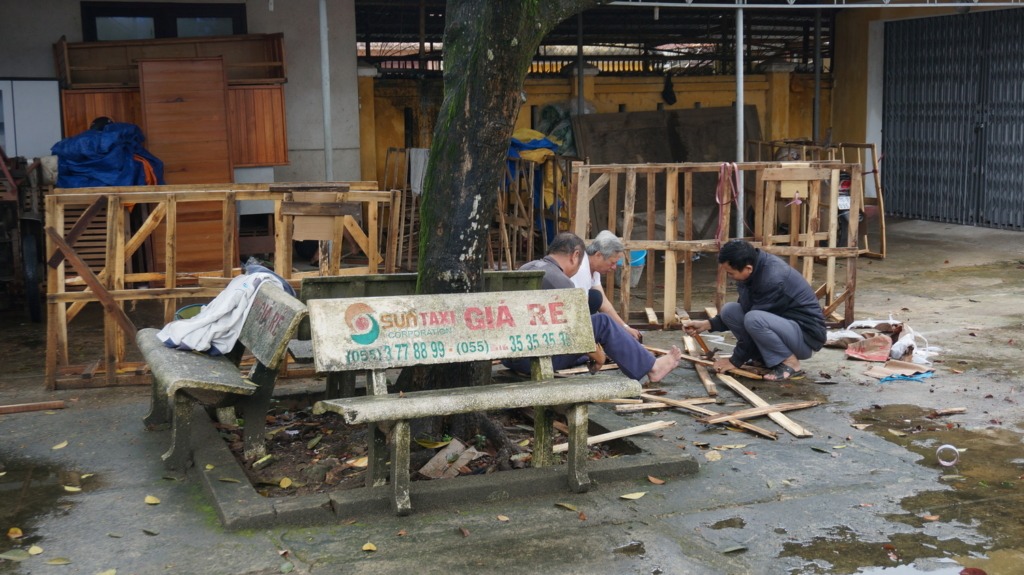 We then killed the time in the café in front of the station, and watched a ridiculous Indian TV show on the waiting room. Several trains arrived, and we saw decorated bunk beds. 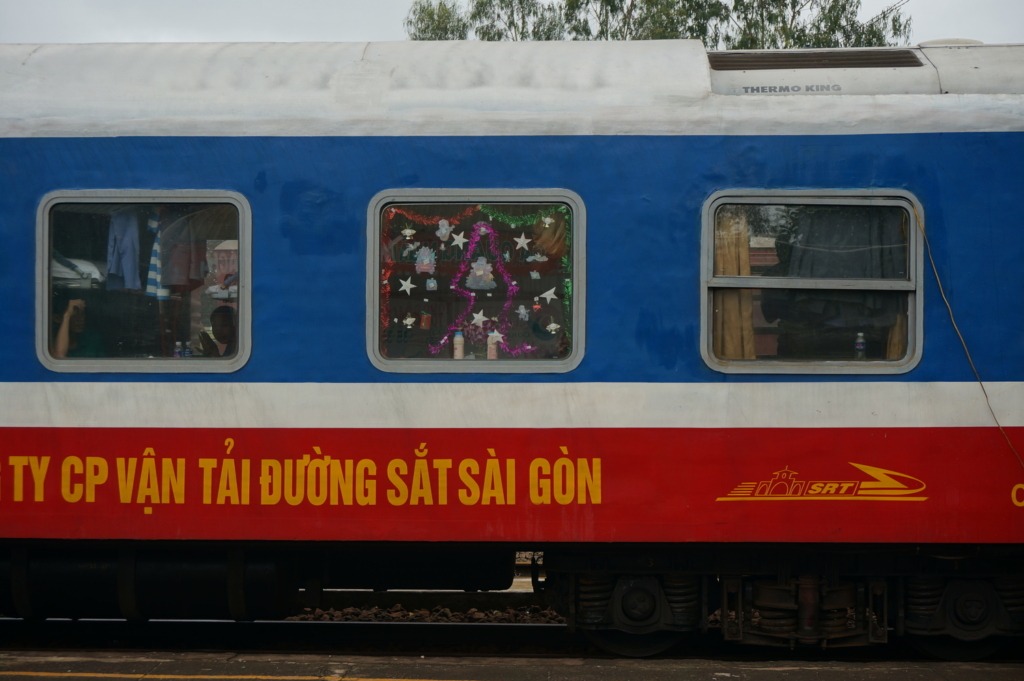 Our SE21 train arrived on time and after showing our tickets and IDs, we boarded it. There was plenty of room for the luggages in the overhead racks, a welcome change from France ! However they were located very high, so small people would may have troubles storing and retrieving their belongings.

The SE21 coaches are fairly recent. The seats were rather comfortable; they could recline and had USB plugs (we didn’t check whether they worked). Food and drinks carts passed regularly, selling basically any food item you could possibly want. During long stops, many additional sellers came to sell even more food products.

While the start ride was overall surprisingly quiet for a Vietnamese ride, it unfortunately didn’t last. There were TV screens initially didn’t work (hooray), but them some dumb-ass fixed them. It allowed us to enjoy Vietnamese culture by watching typically local broadcasts such as American Ninja Warrior New Jersey or Maria Carey singing All I want for Christmas is you. Add to this the constant phone calls, loud conversations and dumb videos played on mobile phones, and you’ll understand why I was happy to travel with my sawed-off shotgun MP3 player.

The scenery was pleasant. There were many rice fields, sometimes with a lone tomb right in the middle. The QL1 was never too far however, as the railroad track is mostly parallel to the highway in this area.

As Vietnam still uses a single-track railway, the train stopped a few times in order to let another train going in the opposite direction.

The SE21 arrived around 15 minutes late, which was not a big deal. Disembarking our many bicycle bags was a bit stressful as the stop was very short. It was totally dark when we left the train, but above all the weather was warm and dry ! It gave us an instant morale boost.

Picking up our bicycles was surprisingly easy, and we didn’t have to pay any additional fee. From the railway station we quickly reached the QL1. We carefully crossed it in order to get closer to the sea, where accommodations are located, and checked in at a nice motel before having dinner.