ATM fees can end up eating a large part of your budget when traveling in Asia. As most Asian economies are based on cash, you may have to withdraw money very often. Unfortunately, in most cases this will incur two kinds of fees. One will be taken by the local bank, and the other by your own bank. While the specific figures may vary, both of these are usually around 2% of the withdrawn account – often with a minimum fee for the local bank -. That means that around 4% of your local expenses may end up feeding your banker !

We found two ways to reduce these ATM fees. Let’s find out how !

Thanh has a Vietnamese bank account. By sending money from our French account to her Vietnamese account using Transferwise, we pay a fee of around 1.5% from sums larger than EUR 300. Withdrawals are then free at ATMs from her bank, and with nearly no withdrawal limit.

The money transfer process is really straightforward. After creating my account, I choose the destination country and the amount to send. Transferwise then displays the fees and the estimate exchange rate. I then wire the money from my French account to Transferwise; it’s also possible to pay by debit or credit cart, but the latter will incur additional costs. I started the transaction on a Friday afternoon (French time), and the money reached Thanh’s bank account the next Tuesday ! That’s extremely quick; note that the delay may depend on how quickly your bank will process the wire.

As a side note, we also tried to send money through Azimo. We weren’t convinced by their exchange rate; while the displayed fees are reasonable, the exchange rate was rather low. Another competitor to Transferwise is CurrencyFair, but they currently don’t support Asian currencies.

Using this method, we send usually money twice a month and pay no other fee ! Moreover, we have a large withdrawal limit with the local bank, unlike when we use our foreign credit card.

While this is the optimal solution, not everyone can open a bank account in another country. For example, once we’re in Thailand this method won’t work for us anymore. There, we’ll use another strategy. While a bit less cost-effective than a local account, it greatly reduces the fees usually taken by the bank.

One small drawback of using Transferwise is the slight delay until the money arrives in the local bank account. You have to plan the money transfer a few days ahead of the withdrawal !

In France we were happy costumers of Boursorama Banque. While we totally recommended it while living there, it’s not adapted anymore to our new lifestyle. Indeed, they end up taking a bit less than 2% for every withdrawal. Our estimated budget in Vietnam is €25 a day, so around €750 by month. 2% of that amount already amounts to monthly fees of €15, or €180 yearly !

We ended up signing up for a N26 Black card. For €5.90 per month, its main perk is unlimited foreign withdrawals without fee. As a result, we only end up paying the local bank’s ATM fees. Our aim is then to find banks with the lowest fees. The provided card is a Mastercard, and is thus accepted virtually everywhere.

Another advantage is that there’s zero fee when paying with your N26 Black card worldwide, while Boursorama would impose a fee of 1.95%. For example, if we book an hotel in Vietnam via Agoda, we don’t have to worry about the incurred fee.

N26 registration process was rather long; instead of the 8 minutes it’s supposed to take, it was closer to half an hour ! The passport check was tedious and it was hard to understand the instructions, due to a poor connection quality. However once the registration was complete, I very quickly received the card and could start toying with the N26 app.

It’s available for Android and Apple. Its many features include :

The drawback of using a foreign card in Asian countries is that we have to compare ATM fees and limits for each bank of the country we’re in.

Here’s an overview of the pros and cons of these two methods :

Cost-wise, they’re mostly equivalent as long as you find an ATM with low fees.

However, in Vietnam, where we have access to a local account, we prefer to use Transferwise in order to avoid the annoying comparison of ATM fees. Indeed, comparing ATM is not only inconvenient but also a bit stressful; we prefer to use our credit card as little as possible, due to the risks of skimming (see below).

ATM fees may be annoying, but withdrawing money is actually also a rather stressful process. I often pointed out that Vietnamese are allergic to any kind of maintenance, and this seems to include ATMs as well. As a result, several of them will be out of service, or reject your transaction because they’re out of paper. The other may abort the transaction more or less randomly, or reject your card from the start. In addition to this, many ATMs located in front of a bank’s premise will probably be unavailable once the bank is closed.

We thus advise you to withdraw cash early, instead of waiting for your bills to run out; this will prevent a lot of unnecessary stress !

We mostly use SacomBank, which allows to withdraw VND 3 000 000 with a 1.5% fee. I’ve read about much larger limits – as large as twenty million dongs – but was never able to withdraw that much. Your mileage may vary ! Another choice is DongA bank, but their ATM network seems less large than SacomBank’s. 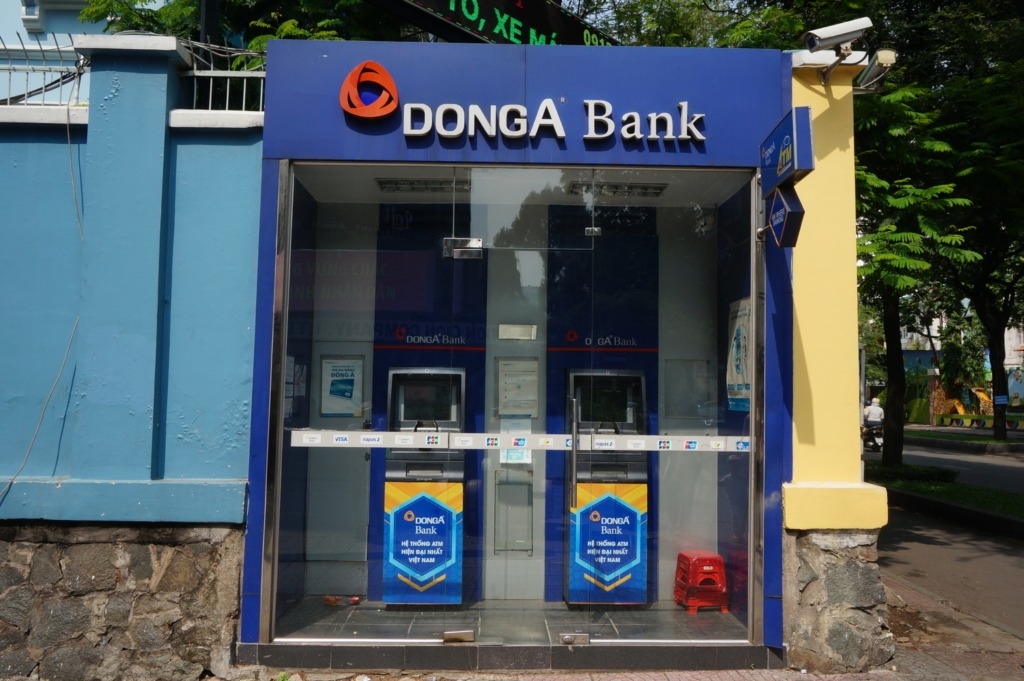 My experience of ATMs there is limited, but the two ATMs I used were in pristine conditions. At ABA bank, the security guy outside politely asked me to take off my sun glasses in order to use the ATM, which I think is great for safety ! Additional safety measures included a camera recording me, and a movable cover to hide the keypad. Unlike in Vietnam, withdrawing money in Cambodia was a totally stress-free experience !

In Cambodia, most banks seem to charge flat ATM fees around $5, however the withdrawal limit seems to be rather large. ABA bank charged me $5, and I was able to withdraw $380; these fees amount to around 1.3% of the withdrawn account. That’s much lower than what I usually paid in Vietnam, where I sometimes paid 3% as ATMs with lower fees were unavailable (see below). As a side note, I read that Maybank doesn’t charge ATM fees; however the Maybank ATM I used didn’t accept Mastercard so I cannot confirm that.

Using ATMs in Laos : BCEL is your friend

Most ATMs we tried rejected my card, or asked for fees as high as 3%. The only ATMs which consistently worked well were from BCEL brand; they allowed me to withdraw up to LAK 1 500 000 (around €150), for a local bank fee of LAK 20 000. This amounts to a bit more than 1.3%, which is reasonable. However, the drawback of this small sum is that we had to withdraw money relatively frequently. Hadn’t we used N26 Black card which allows free withdrawals, the resulting fees would have been very high !

Surprisingly, ATMs in Thailand were a mixed bag. In the small border city where we arrived from Cambodia, there was only one ATM and it rejected my card (as it did with the tourist using it before me). This was right after Thanh’s bicycle accident so I had to change some dollars in the street (see below) as we needed a transport to Trat. Later things worked out better but ATMs were sometimes confusing or didn’t accept my card, one again. The withdrawal limit seemed very high, as I was able to withdraw the equivalent of €500 (I didn’t try larger amounts). There seems to be flat fees of THB220, regardless of the branch. It’s a rather large amount, but with an equally large withdrawal limit, it’s not necessary to make several withdrawals.

Safety considerations when using an ATM

Here are our recommendations to withdraw money from ATMs in a safer way :

In Thailand, I had to change dollars on the street. The resulting cost was below 5%; I didn’t try to negotiate as the sum was small and we were under stress at that time. Overall I wouldn’t advise you to change on the street for obvious safety reasons; however in this case it was our only choice.