Savannakhet was our last stop in South Laos. Like Champasak, Kampot in Cambodia or Sa Dec in Vietnam, it featured a beautiful river scenery and crumbling colonial architecture while being mostly ignored by tourists. Did we enjoy it as much as these other places ? Let’s find out !

First we had to get back on highway 13, spending the night in Salavan. The quick ride between Tad Lo and Salavan was very pleasant, passing through small villages via a road bordered with fields. Salavan itself had little interest; this sleepy city didn’t have much charm, our guesthouse was forgettable and food was so-so.

From Salavan to Napong, road 15 was extremely quiet. Although the scenery wasn’t especially impressive (it was dry season so most rice fields were empty), it was still pleasant to look at. 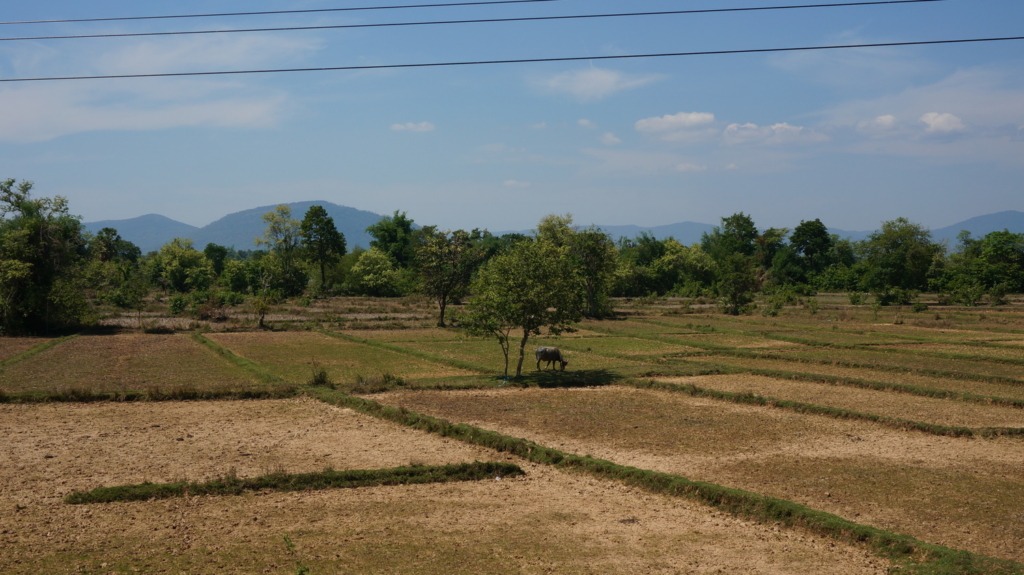 Finding food for lunch was a bit though that day as the few villages we came across were very small, but we ended up eating a good noodle soup. To my great despair, finding iced coffee proved to be impossible.

Napong is located at the crossing between road 15 and highway 13. Napong’s guesthouse, called Keobouasay Guesthouse was an excellent surprise. If the owner was rather unpleasant, the accommodation itself was absolutely great. The room was clean, spacious and well maintained, and there was a cute seating area with many trees and plants in the middle. Back on the main road, a charming old lady made great noodle soups and sugarcane juice.

Cycling from Napong to Savannakhet

We were a bit concerned about cycling conditions on highway 13, which is one of the country’s main roads. Fortunately the traffic was very light, and the road surface really okay.

Our accommodations on this road were rather bad, especially after the great night we had in Napong. The crazy heat meant we couldn’t cycle really long distances; as a result we spent the next night in a guesthouse which looked shabby and wasn’t really clean. And the next night, as we were only 30 kilometers from Savannakhet, we stopped in Hongtong guesthouse, right before the road turns toward Savannakhet. It was well reviewed in Google Maps but didn’t convince us, being extremely basic for the price (hello, water bucket restroom !).

Food along the road was globally better than accommodations; we mostly had tam mak houng, a green papaya salad similar to Thailand’s som tam. However, if these two dishes share similar ingredients (tomato, lime, fish sauce, chili and garlic), in Laos it has even more character. The fish sauce smells much stronger, the quantity of garlic is much more important, and to my great surprise the amount of chili is insane. I expected food in Laos to be rather bland, but actually it’s often much spicier than in Thailand. Even though I’m used to having crazy hot food from Sichuan, the tam mak houng sometimes brought tears to my eyes !

For most tourists, Savannakhet means little more than an opportunity to get a Thai visa before crossing the border to the nearby Mukdahan. For us, it was a wonderful place to relax, enjoy architecture, hang out in nice cafés… and be involved in New Year’s celebrations !

All around the night market stand many colonial houses in various states of disrepair. The ones very close to the market are usually very well restored, while those further are more or less left crumbling down. The result is often striking, like the following wall. 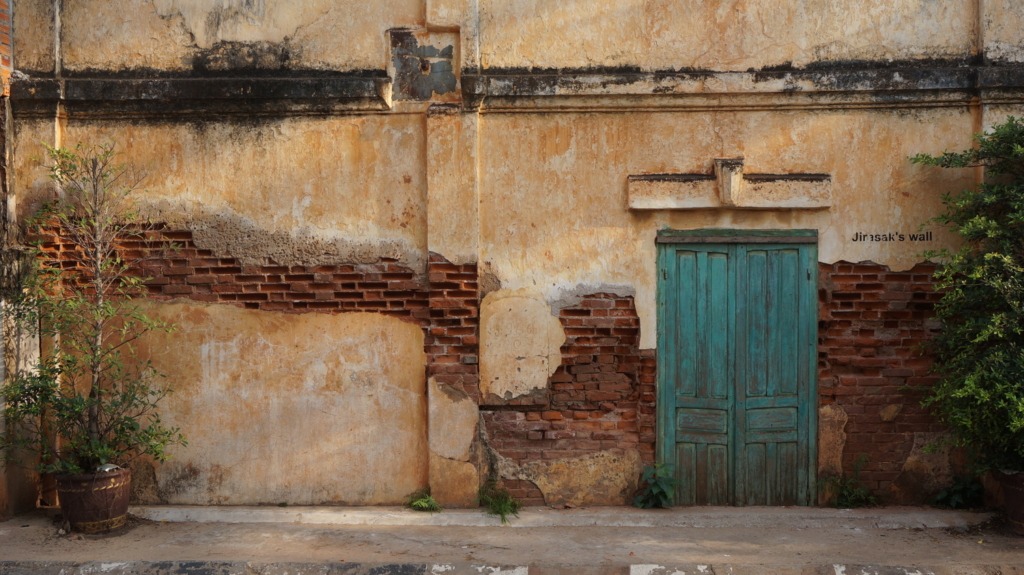 In addition to these colonial houses, interesting examples of more recent architecture can be seen around the city. Surprisingly, these include two movie theaters : the art deco Lao Chaleun, and the Khounsavan cinema, which is apparently still in activity. 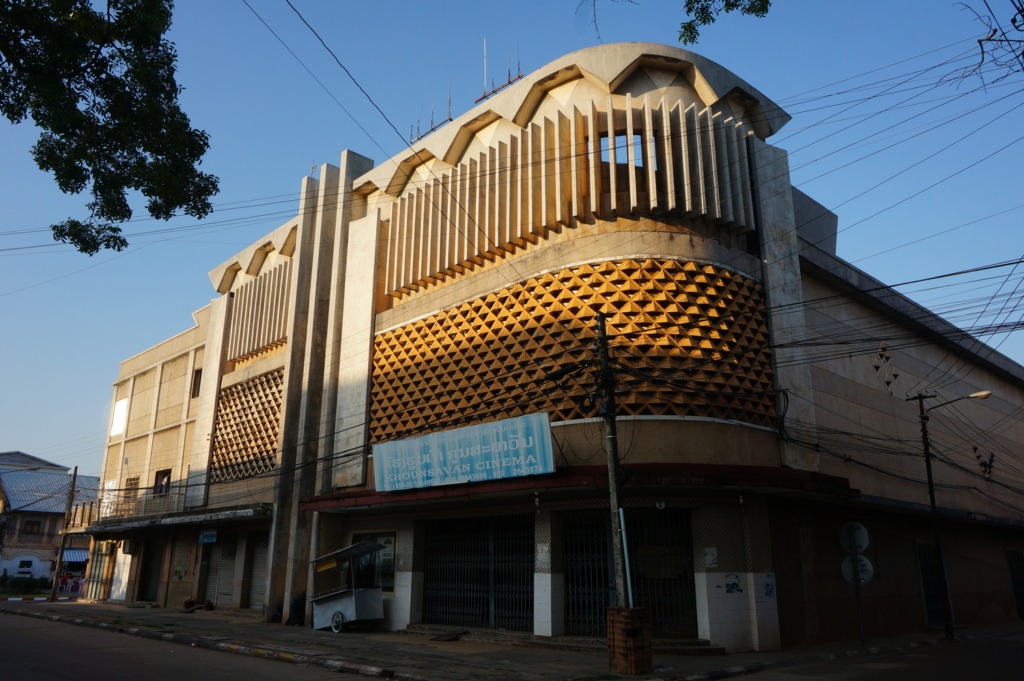 The quiet banks of the Mekong were among our favorite places for lunch and dinner. Many small restaurants served basic food and drinks, and it was very enjoyable to just sit there and enjoy the view. At sunset it was even better ! 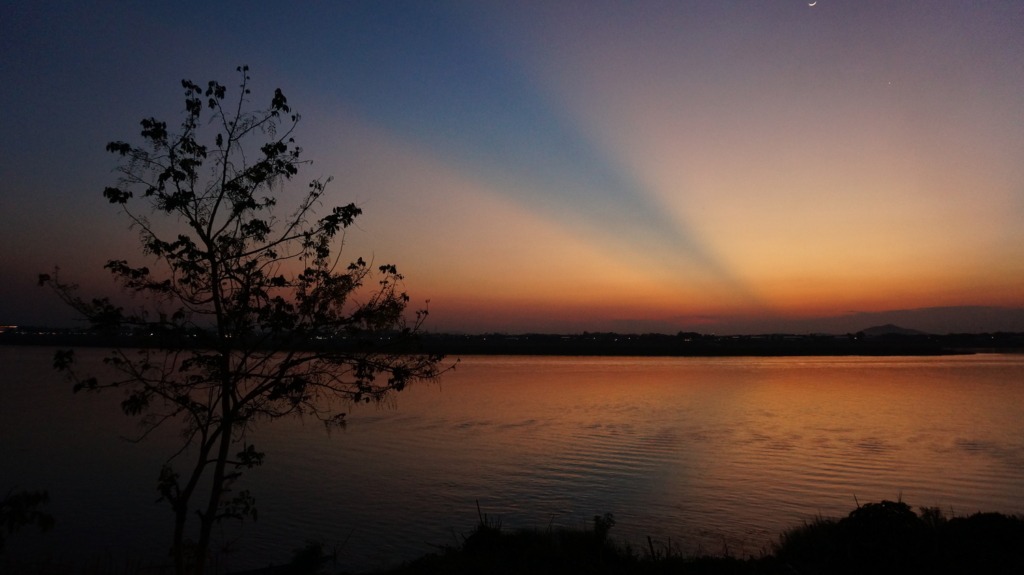 Let’s face is : Savannakhet is usually a very sleepy down (and that’s why we liked it 🙂 ). Bur for the New Year, the ambiance became totally crazy. People were everywhere on the street, throwing water at each other – especially at innocent passing cyclists 🙂 -. Children used water pistols or water balloons, adults threw whole buckets of water. Extremely loud music blasted through huge loudspeakers, with young people dancing all day and night. If you want to see what it’s like, one of Thanh’s articles features a short video filmed during Pi Mai.

We also witnessed a small procession; on one side, many monks were thrown water at by the spectators, while on the other side, old ladies performed traditional dances.

Overall these three or four days of water festival were incredibly fun. Everybody was smiling and enjoying life. What’s better than a water battle when the temperature reaches 45° Celsius ? And then, as suddenly as it had started, everything stopped and Savannakhet returned to its usual lethargy for 361 days 🙂

We booked up one of Sala Tongyon‘s bungalows well ahead of time, because of our concerns regarding accommodations’ availability during New Year. These bungalows seemed very attractive, and received excellent reviews. Unfortunately, we were rather deceived by our stay there. Our main concern was the crazy heat inside the bungalows : the roof was made of metal, which made the inside temperature very high. The fan was very weak, and wasn’t centered on the bed, making it basically useless. The price for air conditioner was prohibitive : 60000 additional kips (around 6 euros), when everywhere else it was around 3 euros for a much larger space. In addition to this, there were many mosquitoes, and although there were many plants around, it lacked a pleasant seating space. Compared to Fandee Family‘s bungalows in Tadlo, we were very deceived. Maybe this place would be great when the heat is less intense, but at this time of year it was just not worth it. As a result, we decided to switch to another place once our initial booking was over.

While from the outside it may look like your usual guesthouse, this place was actually one of the best accommodations we’ve had during our whole bicycle trip. The owners were extremely pleasant and smiling; the rooms were extra large, clean and came with a huge fridge and a desk. A basic breakfast was included (one fried egg, baguette, butter & jam, and bananas from the garden).

In addition to the places listed below, many stalls sold baguettes filled with pate, fried eggs or even cheese. Weirdly, I found their overall quality higher than in Vietnam ! Many drinks stalls were also found throughout the city, and sold delicious iced coffee. It was usually strong and sweet at the same time, and was my favorite drink in Asia to date.

After spending one month enjoying the night markets in Thailand, we missed them in Laos. While Savannakhet’s one really can’t compete with the ones in Thailand, we really enjoyed eating there. The surrounding colonial houses made it a very atmospheric place, and the food was food. We even had some coconut ice-cream !

This beautifully decorated café served great drinks. On our first visit we spent a lot of time on the ground floor, enjoying the air-con and fast wifi. We came back for dinner in order to enjoy the view from the rooftop. While we totally enjoyed the beautiful Mekong banks, the food was only so-so, and the staff was rather dull and bored – unlike the friendly owner we met during our first visit -.

Note that they also offer rooms, which unfortunately seemed too expensive to our taste. 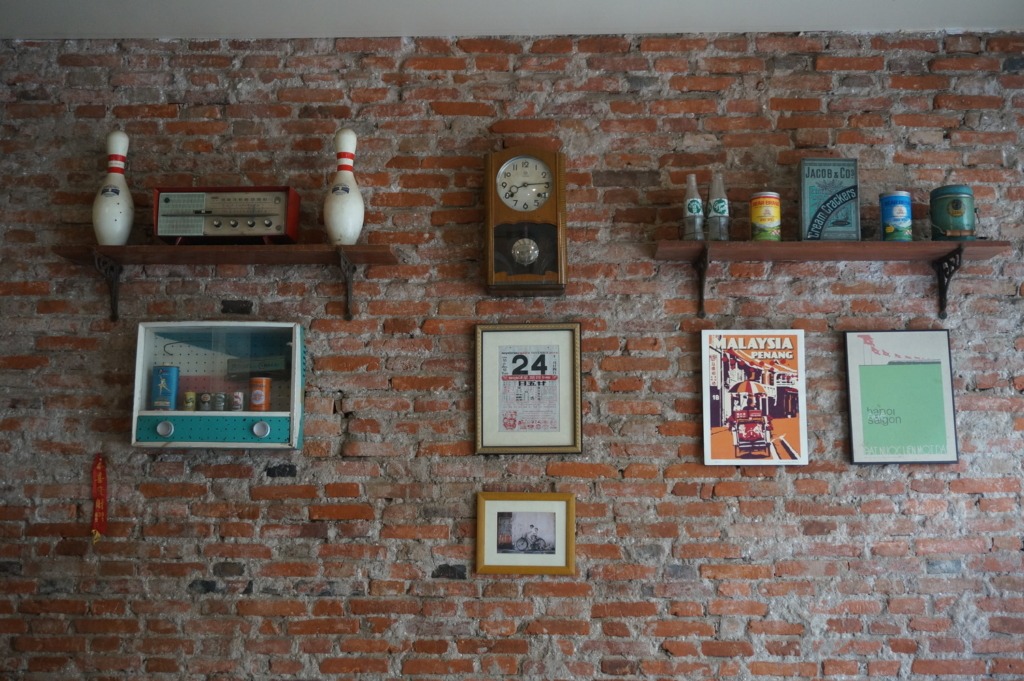 Our visit there started badly. The owner asked us to move our bicycles, as they were parked in the parking area for cars. Trouble was, there was a huge pickup truck taking most of the motorbikes’ parking lot, leaving no space for us. As a result we had to leave our bicycles in a way that made it difficult for riders to leave. We found it so stupid that we nearly gave up and left.

However the food was great, and helped us forget the incident. We both had mushroom dishes : a tom yum with mushrooms, and fried mushrooms. Weirdly, the drinks menu was very poor. There was no cocktail, shake or any kind of fruit juice; the choice was either beer (several of them), or soda. Crap. As expected, the Mekong view was great; The terrace was located at a lower floor than the nearby Savan café’s rooftop, but it was slightly closer to the river.

Located close to our guesthouse, this café serves drinks – including rather pricey cocktails – and both Western and Asian food. We tried the Western part of the menu, and ordered a hot dog and a vegetarian burger. They were tasty and rather filling; it felt good to indulge in some junk food 🙂

Located in a corner of the market, this beautiful and peaceful café serves both food and drinks. We only had cold drinks there, and they were excellent; the staff was friendly and welcoming, and we plan to taste the food next time we’re back in Savannakhet !