Few travelers know about the QL24, a beautiful road linking Kon Tum and Quang Ngai. I read about it on Travelfish, as usual; however, I found very few details about cycling this road. As a result, as we left Kon Tum behind, we had basically no idea what to expect. It turned out that the road itself was great, but unfortunately for us the ride was spoilt by an awful weather.

Cycling the QL24 from Kon Tum to Mang Den

After leaving Kon Tum, the QL24 goes through many minority villages. The road is wide and overall in a very good shape. Several rong houses are visible from the road. For those who didn’t trek minority villages around Kon Tum, this ride may provide a great opportunity to take a few impressive shots.

The first half of the ride was supposed to be easy cycling, with gentle climbs and downhills. There was little traffic and it even decreased as we proceeded ! Unfortunately for us, there was a crazy wind that day. It as so strong than even going downhill was slow and painful ! We later found out that it may have been caused by the Tembin typhoon, which was devastating the Philippines at this time.

At the crossing of DT677 and QL24, there’s a large town with several motels (Google Maps and Open Street Maps disagree about the name of this town). We considered staying there due to the terrible riding conditions but finally decided to push on to Mang Den. After leaving the city, the QL24 is a bit more deteriorated but it doesn’t last.

Actually, when the serious climbing starts, the road is absolutely shiny new, making it a terrific place to ride… if it weren’t for the wind. As we went up, we finally saw real forests around. The tree-hugger inside me welcomed that change from the depressing scenery around Kontum ! 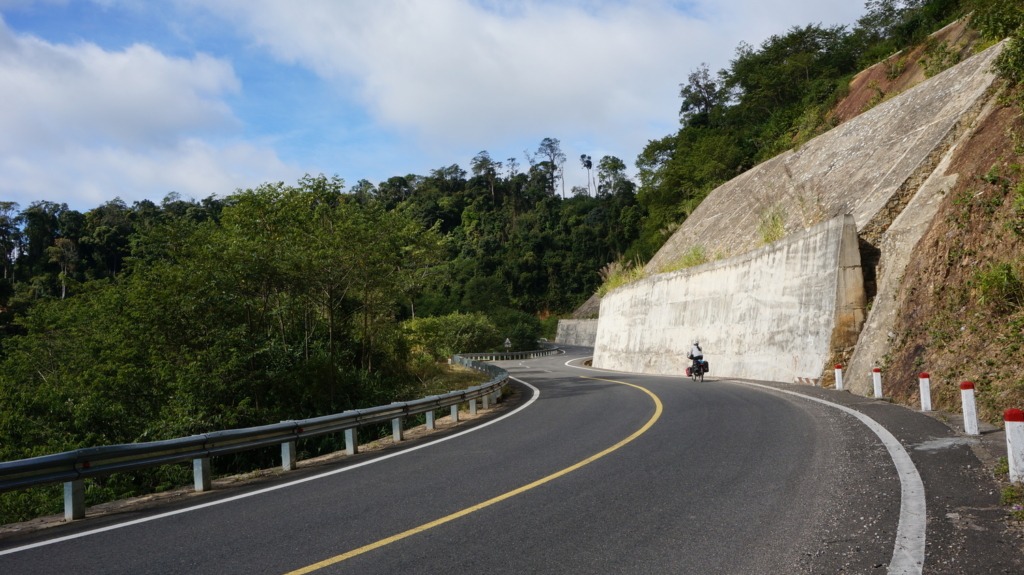 While we were protected from the wind in some parts of the QL24, at other times strong sideways gusts were very dangerous. It was really a bad cycling day, and it was very frustrating as it could have been absolutely great !

Mang Den : a ghost city in the middle of nowhere

We had absolutely no idea of what to expect at Mang Den. Informations on the English-speaking web are nearly non-existent. We went through a long road bordered with hotels. While many looked very recent, other were apparently abandoned in the middle of the building process. There was nobody outside, and this place seemed to be absolutely devoid of people, including inside the small restaurants along the street.

We stopped at E Ban hotel, which looked great from the outside. The owner asked for 300 000 dong, which we managed to decrease to 250 000 dong. Let’s face it, it worst the worst place we stayed at in Vietnam until that day. While the room looked okay, the bathroom was absolute crap. There were so many wrong aspects that I can’t even enumerate them all… The window didn’t close, in spite of the very cold weather outside. Also, it was dangerous to shower because of the power switch located very close. But the worst aspect of the hotel came from the sleeping room. It was absolutely freezing inside; the temperature was actually even colder than outside !

We had a quick and totally bland dinner at a nearby restaurant, then went to sleep with our clothes on, covered with two blankets. As I woke up the next day, I felt very weak and sick, probably because of the crazy cold. We decided to stay in Mang Den but switch to another place asap.

Two kilometers later, we entered the city of Kon Plong (which is where buses from Kon Tum stop). We didn’t spot any hotel or motel apart from the Cat Tuong, nearly at the border of this small city on DT 767. Fortunately for us this place was much, much better than E Ban while costing the same price (250 000 dong). The staff was nice, the room was bright and at a correct temperature, and both the room and the bathroom were very clean. After settling down, we drank an excellent lemon tea as the motel also serves as a small café. I spent most day in bed, trying to get some energy back. Finding food was easier in Kon Plong than in the main road; we actually enjoyed a very good dinner that evening.

After inquiring at the motel, we learned that there are several attractions in Mang Den. They include one waterfall, a pagoda, a lake… However, looking at the weather forecast, we realized that we had better leave the area quickly. Actually the next day seemed like the best option, with less rain and  wind planned than the following days.

Mang Den to Ba To

I felt much better the next morning, and we checked out early as the cycling day on QL24 promised to be though.

After around 5 kilometers of a pleasant downhill, the serious things started for 30 kilometers. We went both up and down… but uphills were much more frequent. The only traffic was local motorbikes, apart for a few very occasional trucks. It was very pleasant to ride in silence ! The surface of QL24 was definitively not as good as the previous day. Actually it was a bit weird, with a few hundred meters of shiny new road, followed by a rather bad surface, and then again a great one…

While the wind was much weaker than the previous day, there was a nearly constant drizzle which made the ride unpleasant. At some point there was also a very heavy fog which dramatically reduced the visibility. So, once again, we don’t have many pictures to share. And it’s unfortunate as the scenery was great. We went through many small villages, many of which featured only wooden houses. 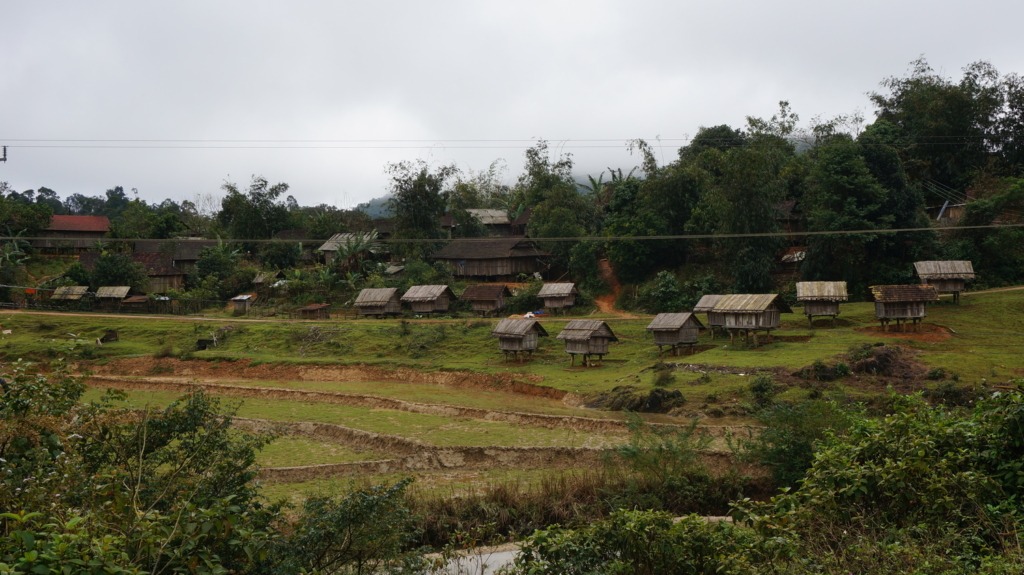 We still got kind of lucky, as it mostly stopped raining just as we started going downhill. And what a downhill ! Nearly 30 kilometers with nearly no climbing at all, surrounded by a very beautiful scenery. We enjoy every second of it. 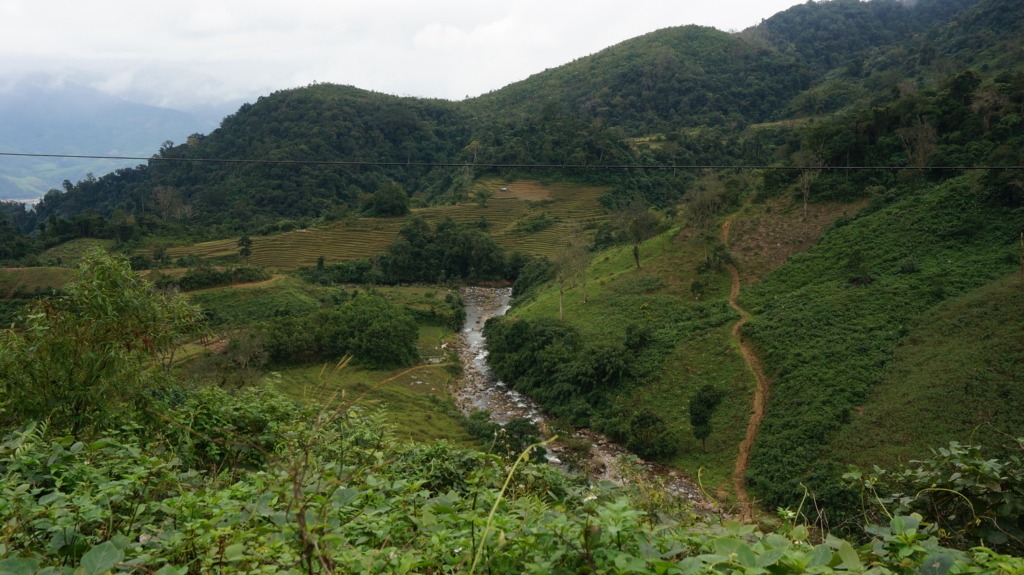 The road surface was overall great during thedownhill, but we nevertheless had to control our speed due to a few bad parts. 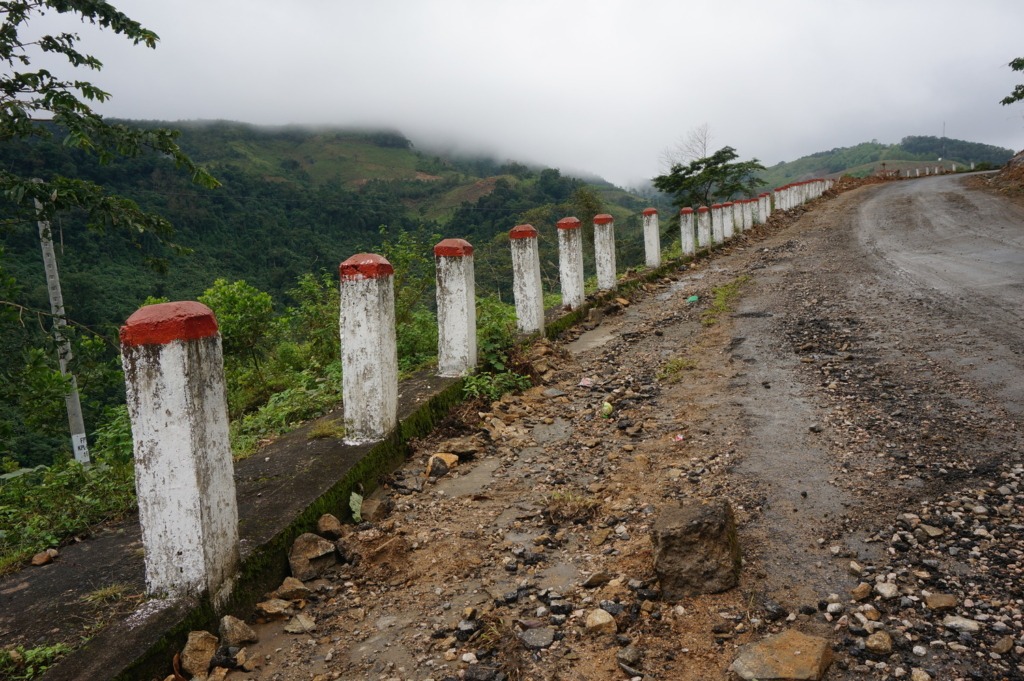 Even as we reached the bottom of the mountains, we were still in a very beautiful area. We rode through rice fields which were surprisingly green at this time of the year. 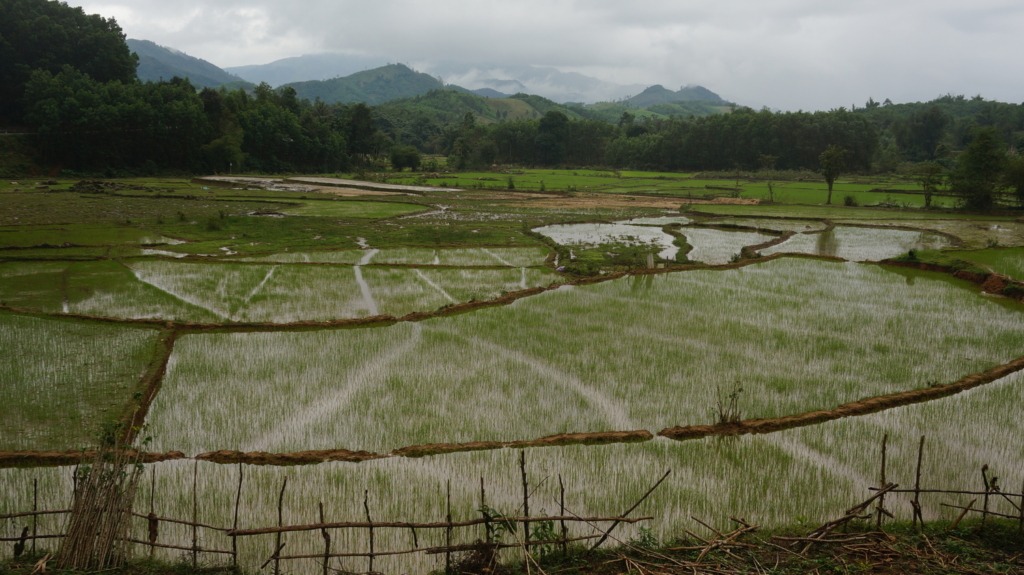 We also rode through many rural villages, some of which were very picturesque. Unfortunately it was rather late and we wanted to reach Ba To before the night, so we didn’t stop to take pictures.

Ba To, a forgettable city

Ba To is a small, sad city. As it was late, we had a hard time finding a decent place for dinner. Although the room in our motel (Tan My guesthouse) wasn’t as bad as it appeared first, we had a very bad sleep that night. Indeed, between the dogs barking and the owner’s caged birds singing, it was hard to fall asleep. And very early the next day, there was loud music, advertising through loudspeakers and other annoyances. In most other places it wouldn’t have been a concern… but there, there was no window, only a shutter to prevent the rain from entering ! We could thus “enjoy” all this sound at maximum volume.

Another very weird thing is that as we left the city, we wanted to buy banh mi for lunch – as we do nearly every morning-, but didn’t find any stall selling them ! It’s the first time in one month that it happens to us. We thus left Ba To without having bought lunch ahead of time, but the ride promised to be short (less than 50km) so it wasn’t a concern.

Ba To to Quang Ngai

After a bit less than 15 kilometers on QL24, we took the DT624B on the left. This road was perfect for cycling : it was in excellent conditions and there was very little traffic. The scenery was far from spectacular but the road took us through more rural villages and fields, which is always a pleasant time ! Unfortunately and once more, the rain prevented us to really enjoy this cycling day.

After 15 additional kilometers we took the road left in order to cross the bridge and ride the DT627. This last part of the ride was a bit more crowded but still pleasant; as usual the road deteriorated as we approached a large city, in this case Quang Ngai.