Phnom Penh wasn’t originally part of our Cambodian itinerary; however, as it was rather close to the place where we crossed the border, we decided to spend a few days in Cambodia’s capital. This proved to be an excellent idea, as we greatly enjoyed staying there !

Reaching and crossing the border

We left early and started cycling the 25km distance to the border, on DT953 then QLN1. There was little traffic so it was a rather quiet ride. The last Vietnamese city we passed through was Tinh Bien; from there, we crossed a long bridge and quickly reached the border.

On the Vietnamese side, we had our passports checked first, then had to go to another office to get them stamped.

Once on the Cambodian side, I first had to request a visa on arrival; Thanh didn’t need one thanks to her Vietnamese passport. I was welcomed by a smiling police officer who spoke an excellent English. After filling up a small form, I had to provide a photograph as well as $35. Hmmm, wasn’t it supposed to be $30 ? However I didn’t find the price stated in any official Cambodian website and clearly didn’t want to bother, so I paid the price and got a shiny visa sticker on my passport. Next step was getting my passport stamped; there was a tourist group ahead of us so it took some time. Thanh had to pay a fee of VND 40 000 (around €1.50) while I was not asked for additional money. The custom officer took a picture of me, and recorded my fingerprints. I then had to fill an arrival/departure form, and off we went !

What immediately struck us on the Cambodian side was the silence. No more honking ! What a relief….

The road surface was mostly okay, while the scenery was somehow less green than on the other side of the border.

The hardest part that day was, well, understanding how everything worked… especially food and drink-related matters ! We stopped in a small market for lunch, and managed to get a basic noodle soup. Later in the afternoon, we stopped for a sugar can juice; the lady selling it was very smiling, like most people we met. What a change from most of Vietnam !

Takeo : the least busy place ever

While Takeo is the capital of the province, it was one of the most quiet place we ever went to. There was incredibly little traffic, and as a result the city was very quiet. It was even more striking after spending more than two months in noisy Vietnamese cities ! What a contrast…

We had booked a room for $8 in a basic guesthouse named Mittapheap. It proved to be even more basic than expected, with the room being very dark and the beds very soft. The room we booked was a double room, but we ended up in a twin room as there was no more double room available. However, the room was clean and we slept very well. The owner was very nice and spoke some English.

(We went back to Takeo a few days later, after our stay in Phnom Penh, and stayed in an excellent guesthouse)

For breakfast, we went to the market and bought several kinds of sweets. We added an iced coffee bought on the street for a great breakfast; it was a welcome change from Vietnam’s banh mi.

A bumpy and dusty ride from Takeo to Phnom Penh

It was an exhausting cycling day ! While the distance was less than 80km, the road (Highway 2) was rather bumpy and dusty. The high temperatures also worsened the cycling conditions, and as we reached Phnom Penh we were extremely tired.

This large complex was a very impressive sight and provided many opportunities to take pictures, especially in the late afternoon light. The entrance fee was very high : R40 000 ($10) for foreigners, while locals paid forty times less ! However, we really enjoyed this visit. It was one of the rare occurrences we didn’t regret paying for a visit or an activity. 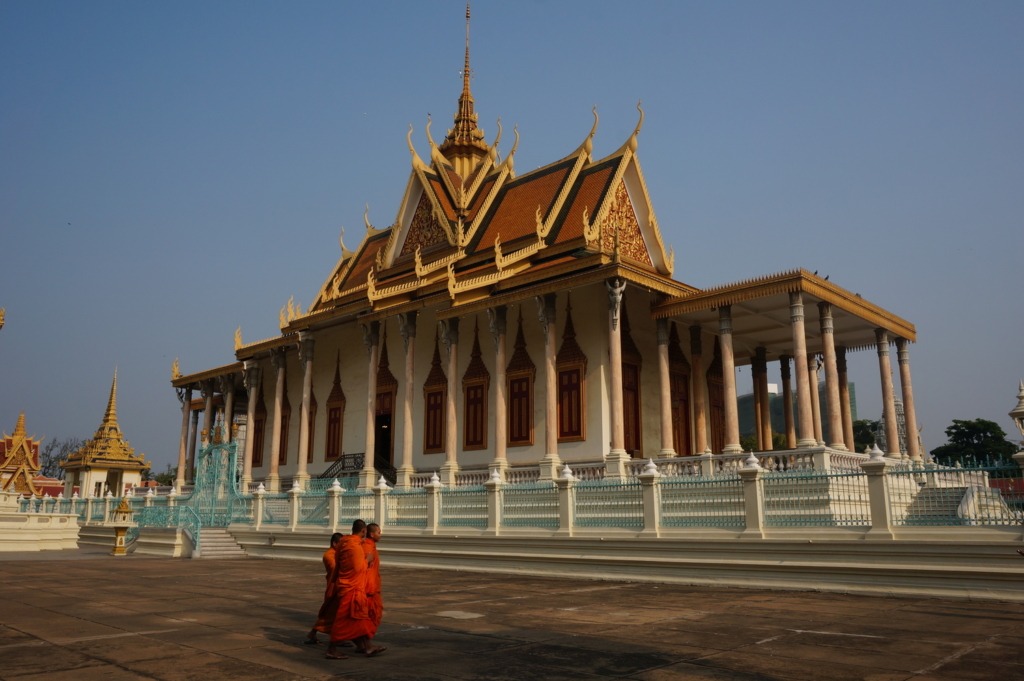 Honestly, we enjoyed wandering around the city less than I did in Ho Chi Minh city. There were less tiny streets and passages to explore, which made walking around less interesting; moreover, we suffered from the heat in the large streets. One advantage of Phnom Penh was that the sidewalks were sometimes walkable, sometime nearly impossible in any Vietnamese city.

However, there was one very interesting aspect of Phnom Penh to explore. There are many decaying buildings, either of Art Deco style or of New Khmer Architecture style. We used a very useful map provided by Khmer Architecture tours. They list many interesting buildings, and while I’m not especially crazy about art deco, the fact that most of these places were crumbling added to their visual interest. We saw movie theaters, villas, residential buildings… even the former US embassy ! 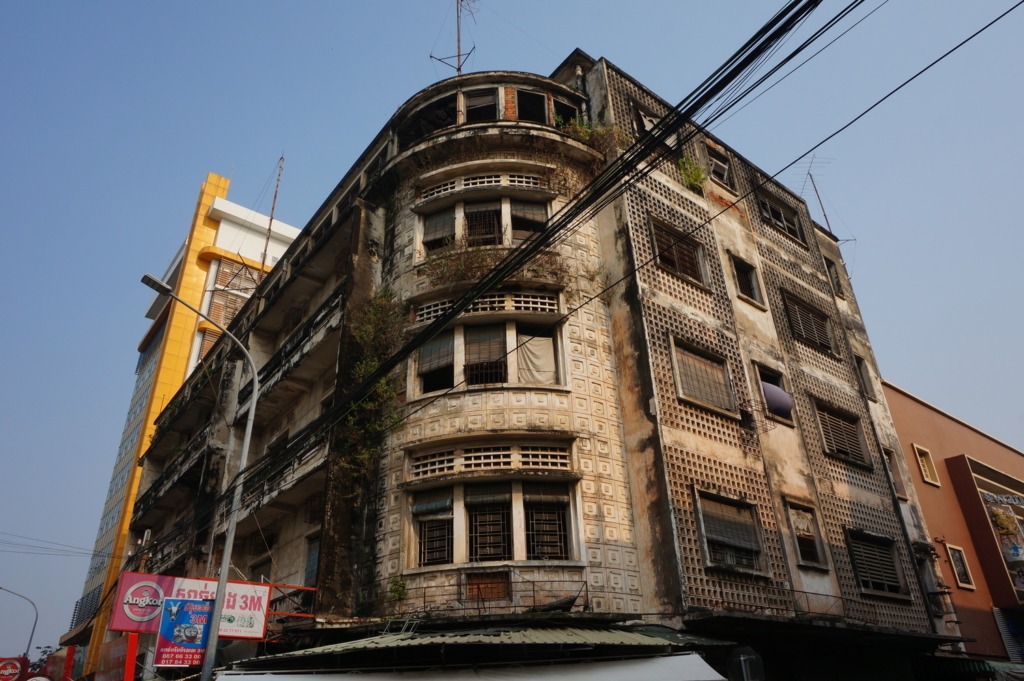 This former school was used during the Khmer rouge regime in order to interrogate suspects. People detained there were tortured until they confessed their supposed crimes, then were sent to be killed at Choeung Ek, another sinister place also known as the killing fields.

Visiting it was gut-wrenching experience. Hundred of pictures of the victims were displayed, along with testimonies from people whose family had disappeared during these tragic years.

On a much lighter (but slightly appalling) note, there was a shop attached to the museum; it obviously sold books and DVDs about the Khmer rouge, but among other bootleg DVDs we also found Johnny English, featuring Rowan Atkinson aka Mister Bean. I’m not 100% convinced this is the right place for it (sigh) 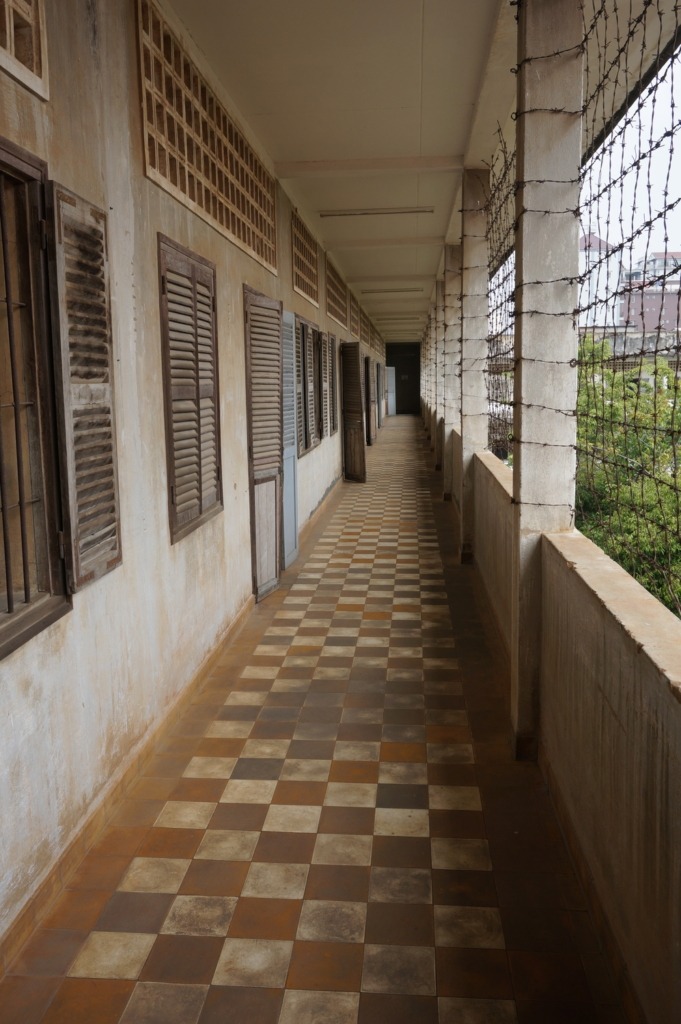 We went to the Russian market several times, as it was located close to our guesthouse. It was much less crowded than Vietnamese markets, and provided many opportunities for food or drinks.

The central market was located much further, but was well worth a look for its architecture (the itinerary provided by Khmer Architecture Tour started there). 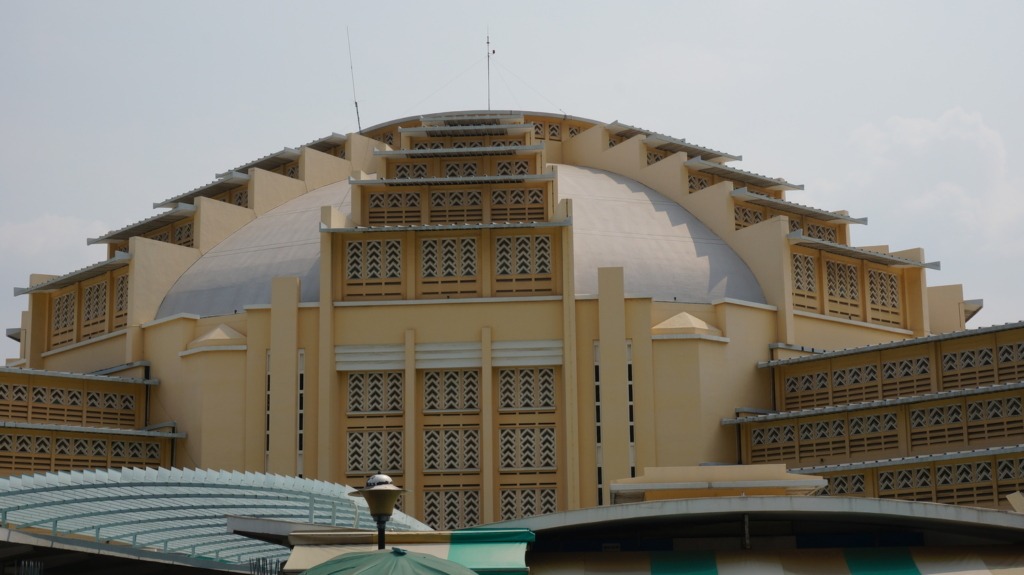 The ground floor of our guesthouse was absolutely unpleasant; it was used as a parking lot, while the reception desk was barely visible. However the staff was very welcoming and spoke good English. We had booked a triple room for $18 on Agoda, it was huge and absolutely clean (actually it seemed to be shiny new). The bathroom was also a pleasure to use; overall we were delighted to stay there. It was of course more expensive than our usual accommodations in Vietnam, but the quality was much higher.

Phnom Penh provides a huge amount of opportunity to fill your belly with excellent food. From street-food to high-end restaurants, there’s something for everyone. Of course, our budget mostly allowed us to eat on the street or market stalls; moreover, the crazy heat didn’t make us very hungry during the day, so usually only our dinners were taken in a ‘real’ restaurant.

This Indonesian restaurant was located very close to our guesthouse. The restaurant’s manager introduced the main dishes to us; he was a very friendly person, and it was a pleasure to discuss food with him. We chose three vegetarian dishes : eggplant balado, apur and green jackfruit curry.

The green jackfruit tasted a bit like artichoke; while I enjoyed eating it, I didn’t really appreciate the taste of the curry. However, the two other dishes were excellent. For $2.50 per dish, Sumatra cuisines is an excellent choice and we strongly recommend it !

This restaurant’s menu features several local dishes, as well as a rather large cocktails offering. Thanh had a fish amok, while I ordered a special. It was a dish made of mushrooms cooked inside a banana leave. Both tasted like light curries; they were excellent, and we totally enjoyed our dinner. Moreover, the staff was very nice and attentive; once more that was welcome change from Vietnam !

I’m usually very suspicious when I see the “fusion” label applied to a restaurant. However, most reviews of this place were ecstatic, and the menu featured mapo tofu, which is by itself a reason to give it a try. We shared three dishes : mapo tofu of course, but also vegetarian dumplings and a spring onion pancake served with aioli. All were excellent, and very reasonably priced (around $4 for each). My only critic would be the unforgivable lack of Sichuan pepper in the mapo tofu ! Several desserts were listed on the menu, but only two were available. We chose to share crumbed bananas served with dulce leche; while it was too sweet, we enjoyed it a lot !

We had breakfast at the Russian market twice; the first time we had excellent noodles, while the second time we bought different sweets. Paradoxically we found less sweets there than in Takeo’s tiny market; maybe we didn’t look hard enough ! One word of caution, though : while the food was great, it was extremely hot in the central food section of the market so eating there can be unpleasant.

For lunch, we ate on the street. The high heat incited us to eat something cold, so we had a cold noodles salad twice. It was similar to a bo bun; the nems were filled with taro. 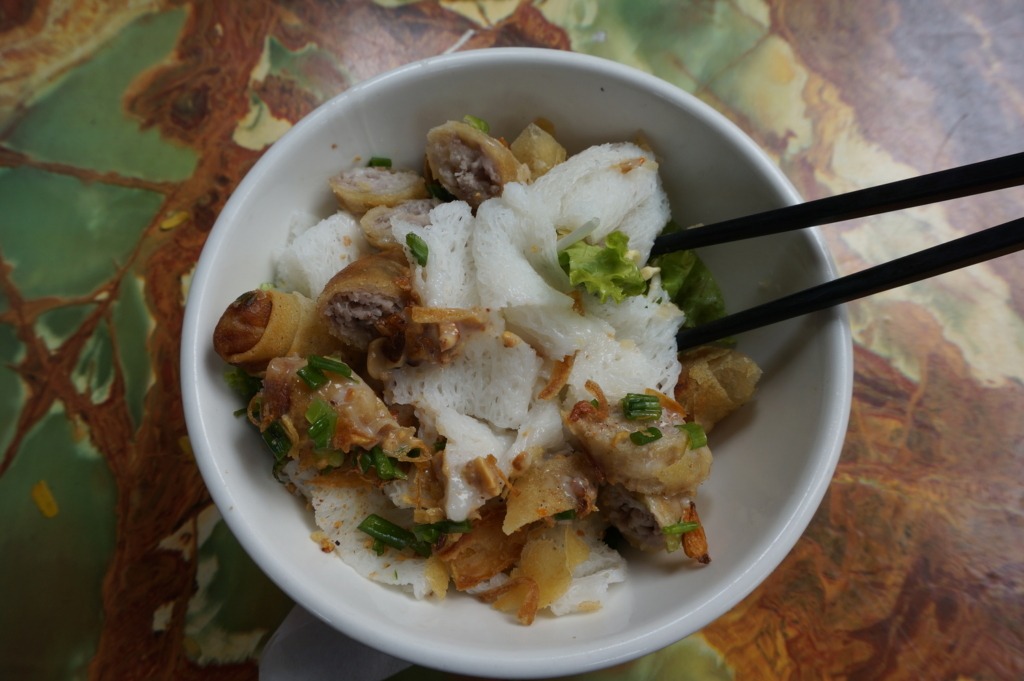 We quickly realized that the cafés would provide less choice than in Vietnam, at much higher prices 🙁 However, like for the food, the increased prices were in part explained by a rise in quality. Cafés in Phnom Penh were clean and quiet; the coffee was often great, made by an expresso machine instead of being a drip coffee…

The most expensive ice coffee I drank cost $3.50; it was excellent, but this price is what we usually paid for drinks for a whole day in Vietnam !

That’s the first café we visited in Phnom Penh. The first thing that struck us was once again the silence. What a difference with most Vietnamese cafés ! However, when we returned there a few days later, it was more crowded, mostly with teenagers doing their homework; it was noticeably more noisy than the previous time. They left in the late afternoon, and to our greatest pleasure the silence came back.

In spite of the great setting and good café, prices are rather low so this place is totally worth checking out !

Cyclo café, at the crossing between 155th and 470th Street, Phnom Penh

This very small café was located close to the royal palace. There was a rather large list of drinks, available in many sizes. We were welcomed by a French-speaking girl who was eager to practice this language. The coffee was tasty and extremely cheap, around $1; that’s a bargain, as it’s basically the same price as at a market.

That’s where I paid the outrageous $3.50 for an iced coffee. Honestly, it was nearly worth that crazy price : the setting was quiet and pleasant, the staff was very competent, and more importantly the café was very large and just excellent. If you want to have a small rest after visiting the central market, or after taking the Khmer architecture tour, I strongly recommend you to go there and try the Khmer coffee.

This place is actually a stall inside the Russian market. For $1.50, the coffee was excellent. It contained much less ice than in many other cafés; while the coffee wasn’t very strong, it has a lot of taste and I enjoyed it till the last drop !

Did I really list five cafés listed already ? No wonder we blew our budget again in Phnom Penh ! Anyway, the Euro café was a very pleasant place to work. It was shiny new and thus mostly empty. The chairs and couches were comfortable, the music’s volume low, and there was a very good wifi. Those looking for a beautiful setting will be deceived, though; while the furniture looked great, the walls were absolutely bare. Our drinks were good and cheap; we enjoyed a 30% discount due to the recent opening, but even without it, the prices would be okay.