Nha Trang is a large coastal city favored by Russian tourists. While we didn’t have many expectations about this place, we expected to see beautiful beaches around Doc Let, a small village located between Gia and Nha Trang.

Spoiler alert : I found both of these places to have no interest at all. Doc Let was totally ugly, and Nha Trang was absolutely boring. So, dear reader, I apologize in advance for the low quality of this post. Traveling there was such an appalling experience that I even have troubles being sarcastic about these places !

Spoiler alert, bis : the area we visited after Nha Trang was totally awesome and I can’t wait to share it with you ! So please, please, pretty please, don’t remove Endless Travel from your bookmarks yet 🙂

Cycling from Gia to Doc Let

We left Gia on the dreaded QL1. Fortunately the cycling conditions weren’t that bad : there was not much traffic and drivers were overall rather quiet. As there was not much to see, we rode quickly. After less than ten kilometers, we turned left on DT7 in order to follow the coast to Doc Let. The road became instantaneously quiet and empty !

As we were cycling on a small road, we came across two cyclists : one young Vietnamese lady and an older Westerner. We started chatting and it turned out that the man was a French guy, Godfather to the Vietnamese woman who lived in this area. He was in his eighties and seemed to be in a impressive physical shape, not looking his age at all ! It felt good to meet fellow cyclists, and we really enjoyed chatting with them.

After saying our goodbyes, our first goal was to find food. We headed towards what looked like Doc Let’s main road, and found a restaurant providing rice with tofu and vegetables. It was tasty and we felt much fuller than usual !

Our next task was to find a motel in order to leave our bicycle bags there, so we could cycle more easily. We came across the Light hotel, where we were enthusiastically greeted by the owners. For VND 250 000, the rooms were really basic. I once more wondered if it were possible to have at the same time a friendly staff and a great room ? Apparently in Vietnam they’re mutually incompatible.

Now that our bicycles were much lighter, we started searching for the beaches. The least we can say is that we were extremely deceived. From the Eastern part of the village, the beaches we could find were tiny and full of litter. We followed the DT652D headed South, and there the scenery became even worse. At one point, what was supposed to be a beach was again full of litter, with dead trees around and facing a factory. If this place reminds you of the Mordor in Lord of the rings, you’re not alone ![1]

The worst part about thus placee ? There was a Russian-looking couple wearing bathing suits, holding a selfie stick; they were probably trying to find out what was the best way to hide the awful surroundings. I wonder what the resulting pictures looked like on Facebook or Instagram !

We rode a few more kilometers on the same road, which was very narrow. Many trucks passed by, headed to the factory seen on the picture; they of course drove like mad and honked even more insanely. We passed torn-down buildings, uprooted trees… it was a totally desolate and depressing scenery. Like in Gia, it may have been caused by the typhoon… but I have a hard time imagining how one place could change from beautiful to being that ugly. And don’t even get me started on the cement plants… As we reached a crossing allowing us to go even further, we finally gave up and decided to go back to the motel in order to drown our sorrow in pina colada bottled water.

The next day’s ride took place nearly entirely on QL1. As Nha Trang is hugely popular, there was a lot of traffic. The scenery was totally uninteresting, and we cycled at record speed in order to reach Nha Trang quickly.

We had booked a guesthouse on Agoda. It took us a very long time to locate it, as it was located in a narrow alley. Once we arrived there, we had the unpleasant surprise to fond out that Agoda had once again messed up our booking. It took some time to get them to book another accommodation, and in the middle of the afternoon we could finally get our room !

The most striking thing about this city is the amount of Cyrillic writing. Many restaurants, shops and travel agencies on the Eastern side of town seem to primarily target Russian tourists, and to a lesser extent Chinese ones. 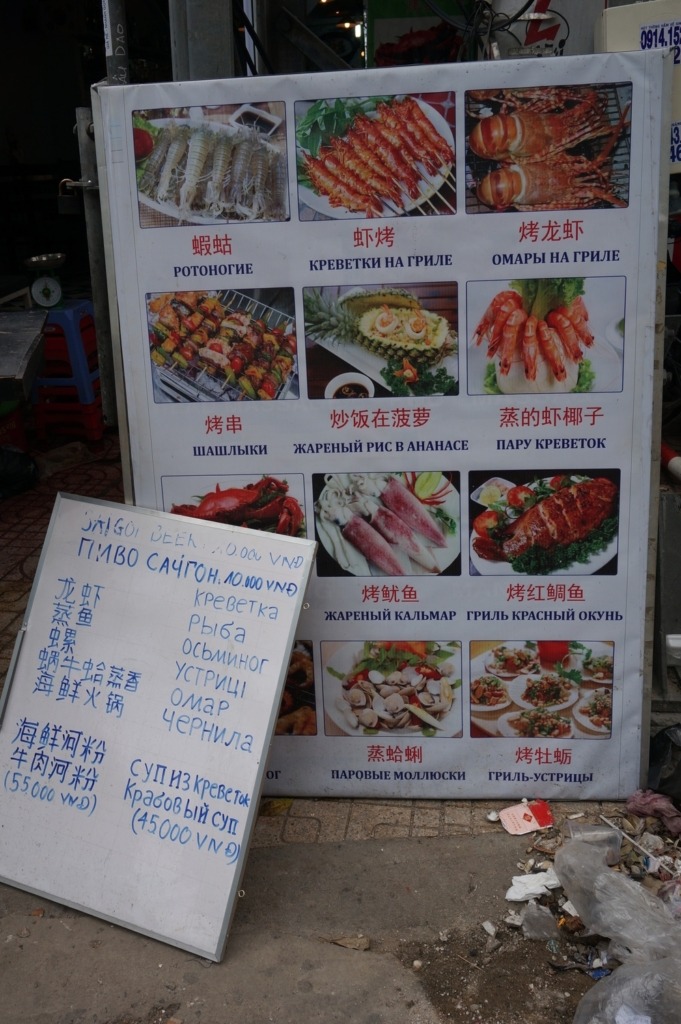 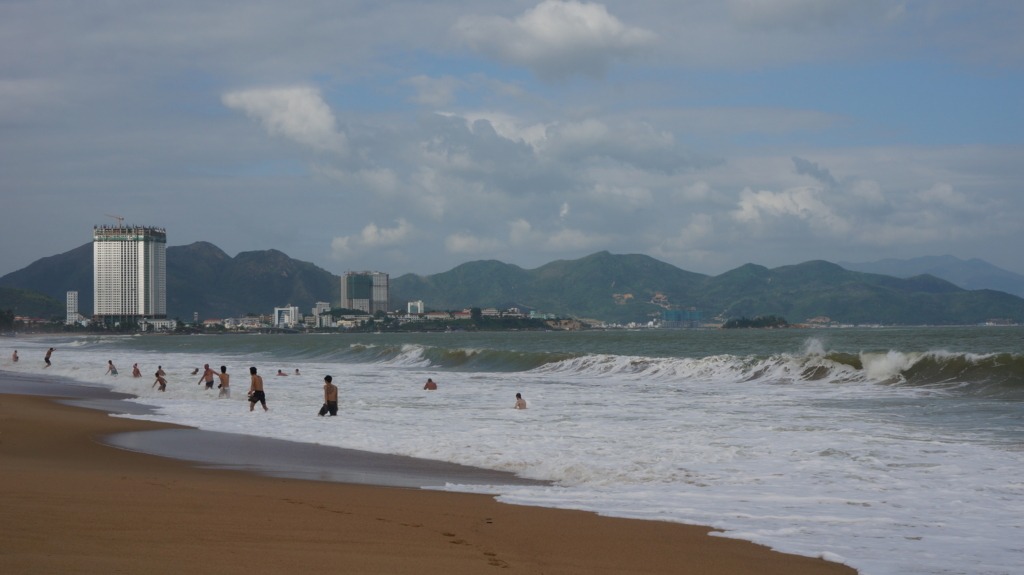 A bit further to the South, we tried to visit the house of the last emperor of Vietnam; unfortunately it’s currently closed, apparently due to nearby construction works. A few hundred meters later, we saw the cable cars going to Vinpearl, a large amusement park located on a nearby island. Would you trust a cable car over the sea in Vietnam ? I know I wouldn’t !

This Cham temple is located in the Northern part of the city, a few meters away from the QL1. I remember being rather impressed by this place when I was there several years ago. This time, although the site wasn’t too crowded, the visit was rather unpleasant. Moreover the restoration performed on the temple looked very crude. Overall I enjoyed our visit to Tam Ky’s Cham temples much more than this one. 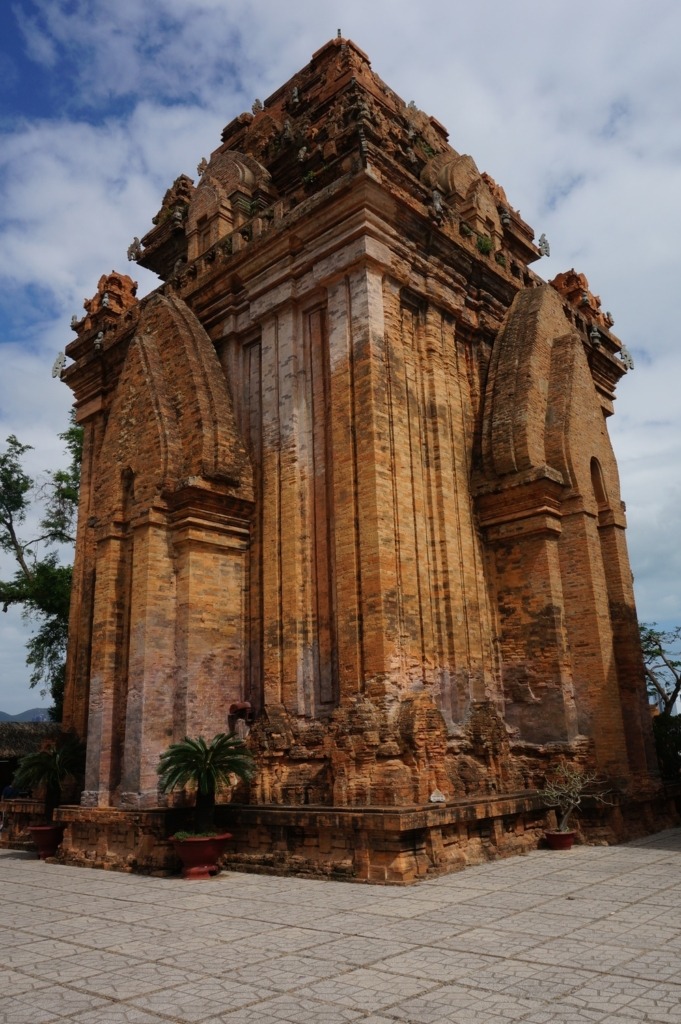 A slice of real Vietnam in Nha Trang

After visiting the temples, we headed to the Western part of town, which is much less touristy than the Eastern one. We came across a place performing cars and motorbikes cleaning, and asked them to clean up our bicycles. The service was excellent; no less than three employees spent a lot of time scrubbing nearly every inch of the bicycles. We paid VND 20 000 for each bicycle, and were totally satisfied with the service !

A bit further, we found a small street lined up with market stalls. One place sold bún bò Huế chay, and it turned out to be absolutely delicious ! For dessert, we had a chè at a nearby street stall. It was a very pleasant lunch, far from the touristic area !