Minority villages are one of the main attractions of the central highlands. While there are ethnic minorities throughout this area, it’s extremely convenient to visit them from Kon Tum.

Highland Eco Tours is widely praised for their tours, so we chose to take one of their treks. As we wanted to see some nature in addition to the villages, we chose their 3 days trek in Ja Rai and Bahnar villages.

After breakfast, we cycled to Highland Eco Tour’s office. We had previously agreed to leave our bicycles and bags inside their office. We became acquainted to our guide, who gave us some additional details about the trek. After a few more cups of tea, it was time to go.

We grabbed some lunch from a nearby street stall and started walking in small streets. Many vegetables were grown in this area, and we were surprised to see these wide vegetable gardens so close to the city.

Shortly after that, we reached a first Bahnar village, located close to the road leading to the Konklor bridge. Compared to the nearby streets of Kon Tum, it looked much more rural and much poorer ! We then followed the road for some time and had a coffee break in front of the Konklor bridge.

After crossing the bridge, we headed to a small Bahnar village located on the right side of the road. There was a rong house (communal house) of a respectable size standing in the middle of the village. They’re a typical sight of minority villages, and are typically used as meeting places by villagers.

The next part of the trek lead us through the hilly surroundings of Kon Tum. Our guide explained us what was planted there : cassava, coffee, rubber trees, and bananas. Almost every plant we saw had been planted by farmers, after cutting down whatever vegetation stood there previously. Honestly, it was a bit depressing, and hearing about the farmers’s living conditions didn’t help. Apparently, even after destroying entire forests for planting, they still have a hard time making ends meet !

While coming during the dry season made the trek easier, it obviously didn’t help with the landscape, as the rice fields were dry. There were a few pleasant sections, but overall the scenery was totally unimpressive.

After having lunch in a farmer’s rest hut, we resumed our trek and reached another remote minority village. There laid the first surprise of the day : there was a large church standing in front of the rong house. Apparently most minorities are extremely religious, and this fact was confirmed later in Kon Kotu, as you’ll shortly discover !

We entered the rong house and were impressed by its wooden structure. Apparently the villagers don’t use nails when building it; they only tie the bamboo poles together. We also learned that building is a common work : each family has to bring some of the required materials.

After some more walking on dirt roads, we finally reached the village of Kon Kotu, where we’d spend the two nights. The rong house at Kon Kotu is extremely impressive !

And just like at the previous village, there’s a large church very close to the rong house. At the end of the afternoon, it was extremely crowded; apparently all villagers attend to the mass. Another proof of the strong faith of the villagers was the incredible amount of Christmas cribs visible all around the village. In front of each house stood a nativity scene !

The homestay was a stilt house. It was large enough to host a large group, but we were the only guests that day. We were provided with a very thin mattress and many blankets, as the night would be cold and the wooden walls would provide nearly no thermal protection ! For dinner, we didn’t have local food; two girls who work for the agency cooked us Vietnamese food instead. While it was good, it couldn’t compare with the food from our Thai trek around Chiang Mai 2 years ago. Before 7pm, it was totally dark around us and the village was nearly totally quiet. There was no wifi and I had forgotten to bring my Kindle, so we wrapped ourselves in 3 blankets (in addition to our clothes !) and had a good rest.

We were awaken very early, probably before 5am, by the noise of many animals and human activity. It stopped nearly as suddenly as it had started after half an hour, and we felt asleep again until 7am.

After a quick cold shower and a forgettable breakfast, we started our full day of trekking. Overall it was a very deceiving day; the landscape was even more depressing than the previous day. From the top of the hill, no matter where we looked, we couldn’t see any trace of the original forests. Man-made plantings were everywhere ! 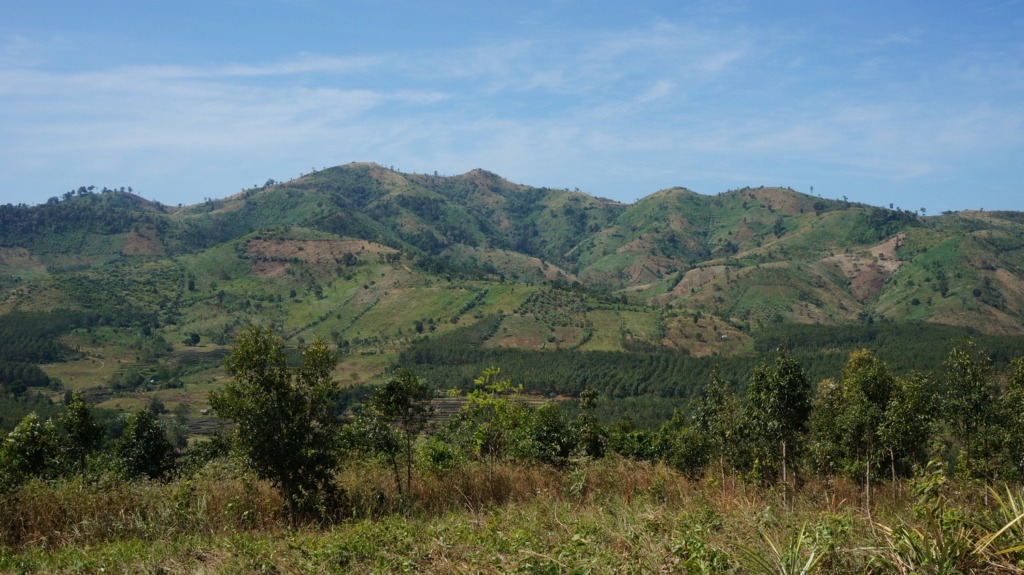 While we trekked on various surfaces, from dirt tracks to a river bed, we didn’t really enjoy ourselves. The only positive aspect that day was the professionalism of our guide, and his impressive knowledge of this area.

Paradoxically there’s one kind of tree that never gets cut by villagers. One of them grew much larger than the nearby house, making for an impressive sight. 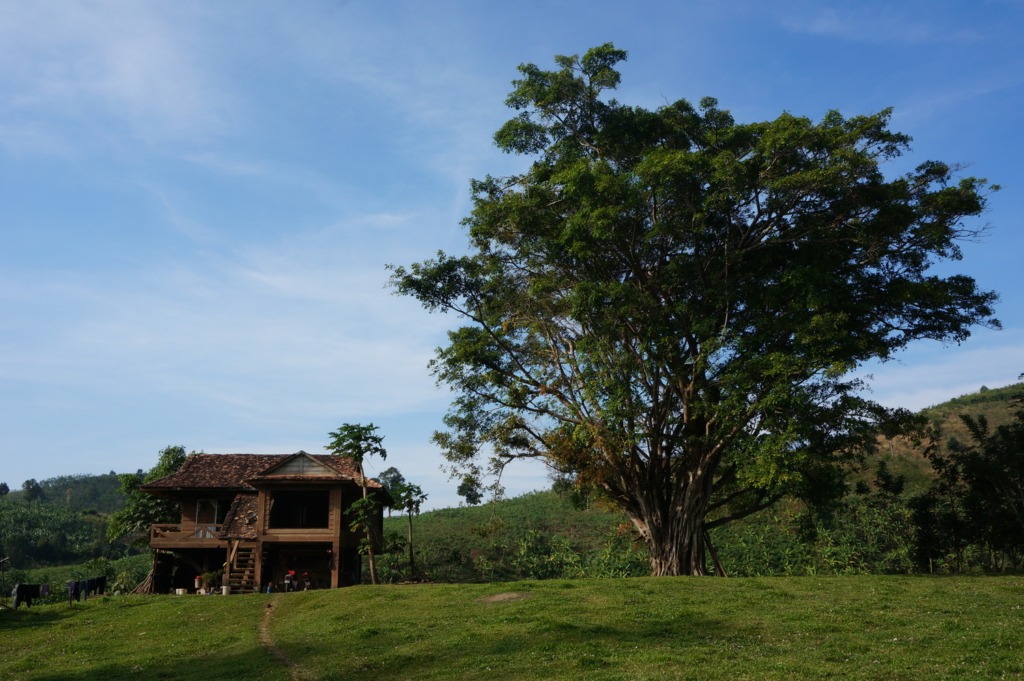 After another cold night, our guide came by motorbike with another rider. They led us back to Kon Tum, riding on a very bumpy road. While it’s possible to rent a motorbike and ride to Kon Kotu by yourself, I’d only advise it to experienced riders ! In Kon Tum we had noodles soup for lunch, followed by a good coffee.

The program for the day was to visit several minority villages of different ethnics in kon Tum’s surroundings. Our first stop was supposed to be a small village South of Kon Tum, but it was very though to access it and our drivers gave up.

We then rode to a nearby Jarai village. While the village also hosted a rong house, its roof was made of metal and was thus much less beautiful that traditional ones. However the visit of the village was very interesting, thanks to the explanations from our guide. Jarai minority seems to be very different from the Bahnar. They apparently have many festivals involving animal sacrifices, from chicken to buffaloes. They also have very peculiar funeral rites; we visited the cemetery and learned about them. After someone dies, the family comes daily in order to clean up the tomb and bring offerings. Food and alcohol are common, but we also spotted a bicycle which was supposed to help the soul of the deceased one move around ! After a period which may last from months to a year, there’s an abandonment ceremony, which actually lasts three days. As its name implies, after this ceremony, the tomb is not cared for anymore. As a result, some of the tombs we saw in the cemetery were crumbling.

After having lunch at a vegetarian restaurant in Kon Tum, we visited two more Bahnar minority villages. One was surprisingly close to Kon Tum and offered a sharp contrast from the surrounding city ! Both featured many stilt houses, whose walls were usually made of wood but also sometimes of waddle and daub ! Just like in the first village we visited on the first day, the inhabitants’ poverty was striking. 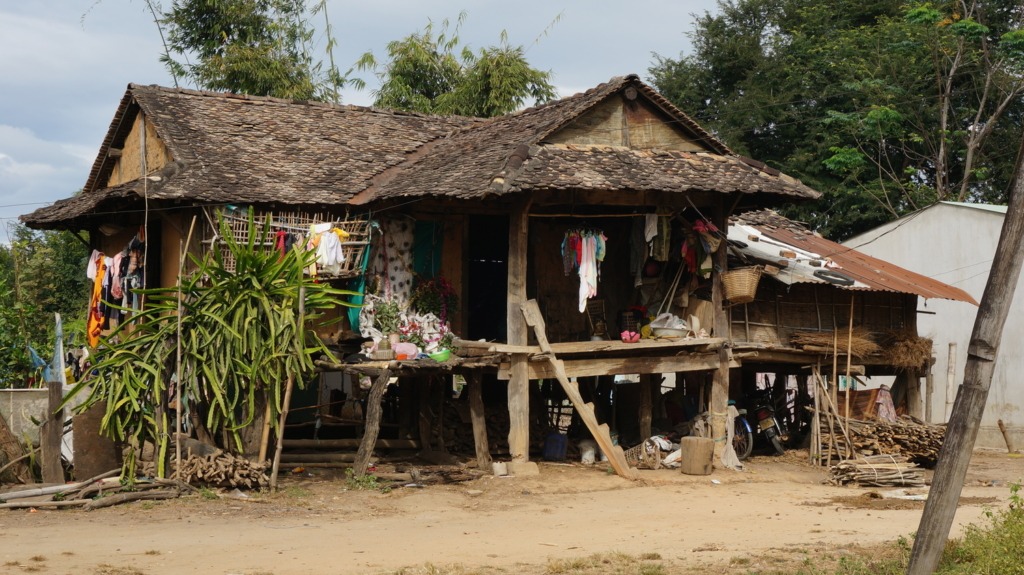 In front of nearly each of them stood a Christmas crib, like at Kon Kotu. While most were rather crude, we came across this beautiful nativity scene. 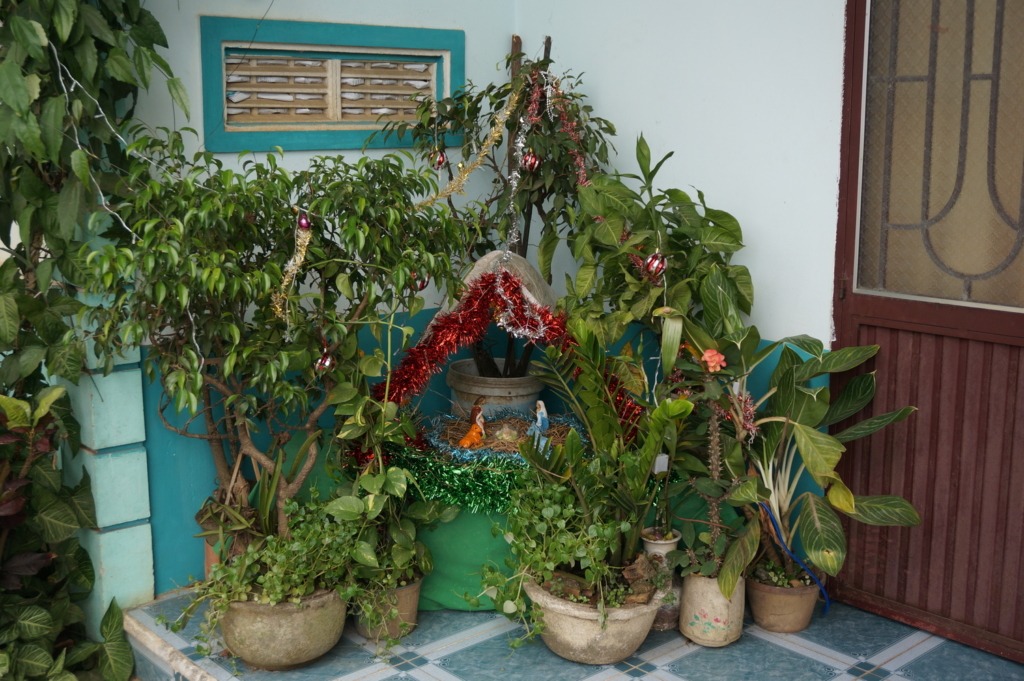 Under the floor of several stilt houses, we had the surprise to see wooden coffins ! Apparently they’re expensive, as trunks large enough to make coffins are rare. As a result, people prefer to buy it before they die, in order not to let their relatives pay for it.

We have mixed feelings about our trek. The most negative aspect was the second day of trekking, due to the lack of worthwhile scenery. On the other hand, Kon Kotu’s rong house is a must-see, and the third day was extremely interesting. Our guide clearly knew a lot about these minorities and was eager to share his knowledge !

As a result, although traveling by motorbike really isn’t our favorite was to discover places, we would advise you to skip the trek and focus on the minority villages. Highland Eco Tours offers several 2-days tours like this one combining Kon Kotu and other nearby villages. You’ll save some money in order to trek in more beautiful areas and the cultural aspects of minority villages will delight you !