Aafter leaving Phnom Penh, Kep was our next touristic stop in Cambodia. We took our sweet time to go there; it took us 3 days to cycle to Kep. This destination is often depicted as a nice day trip from Kampot, our next destination; our plans were to spend two nights there, in order to discover the city and in particular its abandoned mansions.

Cycling from Phom Penh to Takeo

First we headed back to Takeo. From Takeo to Phom Penh, we hadn’t enjoyed Highway 2, so this time we cycled on Highway 3, in spite of many people stating that it’s crowded and unpleasant. While there was indeed slighty more traffic, we could ride on the shoulder lane so we weren’t bothered much. Moreover, the road surface was much less bumpy than on Highway 2. Overall we would advise to cycle Highway 3 rather than the alternative !

Lunch on that day was probably the most unpleasant of our whole cycling trip to date. We still don’t have much clue what it was; there was some hard tomato, a few chicken slices, and several other unrecognizable ingredients. We were only 50km away from Phnom Penh and missed its food terribly already !

We left the highway for a bit more than 10 kilometers at the end of the day; while the road was very bumpy, forcing us to ride on the sandy road shoulder, it was pleasant to be on a smaller road !

We found a room at Daunkeo guesthouse; for $8, we got a large twin room with fan. Compared to Mittapheap where we paid the same price, it was night and day : the room was spacious and well lit, the bathroom very bright… We also enjoyed a basic dinner in the attached restaurant.

Cycling from Takeo to Chhuk

This was not the most direct route to Kep, but we wanted avoid the highways as much as possible, so we decided to give small roads a try.

We bought next day’s breakfast at the market, like the previous time, and enjoyed it just as much. I then took the time to clean and grease the chains on our bicycles, and we were ready to go once again.

We had to return to Highway 3 first; after cycling only a few kilometers, we came across the nice-looking Green coffee & Restaurant. The staff was incredibly welcoming, helping us to pull the bicycles to a shadowed place. As it was already late in the morning, and after the previous day’s horrific lunch, we decided to have both a drink and lunch there.

Once we had enough strength to resume cycling, we took road #31 to Angkor Chey, and kept cycling on this road until we found the smaller road #1331. This road was actually a dirt track, and after a few minutes, both our clothes and bicycles were totally covered with red dirt ! On a positive side, the surface was rather flat so it wasn’t an unpleasant ride; moreover, the scenery was actually great ! 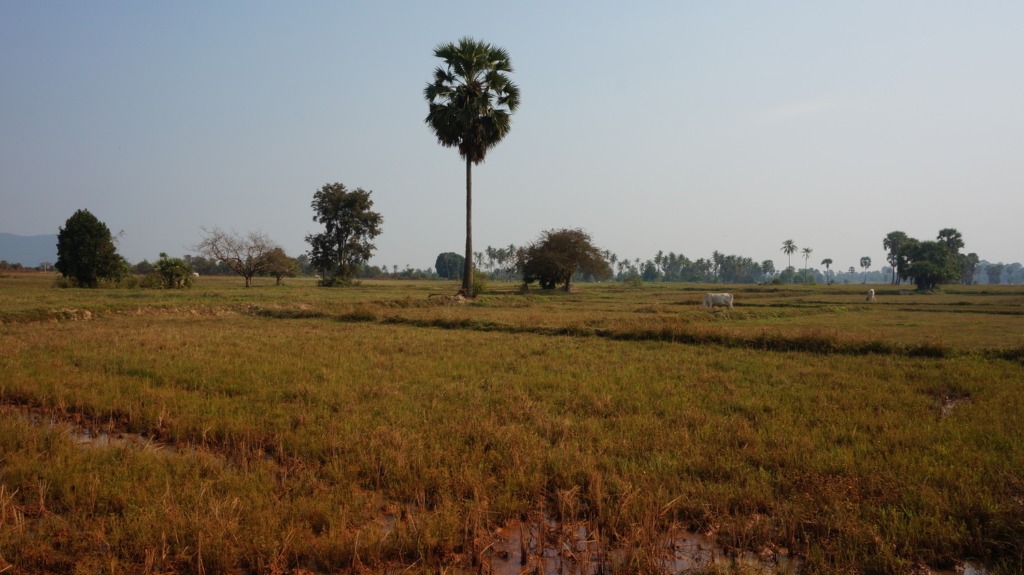 Our guesthouse in Chhuk (how the hell do you pronounce this ?) was great. For $12 it had air-con, and a great bathroom. There was even a water boiler, although we had to move to desk in order to use it, due to the poorly placed power plugs and small boiler’s electric cable !

Cycling from Chhuk to Kep

We first went to Chhuk market to buy breakfast. It was crowded, noisy and messy; we really missed Takeo’s market ! However we managed to get some sweets, which we ate in a nearby café. Surprisingly, all the costumers in the café were children, something we noticed again several times.

The first part of our cycling itinerary was the road 135 to Kampong Trach, for around 30 kilometers; while the first half of this stretch was sealed, the second half was a dirt road, similar to the previous day. Overall, the scenery was less beautiful than the previous day, but cycling there was still very enjoyable ! 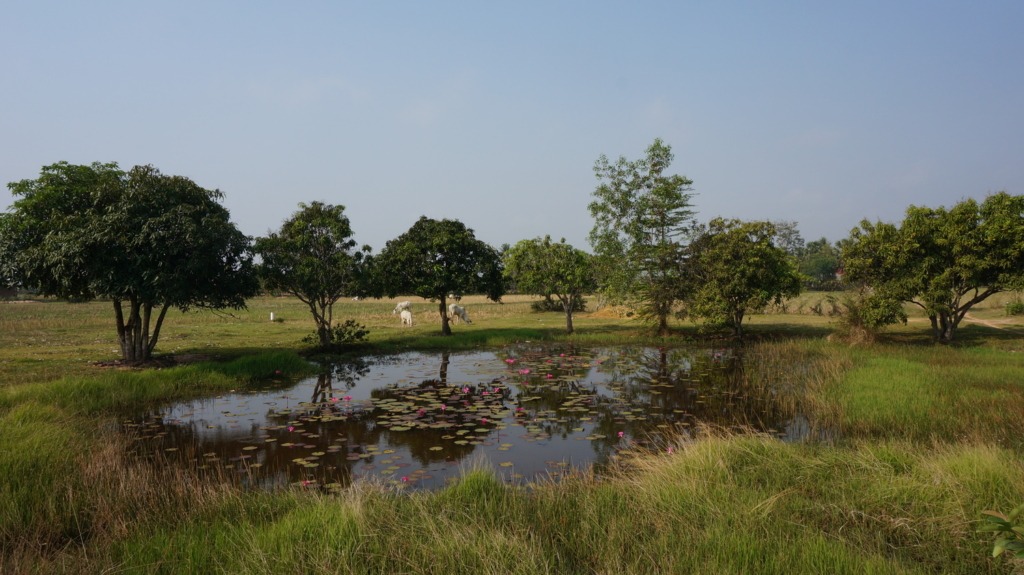 The next part of the itinerary was road 33 to Kep, which was much more standard. We found a nice guesthouse and restaurant a few kilometers before Kep, and had a basic but great lunch there.

As a side note, most Kampot pepper farms are actually located closer to Kep than to Kampot, a few kilometers either North or North-East of Kep.

We reached Kep at the beginning of the afternoon, and our quest for a guesthouse started !

The day before, out of curiosity, I had a look at Agoda in order to check the available accommodations. And to my great horror, basically nothing was available anymore ! We could choose between a military hammock for $4, or a room in a very high-end hotel for $450. Oh crap.

Indeed, while I had checked the date for the Khmer new year in order to avoid it, I didn’t realize that Cambodia also celebrated the Chinese new year. As a result, virtually every accommodation was booked well ahead of time.

Our first goal in Kep was to find a local guesthouse (which was less likely to be booked online, as most don’t appear at Booking or Agoda). The first one we visited still had rooms, however the price was greatly inflated : $15 for a double room with fan, when the price usual price should be around $8. We decided to stay there, as the room was clean.

A large number of crumbling villas are found in Kep. They were built when Kep was a flourishing seaside destination for wealthy French people, and abandoned when Pol Pot rose to power. During the Khmer rouge regime, they were pillaged, and now most of them have either crumbled down due to the lack of maintenance, or are more or less officially inhabited by squatters. 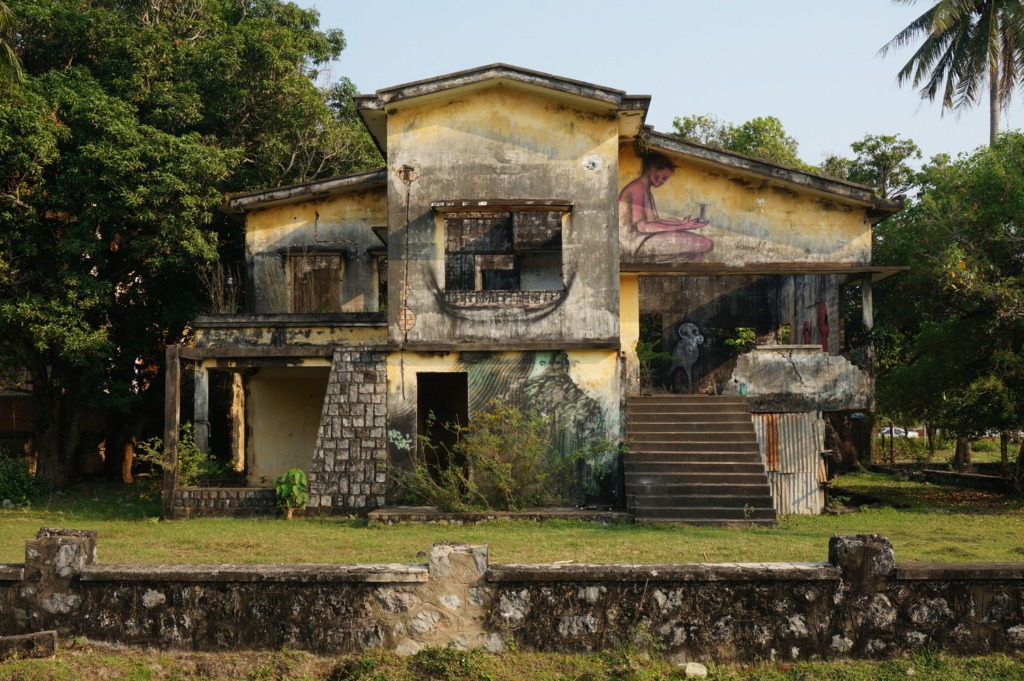 These wide, empty tracts of land gave most of Kep the appearance of a ghost town. It’s hard to describe that feeling; while a few parts of the city were absolutely crowded during the day (see below), most of it was totally empty, save for a few restaurants.

While I usually enjoy the ambiance of decaying places, in Kep something didn’t feel right to me. The city was too large and too empty to feel comfortable there.

Another unpleasant aspect of Kep was the restaurants and cafés. The two placed we visited were held by French people, and the only costumers were French tourists (or maybe French expats and retired people) who basically made me ashamed to be French. They were loud, crude, and basically Thanh and I just wanted to punch them so that they would shut up. Remember how much I hated the way most Vietnamese people behaved ? Well, French people in Kep were basically just as bad.

Many people come to Kep to enjoy the local specialty : Kep’s crab served with Kampot pepper. However it seems like the crab is over-fished, and the corals are getting damaged as a result. Moreover, as a vegetarian I’m not really attracted by dead animals. We went to the crab market anyway to have a look, and managed to enjoy it even less than the other markets. It was crowded and extremely hot, and the prices of drinks and food were very high. 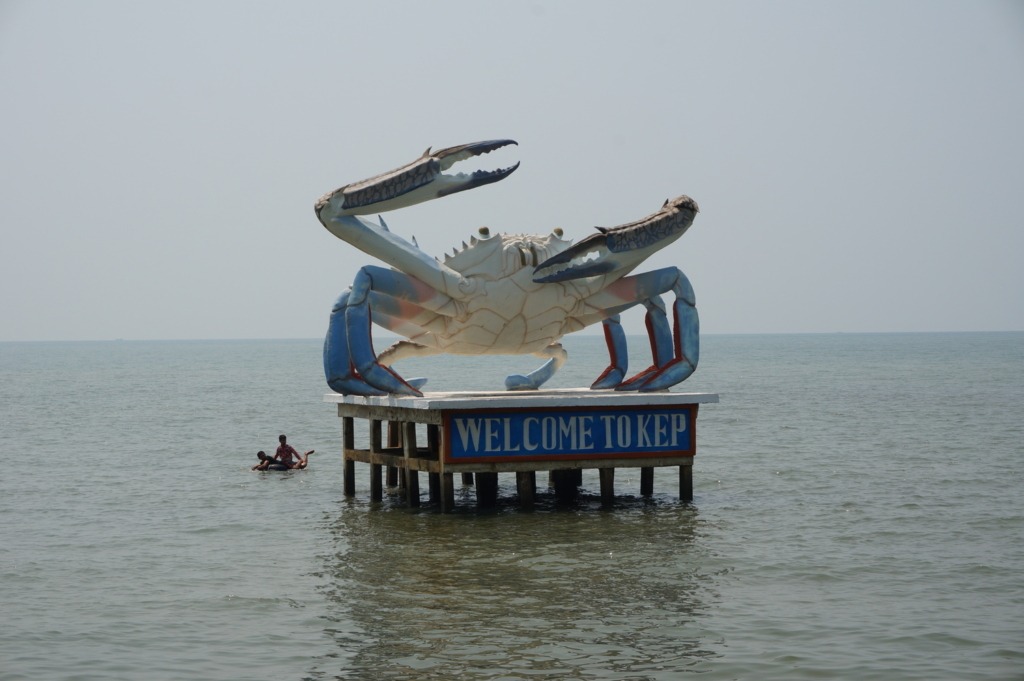 As we left the market and picked our bicycles in the parking, I noticed that my chain was off. As I have a Rohloff hub, this is very hard to achieve, so something fishy was definitively going on. Under a burning sun, it took me a while to put it back, and I definitively hated this place.

Kep’s beach seems extremely popular with Cambodian people. Many people were enjoying the sea (while being fully clothed), and even more chose to spend their time in little bungalows. The South-West corner of the city was extremely crowded, compared to the other parts of the city which really looked dead !

Overall we really didn’t enjoy ourselves in Kep. While being there during the Chinese new year certainly didn’t help, the very peculiar ambiance didn’t feel right to us.