Hoi An is the first stop of our cycling tour in Vietnam. I’ve already been there before, and always left the city having mixed feelings. Indeed, while I love the decrepit houses of the old town, I always considered that the crowd and the quantity of shops in this area ruined the atmosphere. Will it be better this time ?

Riding from Da Nang to Hoi An

Our 30 km ride from Da Nang was uneventful. It was raining slightly, but not enough to make the ride unpleasant. In order to avoid the dreaded QL1, we chose to ride the AH17.

During the first 20 kilometers I had the feeling that we hadn’t left Da Nang. The road surface was great, and surrounded by recent houses. Then suddenly there was some improvement work underway; our bicycles and ourselves quickly ended up covered with mud. The road also became narrower, and while there were still many houses along the road, they were the kind of old, decrepit kind that I love seeing but where I would probably hate living 🙂 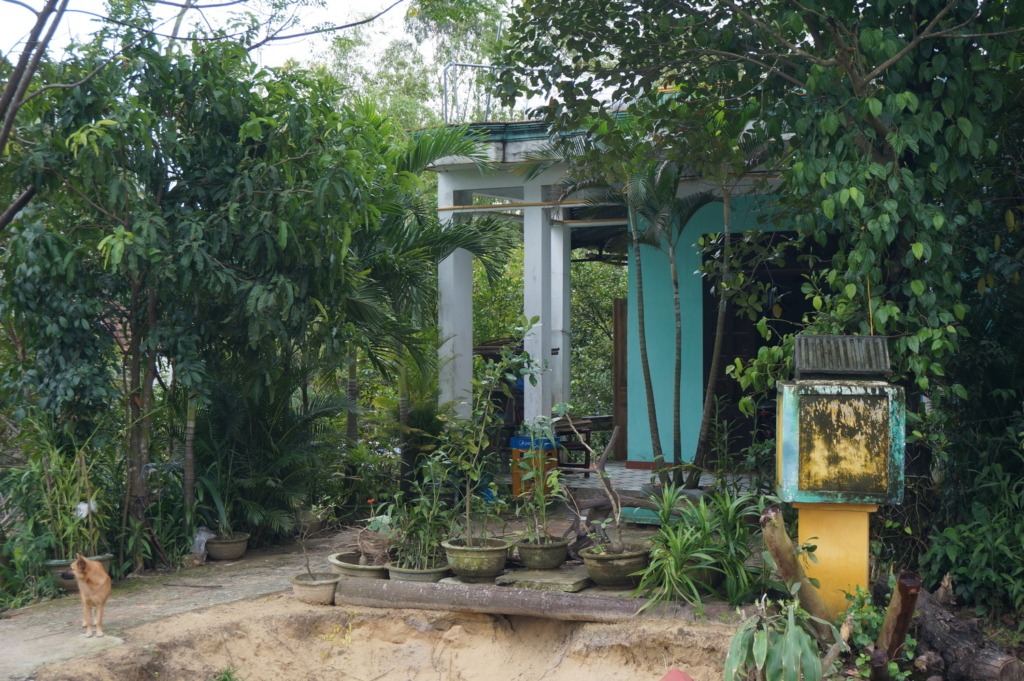 Once in Hoi An, finding our guesthouse was easy. We stayed at Viet house (313 Cua Dai); be wary that there’s another guesthouse by that name in Hoi An. We paid a rather cheap price for 2 nights : 377 000D (less that 14€) for a double room with breakfast included and air-conditionner. Regular price is probably higher : we initially booked at another accommodation (Sunny Hoi An) which finally couldn’t honor the booking, so Agoda offered us a choice between 2 other places at no additional cost.

The room was located on the ground floor. It was spacious with a lot of incoming light. The only disappointment was the shower, which was a bit of a mess, leaking water in all directions.

The guesthouse is located around 2 kilometers from the old town.

An afternoon in Cam Nam island

We decided to spend our first afternoon in Hoi An visiting Cam Nam.

This small island is seldom visited by tourists. It is linked to the city by a small bridge close to the old town.

Once we got past the SPAs and hotels on the border of Cam Nam, you’ll find a few restaurants along the river. Food was good and cheap, so if you’re hungry don’t hesitate to stop there ! Note that on the left side of the picture, you can see the level the river recently reached after the floods. Scary ! 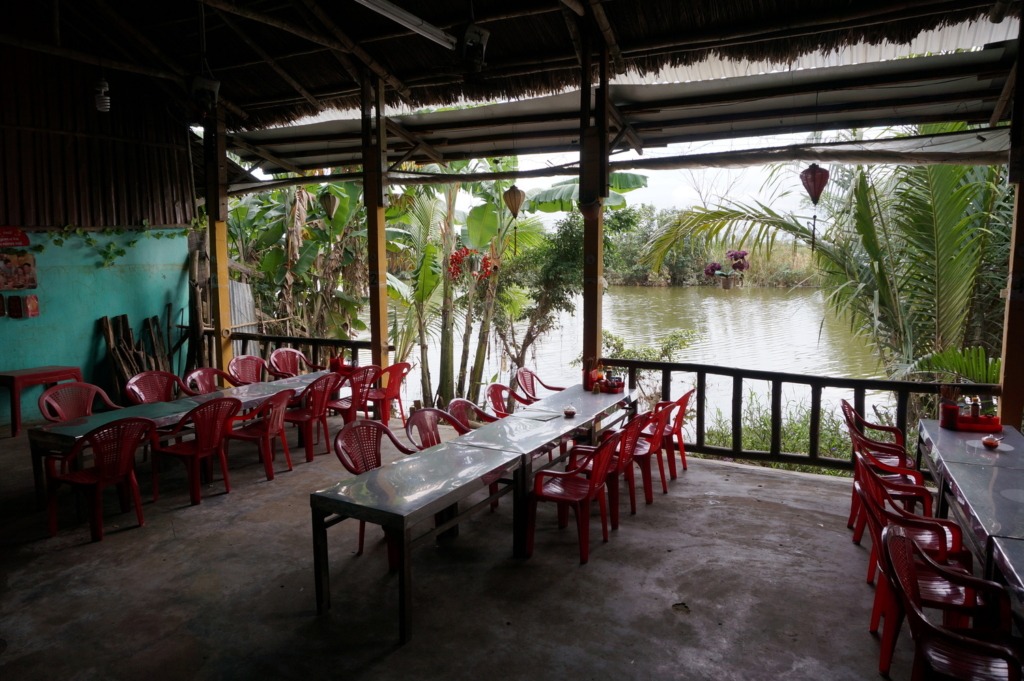 We tasted cao lau, a specialty from Hoi An made from noodles, fried lard, vegetable and sauce. As a vegetarian I got fried tofu instead of pork. For dessert, we had a chè bắp which is a sweet corn pudding. It can be either cold or warm; I expected to prefer the cold version but to my surprise ended up preferring the warm one.

As a side note, we went to another nearby restaurant a few days later and quality was great too.

After lunch, we kept on walking along the main road, sometimes taking small roads or alleyways


I was impressed by how many of temples we saw in Cam Nam. Most are either new or very well preserved, especially compared to nearby houses.

Boats on the river

Some of the small streets lead us back to the river where boats were anchored.

As I mentioned the main interest of Cam Nam is the local life, so don’t expect breathtaking sights ! However you’ll spot picturesque houses and a few colorful plants.

Listen, I have two news for you. The good one is it’s actually possible to enjoy Hoi An’s old town without the crowd, and wander around the decrepit houses without seeing them messed up by shops. The bad one ? If you’re like me, it’s going to be a painful experience, at least the start of it.

So be strong and set up you alarm clock for something 5:30PM. I first thought it was a bad joke and that the existence of hours before 9PM was just a made-up story to frighten children, but it seems like it’s real. FEAR ! 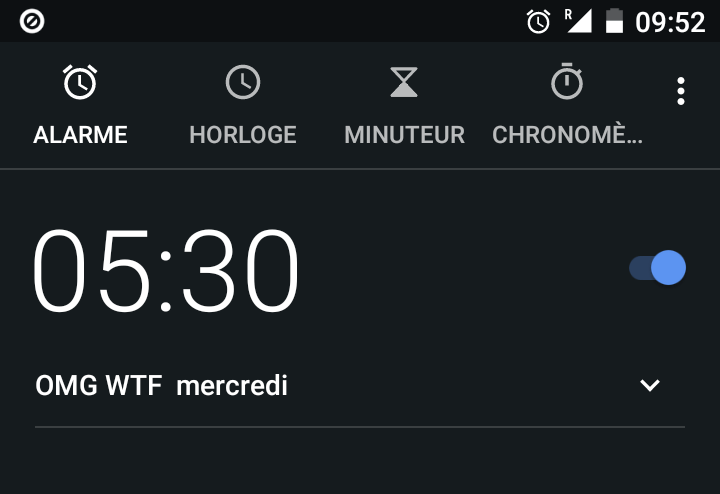 I probably ended up in the streets of the old city looking like a Walking dead extra. But the sights there were just glorious in my opinion ! Gone were the crowd, the ugly shops… There was just us, a few motorbikes (well, that’s Vietnam, after all), and occasional rain drops. In spite of the light rain, it was not too hard to take pictures as we could usually shelter ourselves under the roof of a house while shooting the picture.

At first I felt like stopping in front of each house to take a picture. The canary yellow color on these old walls just drove me crazy ! And with the stores being closed, they look stunning in my opinion.

This lovely bridge linked the Chinese and Japanese areas of the city. You’ll need to buy a ticket in order to cross it, unless you arrive early like we did.

Although in all fairness not as impressive as by night, lanterns by day still deserve your attention and a small slice of your SD card !

By the way I realize that the GAM (Gemstones art gallery) actually appears twice on the picture but I just couldn’t choose between Thanh’s picture and mine !

While the main streets of the old town obviously offer beautiful sights, it would be a pity to miss the narrow alleyways linking them.

Take a break in a local coffee shop

After we spent a lot of time walking around the old town, the streets became more and more busy and the shops started to open. We headed to a nice local coffee shop we had sighted earlier, a few meters away from the Japanese bridge. It was great to taste a ice coffee there !

What everyone sees : lanterns by night

I usually don’t take pictures at night because without a tripod, they end up being blurry. However I was surprised by the neat definition of the lanterns pictures at night. I only shot a few in order to test the results, so I will post better pictures next time we go there !