Diep Son sandbar is supposed to be a highlight of Gia’s surroundings, where we arrived by the SE21 train. At low tide, this sand bar is over the water, allowing visitors to walk between Diep Son island and the neighboring island.

After arriving rather late at Gia, we checked in at a motel recommended by locals (Trung Kien, 132 Nguyen Trai). Our room on 2nd floor was large and very clean, with a nice bathroom, air-con, mini-fridge and a balcony. For 200 000VND (around €7.50), it was a bargain and we were totally satisfied with it… at least for the first night, as you’ll read later !

In spite of the late hour, it was easy to find several places to eat. We settled for a small place offering mi cay (spicy noodles) where Thanh indulged in some junk-food : fried cheese sticks, and grilled bread with mayo. Gia was surprisingly lively; plenty of people – especially young ones – were drinking tra sua (tea with milk) while other were riding their motorbikes around. We then had a great smoothie at a nearby stall, and enjoyed being there, sitting in our little plastic stools. Overall it was a very pleasant evening, and it felt good to be in a warm weather again !

The quest for the speedboat to Diep Son

The next day, after breakfast, we tried to find the place to board the boats to Diep Son. As we walked along the road bordering the sea, we saw that all houses lining the road were destroyed. We don’t know if it’s due to the  recent typhoon and / or to some development plan.

We quickly reached the small harbor, but didn’t see any place that seemed to sell tickets. Vietnam Coracle’s article about Diep Son was unfortunately not very helpful, as things seemed to have changed since it was written. But suddenly, we realized our mistake : we were behaving as if Vietnam were a real touristic place, with some organization in place and professional behavior.

We immediately corrected out mistake by switching to our patented 4-points checklist :

With a score of 4 out of 4 items, it looked like the following place could actually sell tickets to Diep Son. 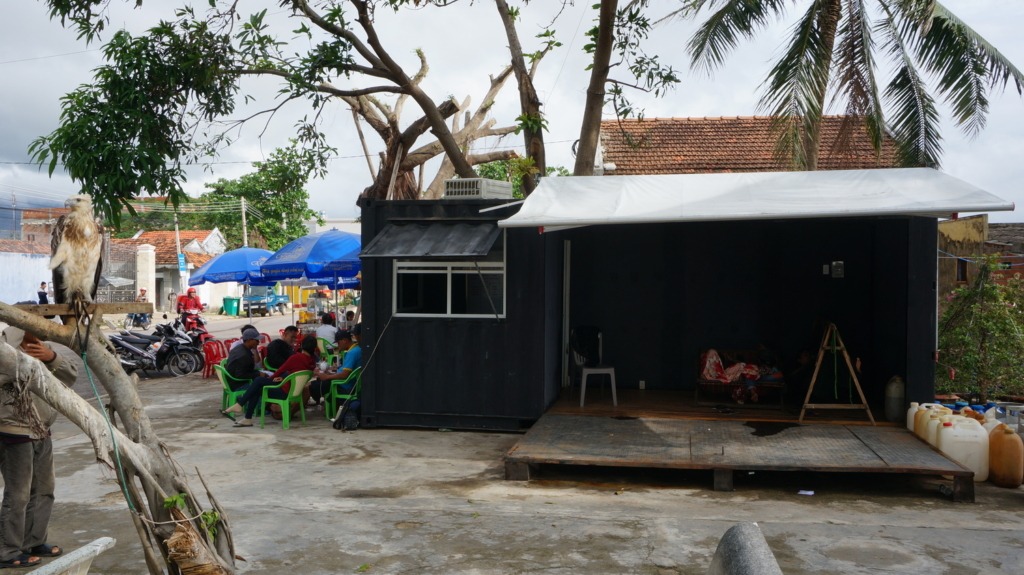 Note that unlike what the picture may seem to imply, the presence of an eagle tied to a dead tree is not mandatory.

Thanh went to ask the cards players for confirmation, and once again our 4-points check proved to be perfectly right. After some more waiting, one of the card players (probably the loser) went inside the booth and grudgingly accepted our money. The roundtrip tickets cost 200 000VND per person. More waiting followed, and Thanh resorted to asking one of the life forms in the hammocks when the boat would leave. In a truly striking display of Vietnamese professionalism, the answer was “later”.

Finally, two minivans arrived (probably from Nha Trang) and several tourists disembarked. This seemed to suddenly awake one of the sleeping worms, who turned out to be the speedboad driver. We quickly boarded one of the nearby boats. Their capacity was 20 people and there were at least that many people inside. Life jackets were provided, which is a huge plus due to Vietnam’s maritime safety record.

We had to share the space with several bags of vegetables, brought by the tour guide leading the group. He explained that there was a restaurant on the island but it had very limited choice. However, he very generously offered us to join the group for lunch, for the small sum of 140 000 VND (around €5) per person. We accepted the deal, wondering how much caviar and champagne we’d get for this amount usually sufficient to feed us both during a whole day.

The speedboat was, as its name implies, quick. We already knew that Vietnamese motorbike riders have only two ways to ride : either they’re going slower than an elderly walking with a cane, or at full speed. There’s nothing between these two modes; I actually suspect that there’s no gas pedal on their motorbikes, just a switch with 2 positions “min” and “max”. Well, it turned out that the pilot worked the same way. We cruised at very high-speed for 15 rather uncomfortable minutes, then reached the pontoon of Diep Son. 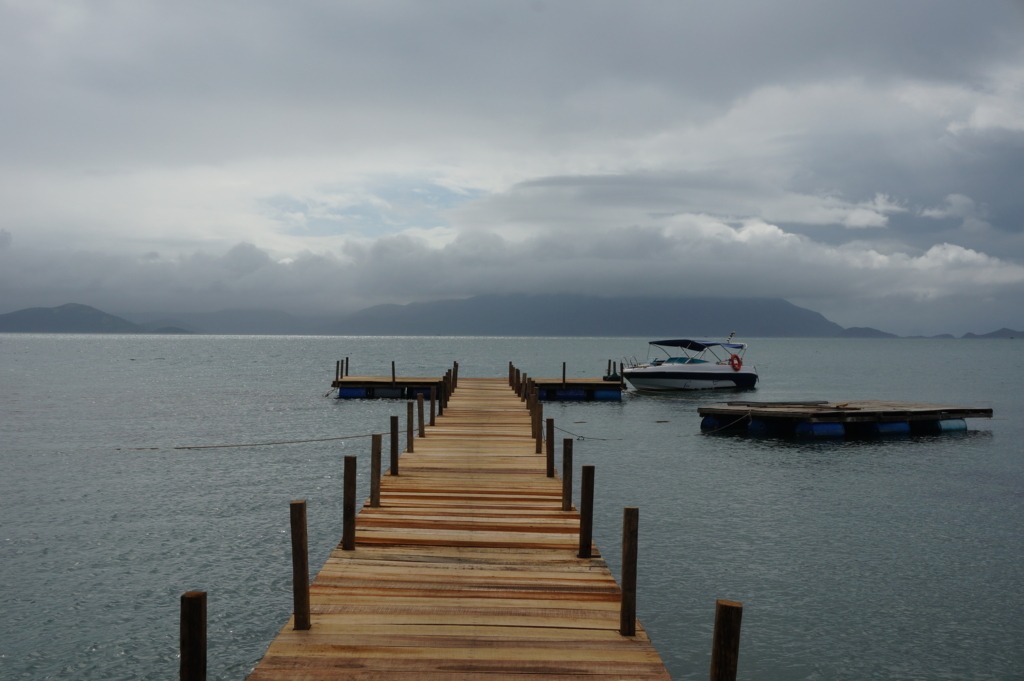 The pontoon leads to the restaurant; the sandbar itself is located on the left side, while the village is on the opposite side of the island. As we didn’t want to cross the sandbar surrounded by other people, we headed to the village first. One thing I really love in Vietnam (apart from Banh Mi and ice coffee) is the blue boats. I thing they’re really beautiful; we already saw many in Tam Hai and Diep Son offered me the opportunity to see more of them. 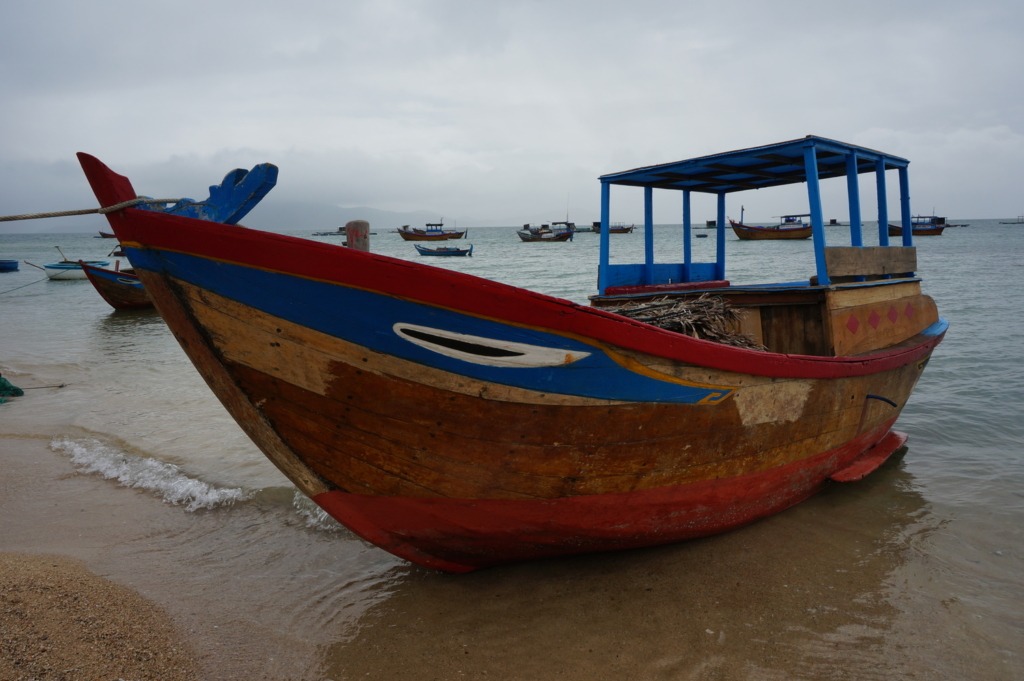 The village seems to have been hit very hard by the typhoon. Several houses were destroyed, while many other were under repair.

We then headed back to the pontoon in order to cross the sandbar. The tide wasn’t at its lowest level, so we actually had water up to our knees. One dog started following us, but apparently we were too slow to his liking and he reached the next island much faster than us 🙂

The distance was rather short, as you can see on the next picture, but walking in water took a long time. 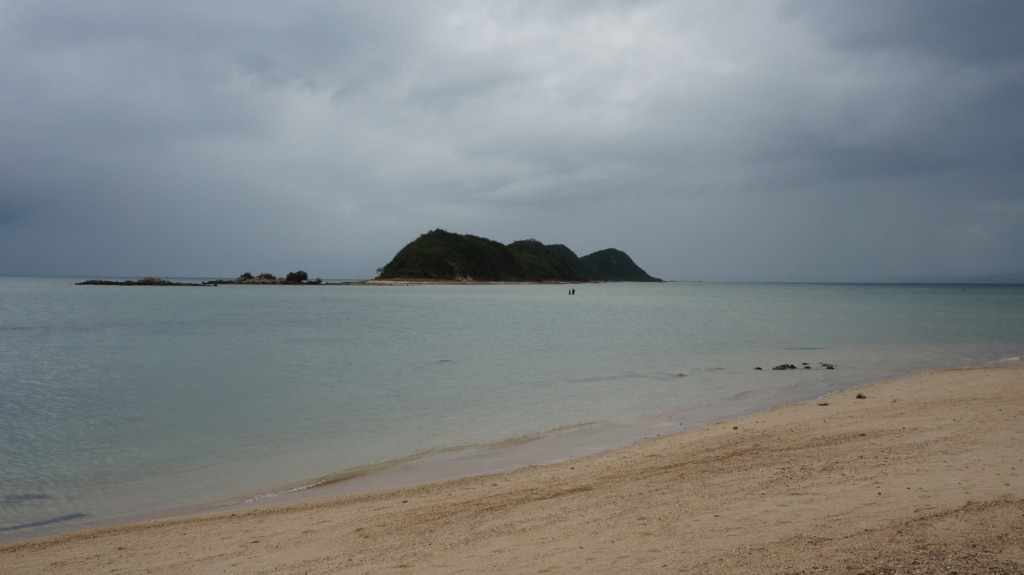 Overall the scenery was nice, but much less spectacular than it should be if the sandbar were totally visible. We don’t know if we didn’t come at the right time, or if the sandbar was damaged like everything else because of the typhoon.

We then headed back to the restaurant near the pontoon as the group lunch was scheduled at 11:30. I can’t stress enough how much we hate these constraints… if only we had bought banh mi for lunch as we nearly always do ! 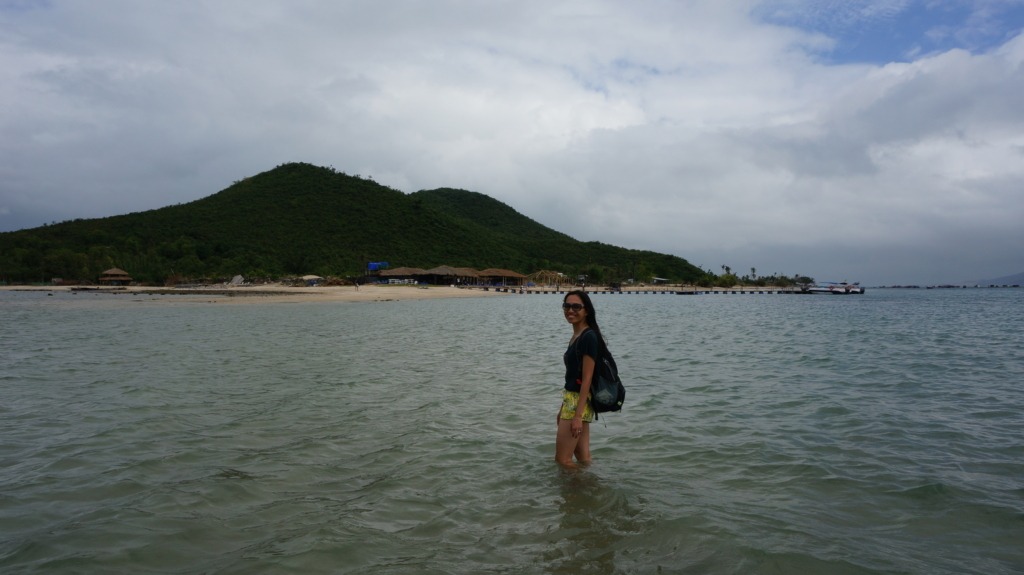 However I have to admit that lunch surprisingly good. It was a hotpot with seafood but also many vegetables. Most of the group members were young Chinese or Taiwanese.

After lunch we had to wait a little bit before heading back to Gia’s harbor.

An unpleasant surprise at the guesthouse

We spent the remaining of the afternoon at Cafe Bonsai (217 Nguyễn Trãi, Vạn Giã). This café is nicely decorated and quiet. We then returned to our guesthouse in order to wear long clothes (as a protection against mosquitoes).

There, the owner announced us that there was no more power in our room and we had to switch to another room. Did you ever try to pack your stuff at night in a room without power ? Well, let me tell you it’s not fun. Good thing I had a flashlight…

The owner had given Thanh the key to our new room, which was actually occupied when she entered it. Vietnamese professionalism at its finest ! After another switch of keys, we settled in a room on 1st floor, and immediately regretted the upper level. Indeed, the owner had the very annoying habit of listening to music at a very high volume. While it was not audible on 2nd floor because of the elevation and walls, our room on the 1nd floor had a window to the corridor, and its poor quality meant we were bothered by the sound until later than 10pm !

On a positive note, we enjoyed our evening outside nearly as much as the day before. While our dinner was so-so, we had absolutely excellent smoothies, and an equally excellent caramel custard. I was surprised to see children riding roller-skates nearby. Since when does anyone take part in physical activities in Vietnam ?

Overall, while we were a bit deceived by Diep Son’s sandbar, we really enjoyed Gia’s ambiance. It was at the same time lively and laid-back, the kind of city were we would have stayed longer if there had been more places to visit around !