Da Lat is a large city located in Vietnam’s central highlands. It’s a former French holiday town, where many colonial architecture examples can still be found. It’s a widely popular destination, especially amongst local, Chinese and Russian tourists. Does it mean that Da Lat is a kind of mountainous Nha Trang ? Let’s find out !

The first part of our ride was not pleasant. From our guesthouse, we had to go through Phan Rang – Thap Cham on a dusty and busy road. We saw a beautiful Cham tower while leaving the city.

Once we were outside the city, there was less traffic on QL27 but the road became more and more dusty. Many places sold sinh to (smoothies) or nuoc ep (fruit juice), so we enjoyed an excellent passion fruit juice. We reached Tan Son around lunch time, and had some rice with vegetables. After a short but tiresome ride, we looked for a guesthouse. We found a nice-looking one after the crossing where the QL27 splits, behind the electronics shop thegioididong. The room and bathroom were clean and the place was quiet… that is, until the loudspeakers on the main avenue started broadcasting propaganda at 6 in the morning and never stopped !

In the afternoon, we had our usual coffee break at the quiet-looking Bonsai café, near our guesthouse. We were enjoying the place, until the neighbor started slaughtering a pig; we had to withstand the noise of the poor animal’s agony for close to five minutes.

The dinner was good; Thanh had some com ga while I only took the rice, but with an excellent sauce made of green chili and lime. I then stuffed my body with sugar by eating several kinds of che (Vietnamese sweet), plus some custard !

We left Tan Son early as there was a lot of climbing planned that day. In case the weather was really hot, we bought some additional water, carrying 6 liters in total ! However as we started cycling, the sky was rather threatening and it even started raining very slightly. We went up very slightly during the first ten kilometers, then we reached the start of the mountains and the serious thing started.

Until we reached the plateau, around twenty kilometers later, the road nearly never went down : at some point we reached 1000 meters of uphill and… only 4 meters of downhill ! However the slope was never steep, most of the time around 4% and at most 7%. It was very pleasant cycling, especially with the cloudy weather that prevented the temperature from rising. The road surface was excellent, and there was little traffic. The landscape wasn’t fabulous, but pleasant enough.

Shortly before the top of the climb, there was a café, a more than welcome sight… but as we got closer we realized it was closed ! WHAT THE FUCK IS WRONG WITH YOU PEOPLE ? I dried my tears and resumed climbing; a few hundred meters later, there was another café… and it was just as closed at the first one.

Fortunately, we quickly reached the plateau and the city of D’ran where we had a nice lunch. The husband of the owner had learned French in his Youth and started singing an old French song. His wife apologized for his behavior, saying that he was slightly inebriated, but it was actually rather fun.

From there we had to take a though decision : we could spend the night in D’ran, and climb via a rather steep but short road the next day. The alternative was to ride to Phi Nom, thirty kilometers further, where the road to Dalat seemed more gentle. We chose the second option as we had a lot of time before the night. Unfortunately, the road to Phi Nom was hell. It was very narrow and there was no side lane; plenty of trucks rode there, probably delivering the vegetables and flowers grown in this area. There was nearly no moment of quiet : all the ride was a continuous honking.

We reached Phi Nom in a state of extreme nervousness, and it didn’t help that the town was depressing. It was ugly, with a dirty market along the busy road. We found a nha nghi that looked great, but it turned out that the rooms were located behind the nice-looking building. We passed several rooms which looked like jail cells and were actually long-term rentals.

Our room was not so bad… that is, until it was time to sleep and we realized there was a loud and very weird noise coming from above our room. It was like some kind of magnetic field, and kept us awake until very late. All we wanted was to leave this hell-hole !

The first part of the ride was quick and flat; at some point our road merged with a highway and we ended up in a lane reserved for two wheels, which was nice. Unfortunately it didn’t last and we quickly found ourselves on the QL leading to Da Lat. The scenery was nice (a real forest with real trees), we had a lot of shade and the climbing was gentle. What could have been a great ride was spoiled by the extremely heavy traffic; we probably inhaled more exhaust gas in two hours there, in the middle of the mountains than during all the previous two months combined ! As a positive note, most drivers were really okay; even the usually enraged minivans were rather quiet.

We had booked a room in Tom’s urban homestay via Airbnb. It was the first time ever we booked an accommodation on Airbnb, so we had absolutely no idea what to expect. Finding it was a bit difficult, as the given address actually featured a kindergarten. After a phone call to Tom, we found the actual place. Tom was very welcoming and gave us advices on where to go and eat. His homestay is conveniently located, close to the lake, the crazy house and Bao Dai summer palace.

The room was simple but nice, on the last floor of a large house.The bed was comfortable, and there was a balcony offering a view on a large park, and further, on Da Lat’s houses. We had a private bathroom, located on the other side of the corridor; a washing machine and dryer were available. Our stay there could have been perfect… 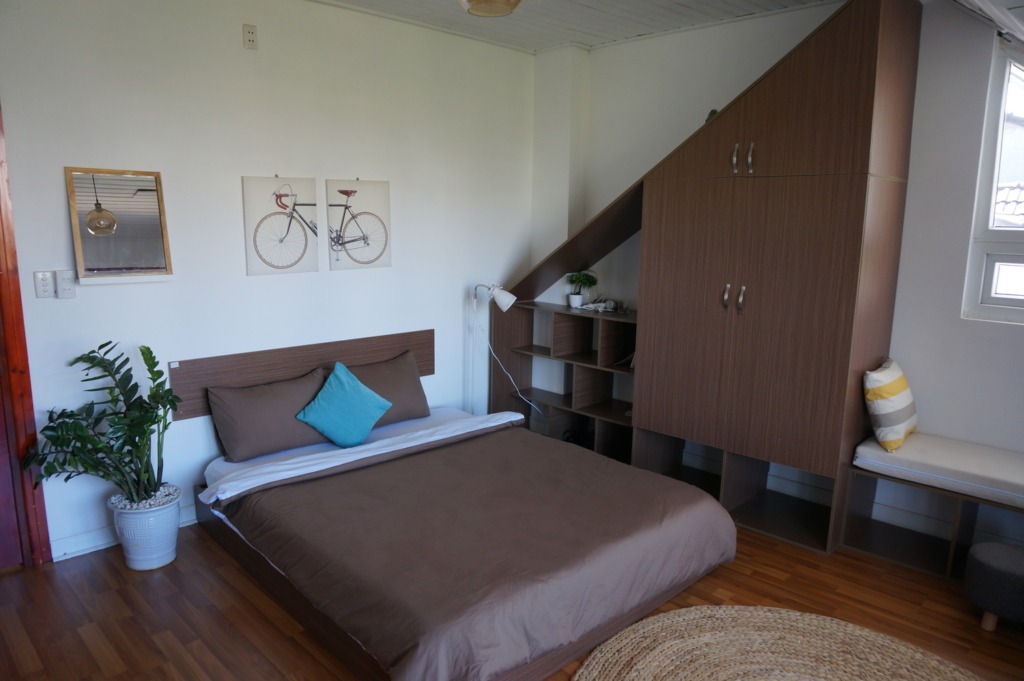 Alas, this is Vietnam and once again, nothing can be perfect in Vietnam. While most of the house has been renovated and was extremely nice, the job on the door to the balcony was botched. There was a lot of air coming in; during the second day, when it was windy outside, the curtains moved even with the door closed ! As a result, the room was very cold in the evening. It would have been great to hang inside, but with the temperature, the only solution was to shelter from the cold in bed, under the quilt !

The architecture of Da Lat train station may remind you of the train station at Deauville-Trouville. However, with its bright yellow color, Da Lat station also made me think of Hoi An’s old town. 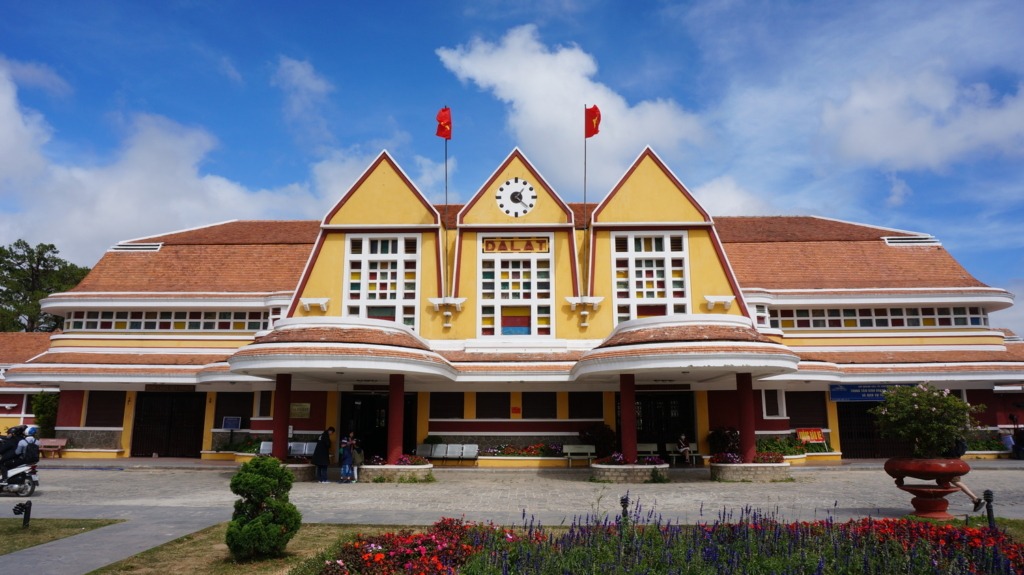 It costs VND 5 000 to access the station. From there, we paid an additional VND 124 000 each to ride a touristic train to Linh Phuoc pagoda, located several kilometers away from Da Lat. The train features old railroad cars, with several levels of comfort; the VIP area was extremely classy. The train ride takes around half-an-hour and is rather bumpy; the tracks are most of the time surrounded by huge greenhouses where most of Da Lat’s fruits and vegetables are produced.

The pagoda’s ornaments were impressive, mostly make of broken glass (or was it ceramics ?). Don’t hesitate to go up using the rather hidden stairs in order to have a closer look at them ! 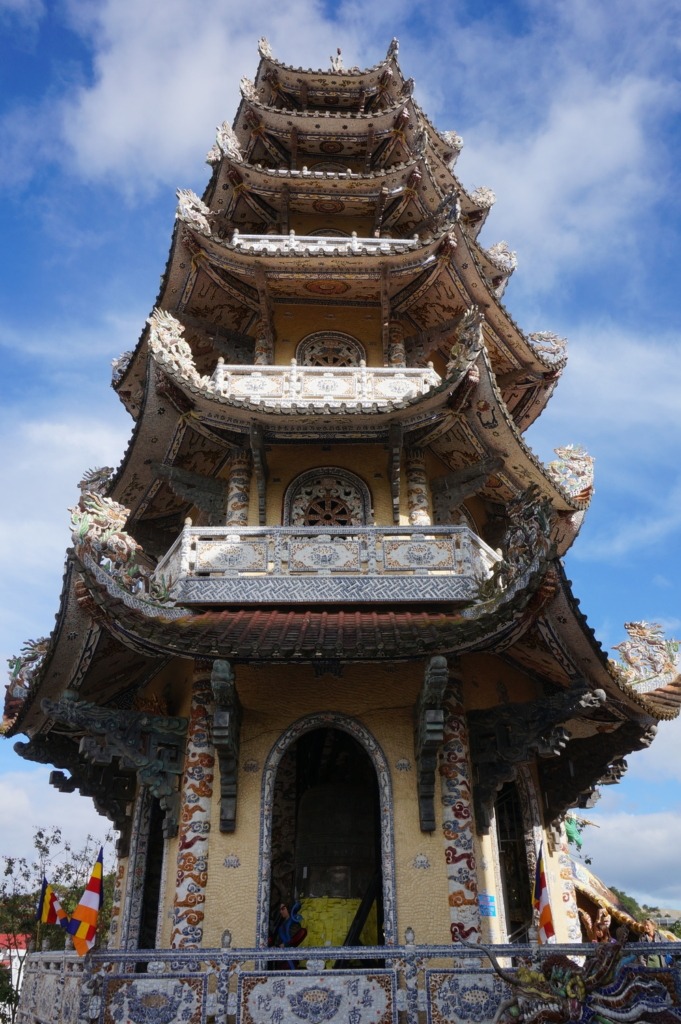 Also note that a sign inside Da Lat train station states that it is linked to the main Vietnamese train network, but it’s actually not the case !

During my previous visit in Da Lat, several years ago, I had loved visiting this place. It’s hard to describe its crazy architecture, inspired by nature but also by Vietnamese minorities (some stairs look like those leading to rong houses). Unfortunately, this time the large groups of visitors made it hard to enjoy this crazy creation. Selfie sticks were everywhere, and the only good pictures I could take was the interior of the rooms, where visitors were not allowed. 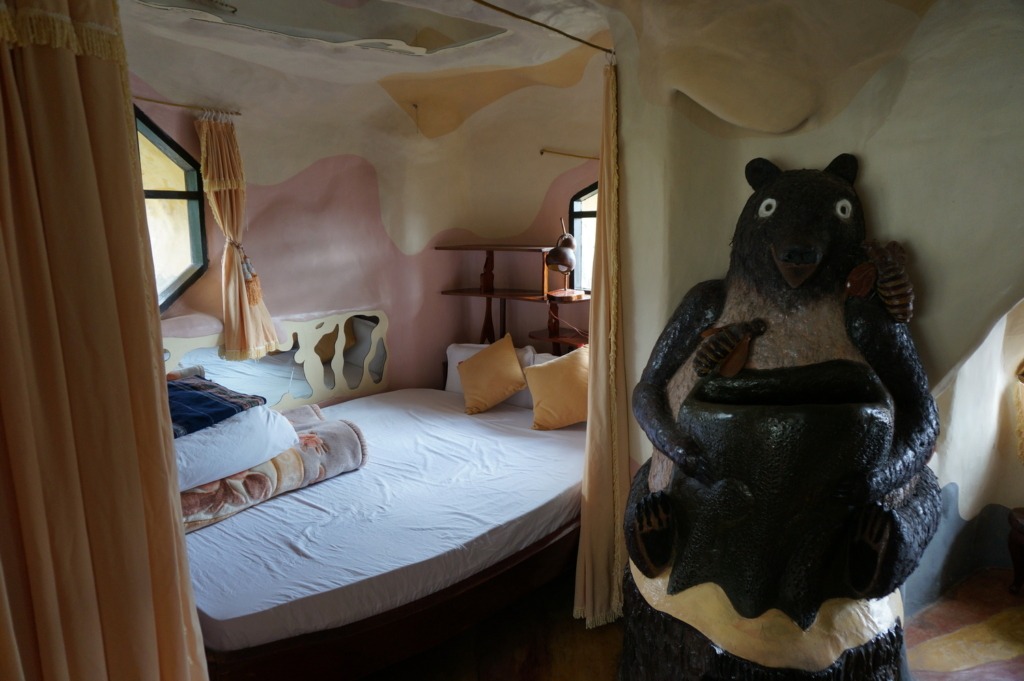 Note that it’s possible to spend the night there, as the crazy house serves an an hotel. The drawback is that you’ll have to vacate the room early, in order to make way for the touristic hordes.

If from the outside this palace of Vietnam’s last emperor is totally boring, the inside decoration is tasteful but surprisingly simple. In spite of the lack of explanations, it’s well worth a visit; feel free to browse Wikipedia’s page on Bao Dai afterwards. 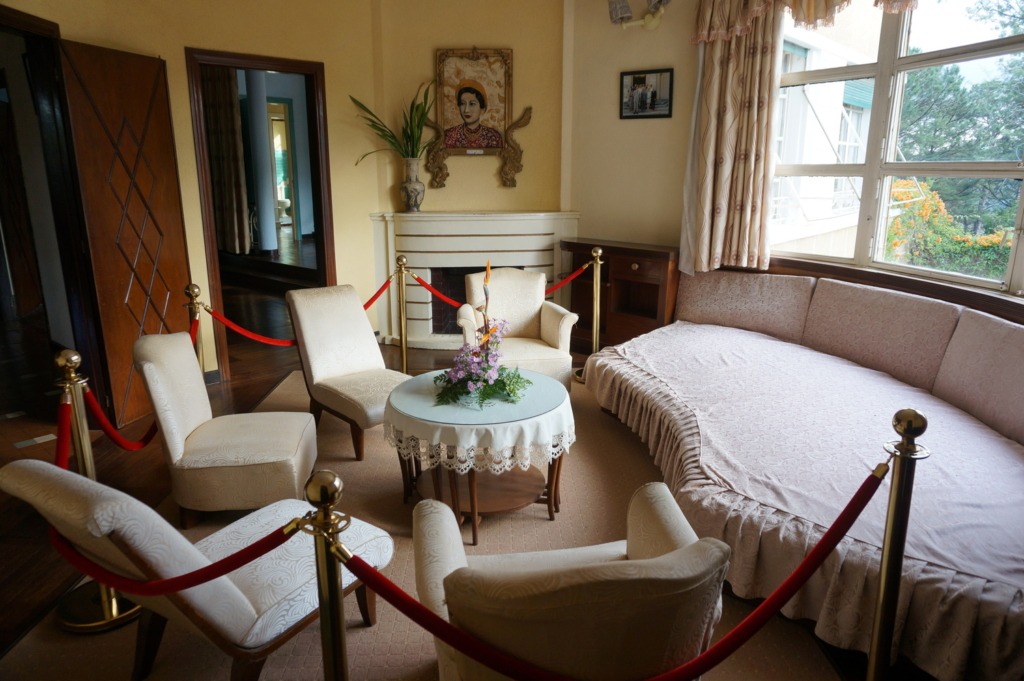 Like most Vietnamese touristic places, the palace is surrounded by absolute crap : ugly statues, ridiculous shops…

We decided to came back to our room by the most direct path, which meant going down a crazy slope on a small street, then climbing the equivalent on the other side.

This café, sometimes referred to as Up Cycle café, was small but extremely well decorated. There was an old piano, bicycles (who would have guessed ?), plenty of old books… There was a second room in the back but the front one was much brighter and pleasant. Coffee s great and prices were reasonable. 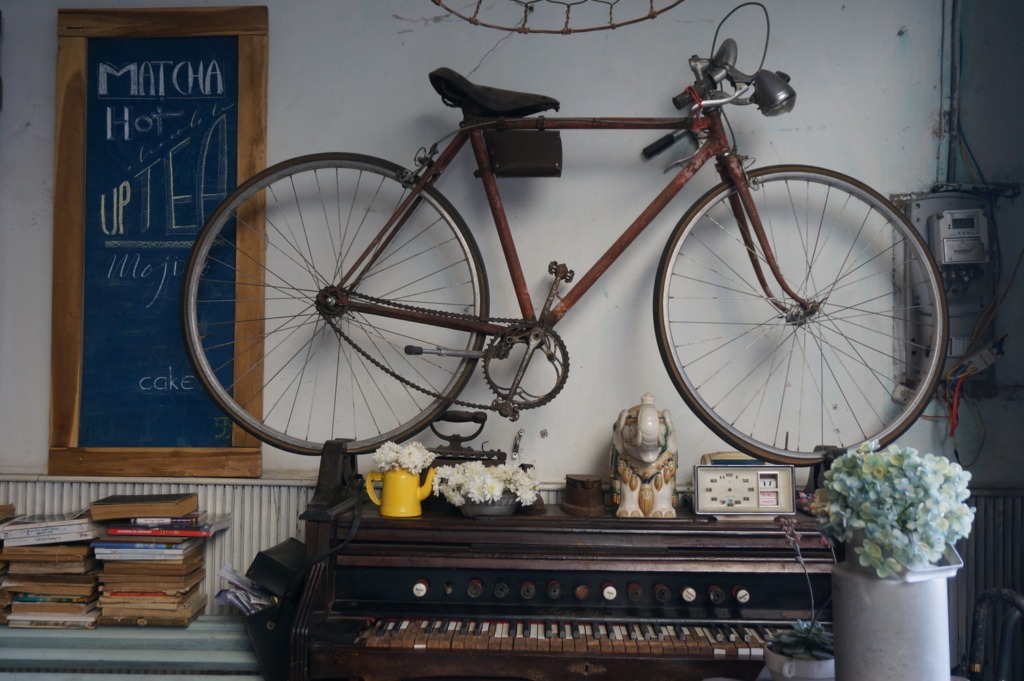 We also tried An Café, by the same owner as the great Rainforest café in Nha Trang. We really preferred their place in Nha Trang; in Da Lat, the café felt impersonal due to its large size.

We read many ecstatic posts about this place (they actually have several shops around the city). And when you enter the shop, it’s very easy to want to buy everything on display. The choice wa huge and looked rather tempting : several kinds of croissants, many sweets, tarts… it was sugar paradise and I had to restrain myself. Alas… nearly everything we bought looked better than it tasted; the croissants were especially deceiving. People who never enjoyed a French or Portuguese bakery, or a Jewish bakery in New-York city may enjoy Liên Hoa Bakery, but other will probably be deceived by this over-hyped place.

As usual, additional pictures may be found on Flickr