Vinh Hy is a small fishing village located on DT702, around 30 kilometers South from Cam Lap promontory. After two wonderful days in this beautiful area, it was time for us to keep following the coast along Nui Chua national park. It was probably the first time that we felt kind of sad to leave a place in Vietnam. And the thought of climbing the huge hill again to get out of Binh Lap made us want to stay even more 🙂

The slope on the way back to the main road was as steep as we expected them to be, and it didn’t take long for us to be totally drenched with sweat. However we managed to reach the top, and started a long downhill to the DT702… where the climbing resumed, although it was much less painful than on Cam Lap promontory.

We quickly reached a fork allowing us to reach the coastal village of Binh Tien. The village wasn’t really pleasant, and so was what seemed to be the road to the beach. There was a closed barrier and a sign saying “construction work”… We actually started to head back to the village when three nice villagers started talking to Thanh and told her that the village’s beach was “the nicest of all Vietnam”. Well, if that’s not a strong statement, then I don’t know what it is !

And guess what ? It was at least extremely beautiful. The first thing that struck us was that it was immaculately clean. There was some litter below the trees bordering the beach, but absolutely none on the sand. And it was huge… and totally desert. It was hard to believe it ! The scenery was nice, kind of similar to the previous day. We actually considered spending the day in Binh Tien (we spotted a shiny new hotel called “Aloha hotel”, which seemed rather nice) but finally decided against it. 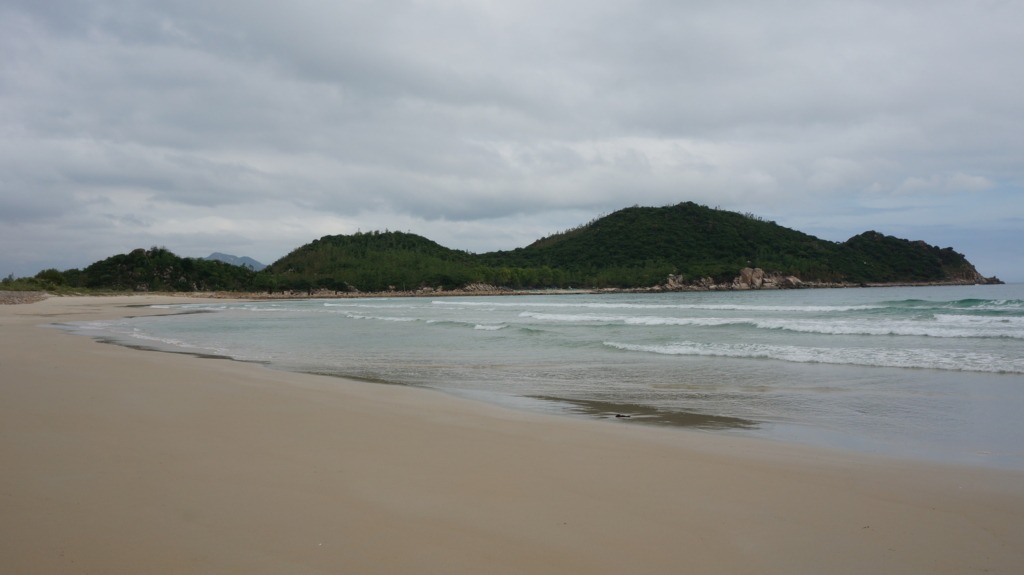 Cycling the DT702 to Vinh Hy

After a long coffee break spent in a hammock, we went back to the main road. From there, the scenery quickly became rather impressive. The first beautiful view we enjoyed was Binh Tien’s beach from a distance. 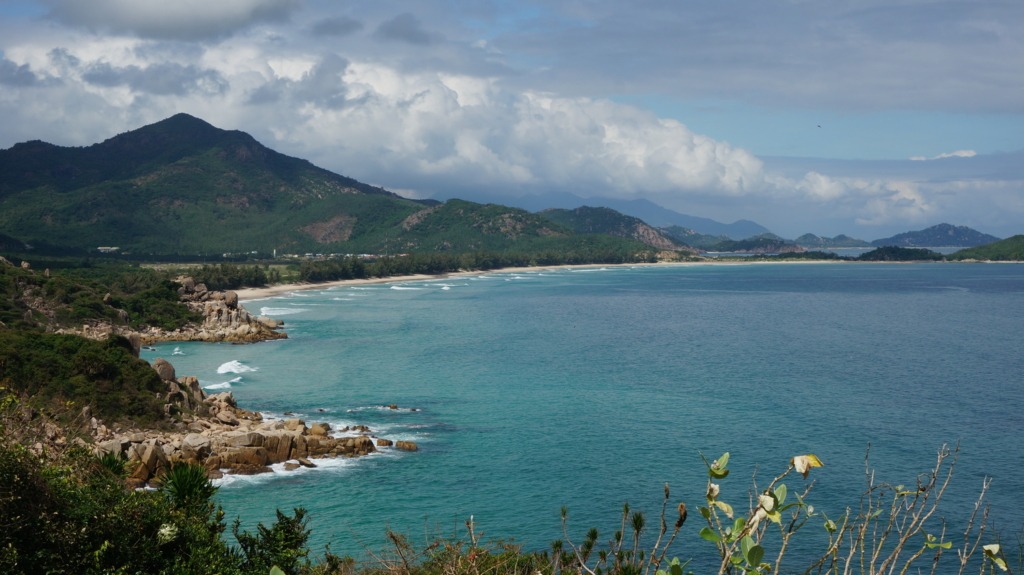 We saw several more beautiful beaches down the road; most of them seemed to be clean while we spotted some trash on a few other. 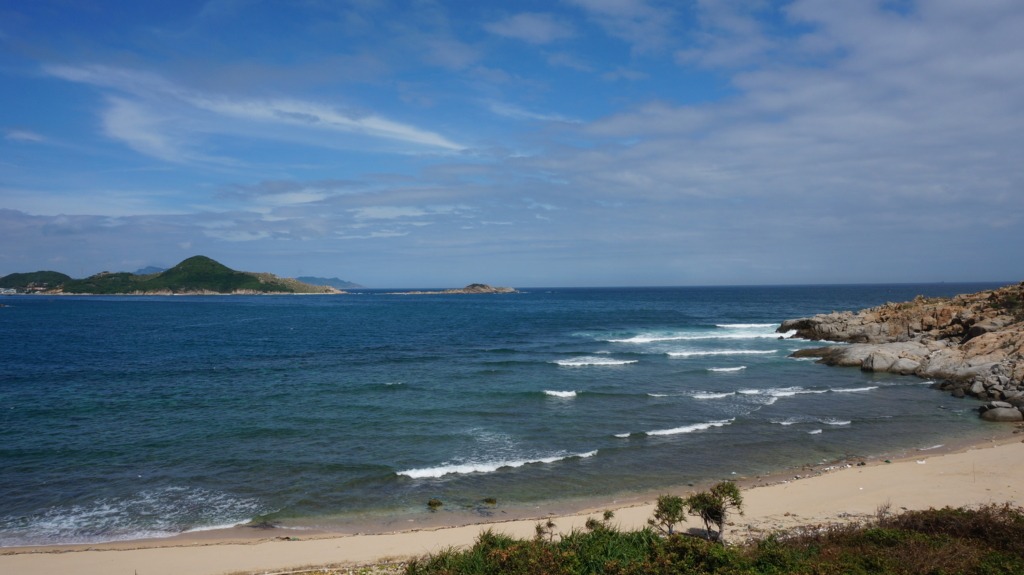 The road kept climbing gently for a long time. Right before the pass, it started to be a bit steeper, but nothing comparable to the morning’s slopes. Moreover the road surface was always perfect, a real cycling paradise ! As an added bonus, a gentle breeze kept the temperature at a reasonable level.

After reaching the pass, we went down all the way to the sea level, and were rewarded by a beautiful view of Vinh Hy’s bay.

This small fishermen village is located in a very beautiful setting. Reaching the city itself was a bit messy as the main bridge was under repair (or more precisely being rebuilt, apparently after being destroyed by the typhoon).

There was a large hotel pompously called “resort”, which is very well located and provides a beautiful harbor view. However the rooms were a bit expensive and we went Anh Thi motel. For 200kD we got a clean room and bathroom.

As we only ate some dried fruits for lunch, we had some bánh căn in a street stall nearby the motel. The old lady selling them was very lively and smiling, a welcome change from many other places ! We found out that she also served breakfast so we planned to go back there the next morning.

The harbor was quite picturesque; I took about two thousand pictures of blue fishing boats, which is my favorite thing in Vietnam after cà phê sūa đá Sài Gòn. 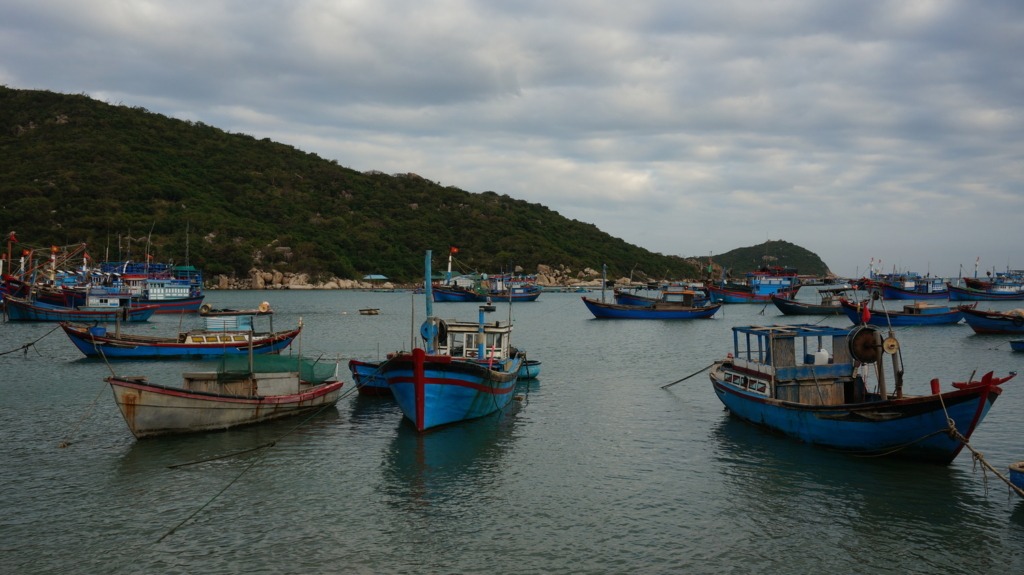 In front of the harbor, fishermen were repairing a huge fishing net; it seemed large enough to cover the whole town !

We had dinner at the “resort”. The menu was large and the food was quite tasty; we ordered three dishes and had troubles finishing them all, especially after eating bánh căn just two hours earlier. A few groups of Vietnamese tourists were also having dinner there, so the place was quite noisy… and it didn’t improve once they plugged a huge loudspeaker so that everyone could enjoy their shitty music. I was tempted to “accidentally” make it fall in the swimming pool but managed to refrain myself.

If you arrive at Vinh Hy late (meaning basically after the night has fallen), the resort will probably be the only place still serving food. Also note that there’s no ATM there, so once again, bring enough cash !

We came across this place that got mentioned to us by a girl at Dao Hoa Vang homestay the day before. It’s located around 7 kilometers South of Vinh Hy. There’s supposedly a cave there, but we couldn’t find any trace of it ! However we had the opportunity to take nice pictures there. 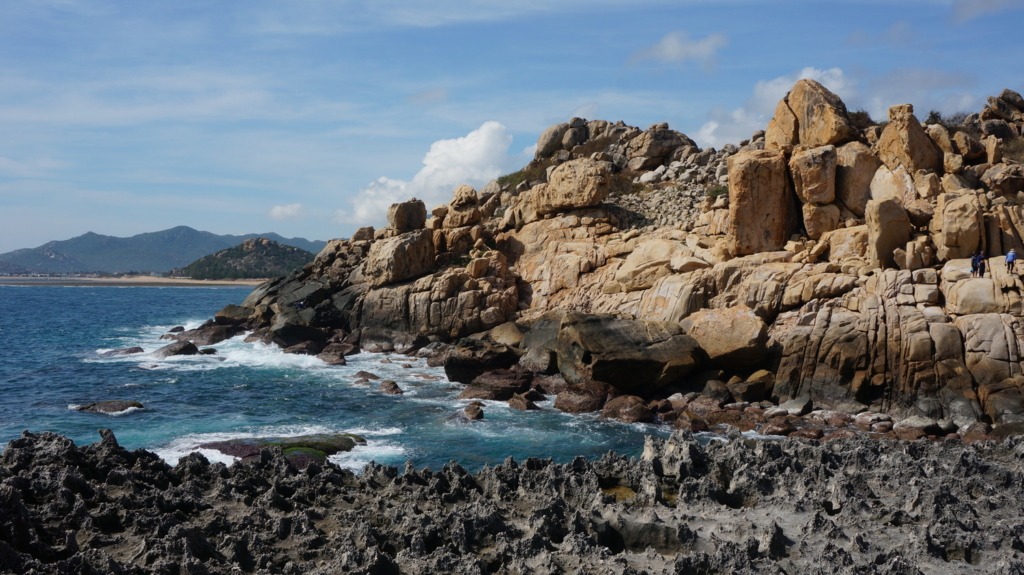 This large city – which I always call “blah blah blah blah” as I never remember its name – is located less than 40 kilometers South from Vinh Hy. It’s actually two cities (Phan Rang and Thap Cham) that became one.

After having yet another noodles soup for breakfast, we started climbing a bit, went downhill and passed Rai Hang. From there the road was mostly flat. The scenery was rather arid, however we saw many grapeyards. Overall it was much less impressive than between Cam Lap promontory and Vinh Hy.

As it was extremely hot this day, we stopped in a café before reaching our destination. There we hesitated between staying in the city center or close to the beach. We chose the beach area, and checked in at Minh Duc guesthouse, where a nice but windowless double room cost us a reasonable VND 220 000. After a more than welcome shower, we started looking for food. It was around noon and the sun was at its zenith; walking on the streets without much shadow was hard. All street-food stands seemed to be closed and we finally found a restaurant selling rather pricey fried rice.

We went back to our guesthouse via the beach, which was a surprisingly pleasant place. The sand was clean and there were not many buildings lining it. Lounge chairs and sun umbrellas were provided in front of several hotels; we came back a bit later to enjoy a drink at the “relax bar” located inside the Ninh Chu Saigon Hotel (you can order inside and the staff will bring you your drinks).

In the evening, it was much easier to find food. Many street-food stalls are located in the first lane between Yen Ninh and the beach. Most serve bánh xèo and bánh căn.

The next day we had plans to visit the sand dunes located around 10 kilometers south from Phan Rang Thap Cham. However, going there between 9am and 4pm seemed impossible due to the unbearable heat. We decided to spend this time doing some needed shopping, withdrawing money and of course drinking coffee 🙂

For breakfast we went back to the roundabout where Yen Ninh and Truong Chinh meet; it was a few hundred meters away from hour guesthouse and there were many street-food stalls there. We had a very tasty bánh mì ốp la, then I tried to withdraw money from the four ATMs located nearby. The one from our favorite ATM (SacomBank) didn’t work, another rejected my card, while the third one emitted a weird error message as I was completing the transaction. Upset by this total failure, I didn’t even bother trying the last one.

Our next stop was the local Vinmarkt for some shopping – sun cream had a tendency to disappear quickly under the recent weather ! -. Usually, we appreciate this chain of supermarkets, but this time we had an unpleasant experience. One security agent required us to leave our bags (containing our computers) in a locker at the entrance, and we had to pay to park the bicycles.

We then tried once more to find a working ATM. I tried one Dong A Bank ATM, but the crappy machine refused the withdrawal as there was no paper to print the receipt. Another ATM restricted withdrawals to less than one million dong (fourty euros !). It was driving me crazy so me decided to look for a café. We ended up in a road with a crazy traffic, and stopped at the first café we saw. The waitress was grim, the place noisy, and the table dirty. What a morning !

The lunch in a nearby vegetarian restaurant gave us some consolation, as the food was good. However the crazy temperature meant that we were more interested by drinks than food ! As we headed back to our guesthouse I finally tried the last ATM from this morning, and it allowed me to withdraw 5 million dongs (around EUR200), but for a large fee of 3%…

Reaching the sand dunes was easier than expected. We left the city heading South, following the sea; shortly after passing a long bridge, we turned right towards An Hai village. On the main road, there was a sign for the sand dunes… but this is Vietnam so of course there was a second sign later and then, no more ! However, as we got close to the village we spotted the dunes far away. There was a first fork where we kept going straight ahead, then at a second crossing we turned left in order to get closer to the dunes.

The road quickly became more of a dirt path with a lot of sand, and we reached a place where we could park the bicycles; they also sold food and drinks. The dunes were located a few hundred meters further; there was a small café, and more parking space where a tourists bus was parked.

The contrast between the sand dunes and the rather green surroundings was striking. The dunes weren’t very high, but they still made an impressive sight. They turned to golden as the sun went down; staying there to watch a sunset was tempting, but we didn’t want to ride at night in the middle of nowhere ! 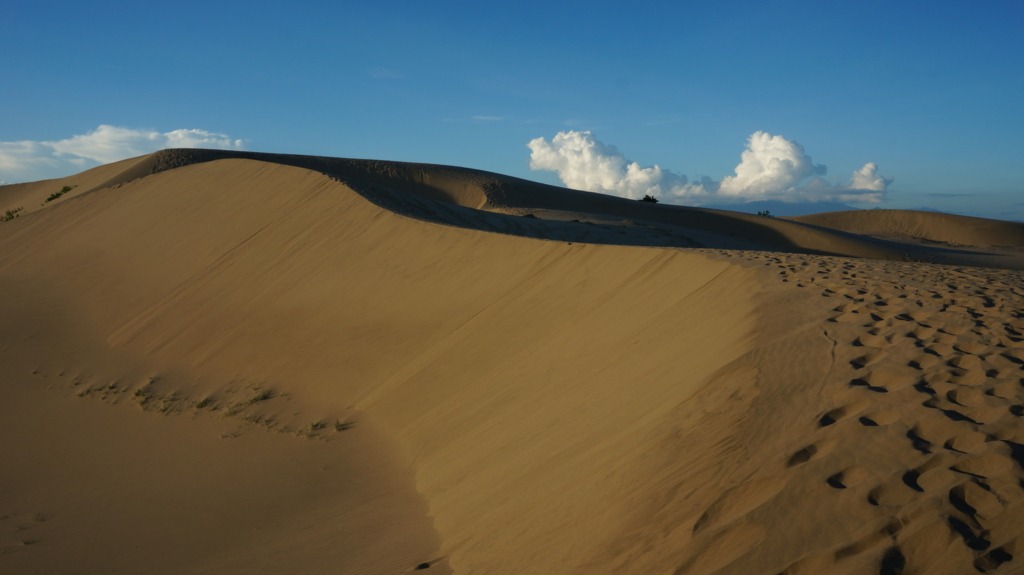 To our surprise, the bus we saw earlier transported Chinese tourists, all equipped with expensive cameras and huge lenses. We found them taking pictures of the dunes, where children were going down the steep slopes. Meanwhile, a Vietnamese guy was shouting instructions to the children with a loudspeaker. So much for spontaneity !

Two young girls from the group got fed up with the circus and came talk to us. It turned out one of them was the daughter of the people owning the place where we parked the bicycles. Her English level was actually pretty good, and we had a pleasant chat. We went back to her parents’ house, and had some tasty sugar can juice. Thanh started talking to the owners; they apparently pay around fifty dollars each month for their daughter’s private English lessons, a large sum compared to their low financial means !