After leaving Nakhon Phanom, our plan was to follow the Mekong on road 212 until Nong Khai. We had done very little planning regarding accommodations; all we knew was that there seemed to be regularly spaced guesthouses along the road.

Once we left Nakhon Phanom’s bike lane upon reaching the Friendship Bridge, it was a bit painful resuming cycling on road 212. In this area it’s a large road with quite a lot of traffic. For lunch, we stopped in an nice-looking small restaurant and to our greatest surprise they had an English menu. In spite of the cheap price, food turned out to be excellent.

We decided to continue our itinerary on a small road along the Mekong, and were rewarded by incredibly scenic surroundings. 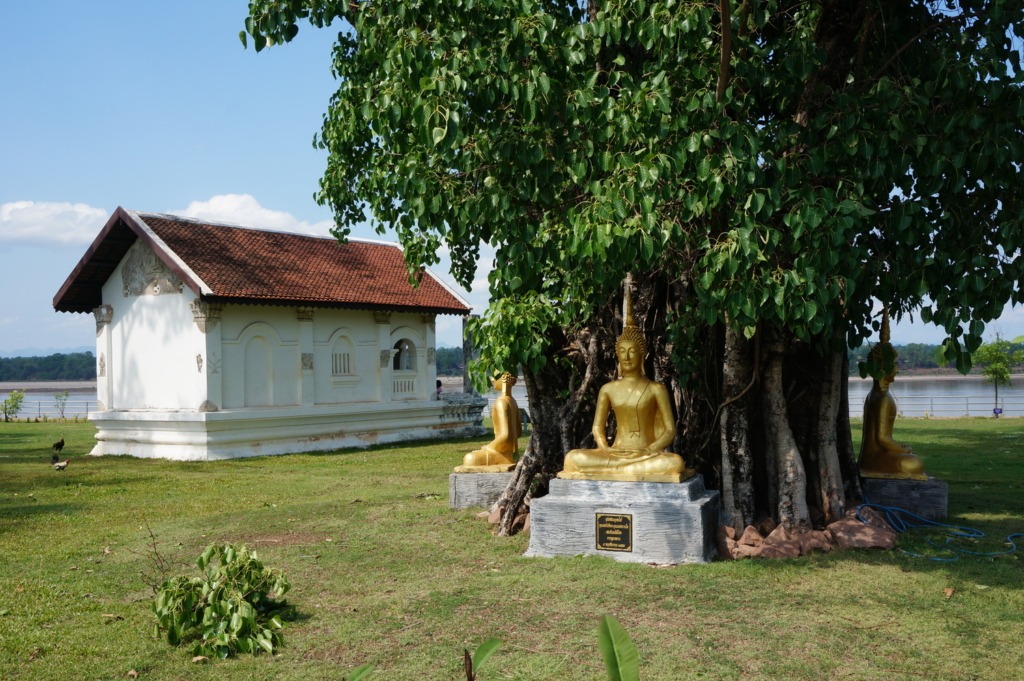 After a while, we were back on road 212 and saw many dinosaur statues. Remember the one in front of the Friendship Bridge ? Well, here there are many more. This definitively intrigued us, and after a few more miles we got the answer to this mystery ! Indeed, we came across a large sign advertising Tha Uthen’s dinosaurs’ footprints. It turned that workers recently found large footprints in this area ! 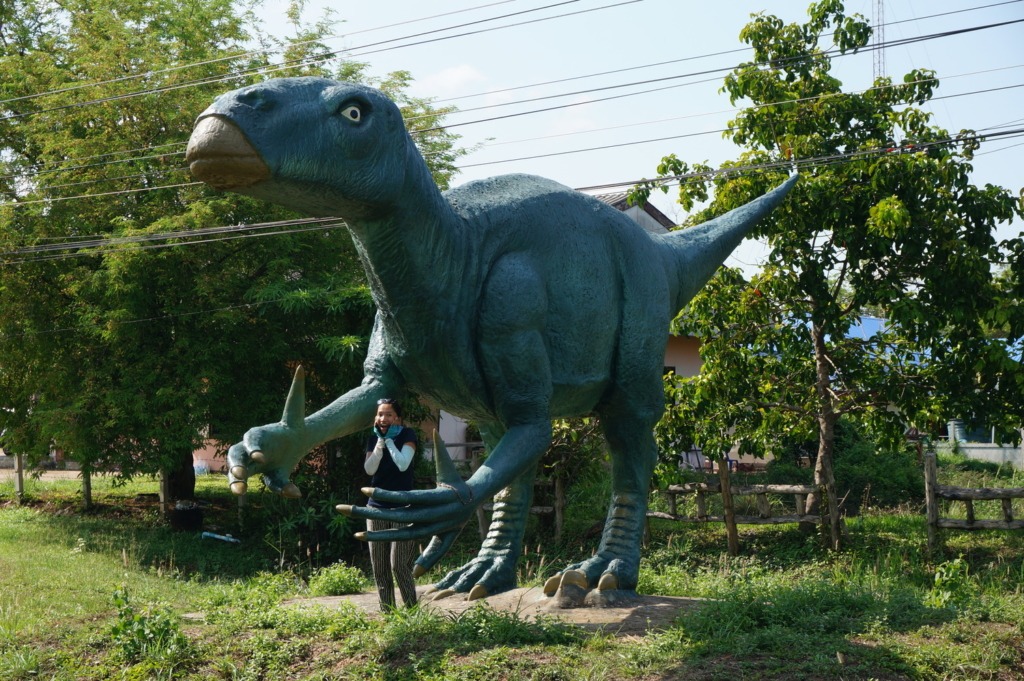 Finding accommodation was a bit tricky that day. The first place we tried – bungalows in the middle of nowhere – was full, and so was apparently the second. However, after discussing a bit with the lady who welcomed us, we had the surprise to see a Westerner emerge from one of the bungalows. He was her husband, and told us that one bungalow was free until the next day so we could sleep there for the night. It turned out he was from Norway, and we had a great time talking to him; he was a very friendly and talkative man. Their place was very great, very comfortable and well maintained; we were lucky to be finally allowed to stay there !

We left the Mekong for one day in order to go to this lakeside city. We booked yet another bungalow close to the lake; as the lake was rather large, we expected a beautiful sunset. Unfortunately there was a thunderstorm in the late afternoon, so after a quick dinner we came back to our bungalows and didn’t leave them until next day.

One word of warning about such small places : while finding food for breakfast and lunch is easy, don’t linger too much before heading out for dinner. Many small restaurants close in late afternoon, or at best server an early dinner.

The next day, we were able to buy some sweets for breakfast; the friendly and smiling seller explained us how to reach a nice place beside the lake. Indeed, part of it was developed, and we could comfortably sit while enjoying both our sticky rice and the view.

This is where we started getting seriously charmed by Isaan. We got incredible bungalows in front of the Mekong. They were made of wood, apart from the large restroom which was in concrete. It featured a large roofed terrace where we could eat or work while watching the Mekong. The room contained everything we needed to be comfortable, including a mini-fridge and a water boiler. Moreover, the person who welcomed us was extremely warm and friendly; it was truly a pleasure to check-in there ! 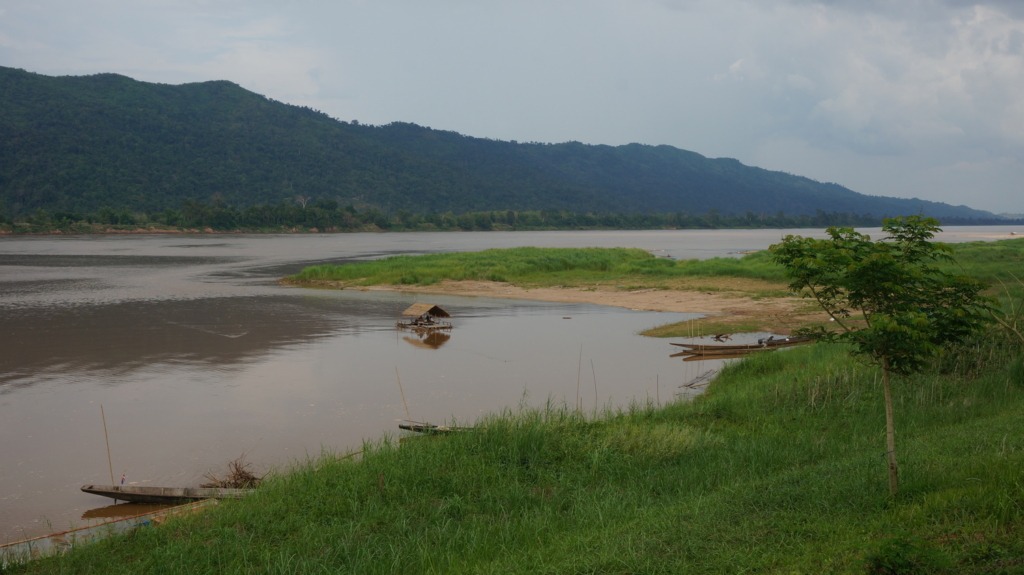 There are several small restaurants and drink stalls in the city. We had some troubles finding some food on a Sunday evening, so we resorted to buying stuff at 7-Eleven and indulging in junk food. Yeah 🙂

The only real drawback I could find – but which unfortunately is probably present in many places – was the traditional Saturday evening noise. Neighbors played extremely loud music late at night.

We left Bueng Khla on a small and pleasant road surrounded by a lot of banana trees. 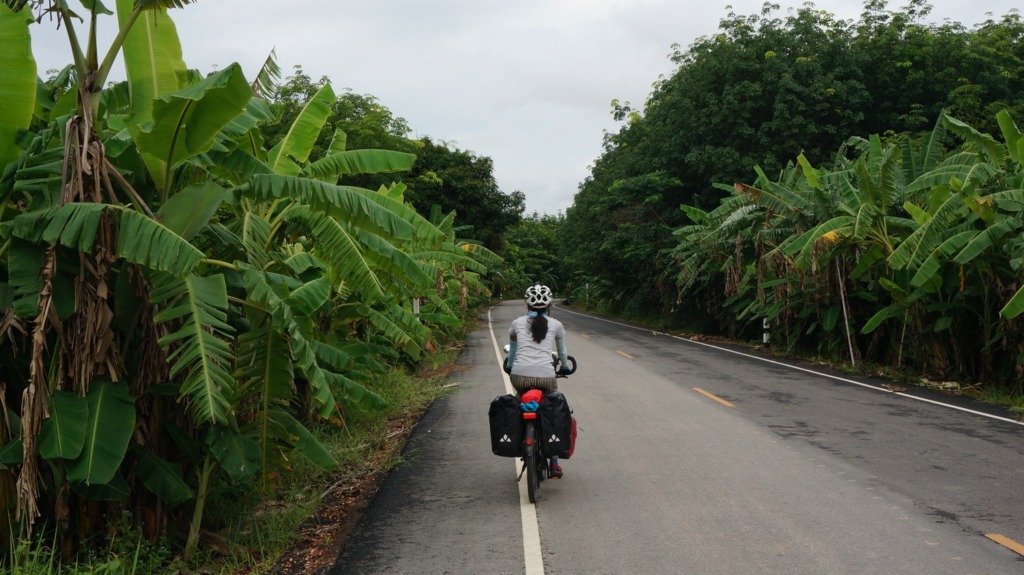 After several kilometers we came across a small church in Nong Doen; while the church itself wasn’t beautiful, it boasted a very well maintained garden in addition to the usual Mekong views. Once we were back on road 212, the scenery got as usual less interesting.

I had my first flat there; switching to a new air chamber was rather quick and convenient, thanks to the trees which provided me a lot of shadow. However I had the unpleasant surprise to realize that most of the air chambers I brought didn’t fit my wheel, although they’re of the right type !

Upon entering Bueng Kan, it didn’t look like it would really appeal to us. But as soon as be left the road 212 in order to get closer to the riverfront, it became clear that we would enjoy ourselves there. There were many food opportunities, and like in Phanom Nakhom for example, the river banks were nicely developed.

While during the day the river’s surroundings were rather desert, in the late afternoon they got much more lively. Cyclists rode on the bike lane, people practiced aerobics and tai chi, jogged or simply walked around. It gave the city an appearance of vitality.

As often, the Mekong banks were a great place to observe sunsets. The one during our first evening there had incredibly vivid colors. 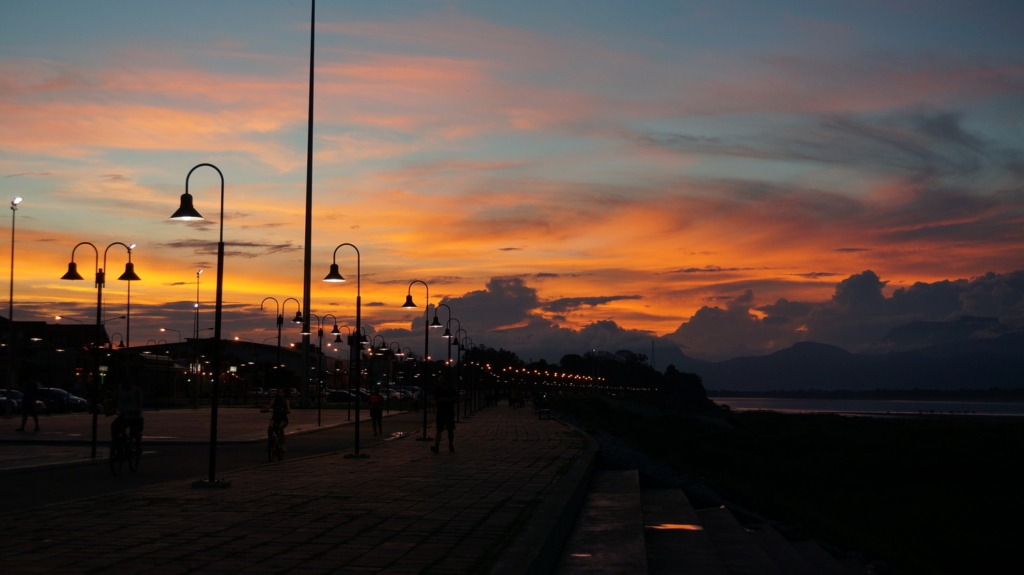 Overall, Bueng Kan was one of our favorite cities in this area; it was large enough to offer diverse food opportunities, but small enough that everything was close. Moreover, there was a sense of vitality which we really enjoyed.

Note that one thing we really appreciated during this Isaan trip was the different ambiances from one day to another; we slept in both rather large cities and very small villages, allowing us to see many aspects of everyday life.

This hotel conveniently located in front of the Mekong offered large rooms with air-con and fridge for a very reasonable THB 400. While the very small bathroom was badly in need of some renovation, we enjoyed our stay there as the room was clean, quiet and comfortable.

The friendly English-speaking owner put us at ease as soon as we arrived. In addition to the good drinks, we tasted excellent home-made muffins. Our second visit was slightly less pleasant, though; the music was too loud to be able to concentrate, and we didn’t get the cheesecake we were promised the previous day as it was a failure.

From the outside, this restaurant felt a bit impersonal; however, large pictures of the meals were displayed on the wall, so we chose to go there for convenience. We didn’t regret our choice : we managed to order excellent curries (learning the Thai word “kueng”), and we actually appreciated the food so much that we returned there the next evening !

I honestly don’t remember much about the road this day, as we mostly cycled on road 212 and I was focused on several bicycles troubles – a weird noise when pedaling, and poorly centered brakes –

The hotel we chose offered rooms with or without Mekong view. As the ones with a view cost THB700, we chose the more basic ones; we could enjoy the view from the restaurant anyway. For THB500, our room was comfortable and came with a mini-fridge; unfortunately the bathroom lacked maintenance. However, that this price included a basic breakfast (tea or coffee, boiled eggs, soft bread/butter/jam, rice porridge). Moreover, we had access to a swimming-pool, which was clean and a genuine pleasure to use !

There was an attached restaurant, but the quality/price ratio was very low. Our Massaman curry was deceiving and expensive, while the fried mushrooms were good (but also expensive). In the village, we found several small restaurants as well as a colorful market. 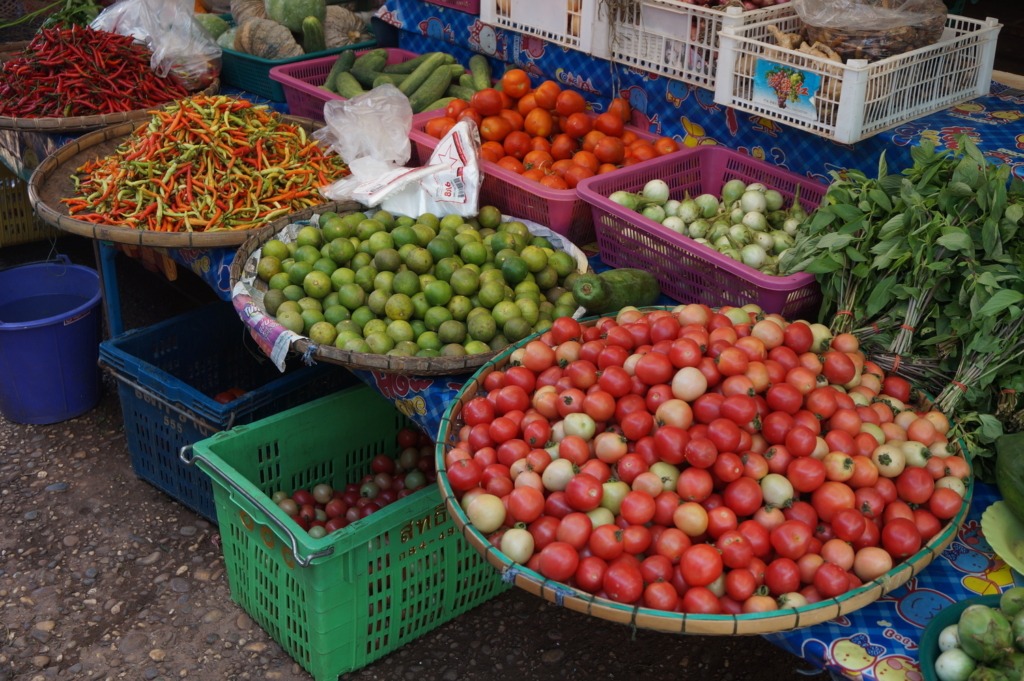 The road 212 from Pat Khat was rather large and monotonous; we avoided it for several kilometers by taking a small road through the countryside. The scenery was was rather beautiful but the road was more of a dirt track sometimes, making our bicycles muddy.

In Phon Phisai, we found an excellent hotel, once again very close to the Mekong. The Rim Fang Khong was an extremely recent accommodation offering an incredibly clean room and bathroom. A few meters from the hotel, we particularly enjoyed our diner in front of the Mekong. We bought food from the small nearby market, then ate in a small covered area surrounded by flowers and plants. It was lovely and extremely peaceful !

Like many Thai cities, Phon Phisai featured several temples. This impressive statue was found in front of one of them. 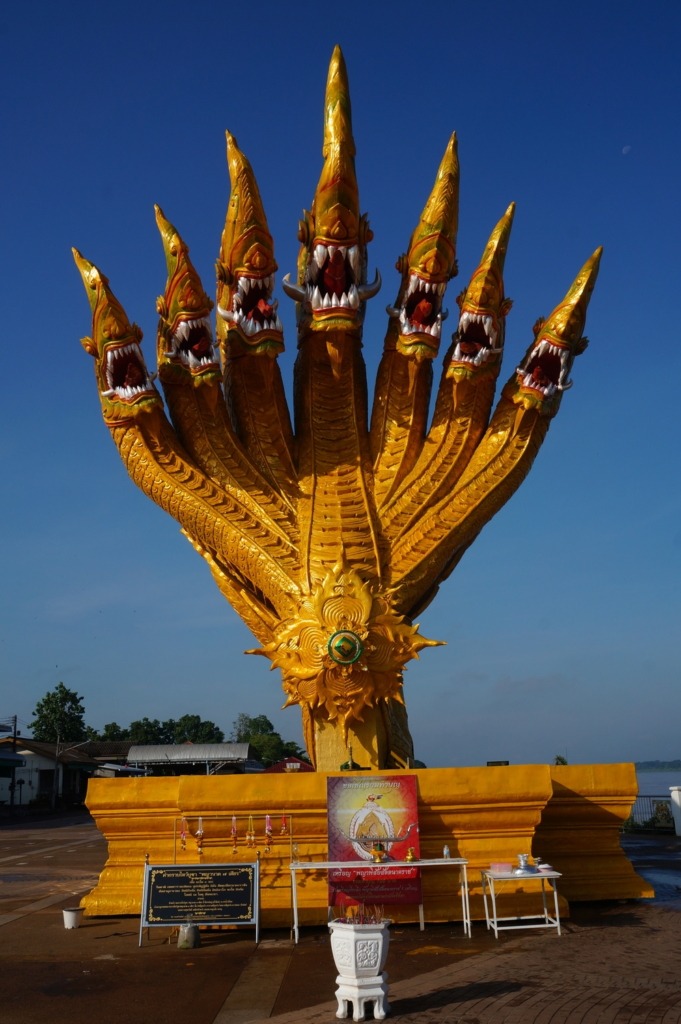