After lingering in Savannakhet for nearly as long as our visa allowed, we finally decided it was time to cross the border once more. Our goal was to explore remote Isaan, following the Mekong from Mukdahan.

The large bridge used to cross the Mekong is located 6 kilometers North of Savannakhet. Compared to the messy border crossing and unfriendly custom officers at Chong Mek / Vang Tao, this was night and day. It still felt a bit disorganized, but this was probably due to our arriving by bicycle. The staff there was very large and helpful; most of them actually spoke Vietnamese, which helped us getting understood.

As I expected, we were not allowed to cross the bridge by bicycle, so we had to put the bicycles on a bus for two ridiculous kilometers. They explained us that there were more people crossing than usual because this was week-end, so we may have to wait a bit to find a bus with enough space. The bus tickets themselves cost LAK 28000 (a bit less than 3 euros), plus THB 200 (around five euros) for the bicycles.

Another consequence of crossing during the week-end was the overtime charge of LAK 10 000 per person; we also had to pay THB 100 to get Thanh’s passport stamped.

Overall the whole process took us close to 90 minutes, including a long wait for the bus; however it felt very convenient. The total cost, one converted to a single currency, amounted to a bit less than twelve euros. It’s not a lot, but we still find it expensive for a border crossing that doesn’t require payment for a visa on arrival ! As a side note, it was convenient that we already had some Thai baht, in order to prevent a crazy exchange rate for some of these fees.

This large city lacked the colonial charm of Savannakhet. The Mekong banks were nicely developed, but lacked the relaxed feeling found on the Laos side. The huge Indochina market was located underground, apparently selling everything you could think of. We were happy to find a large night market, although seating was very limited and there were few vegetarian options.

Our hotel was very pleasant; for THB 350 (less than ten euros), we got a recently renovated room with air-con and a great bathroom. It was located within walking distance of both the night market and the Mekong banks.

The next morning, we had breakfast in a simple roadside restaurant which was beautifully decorated. 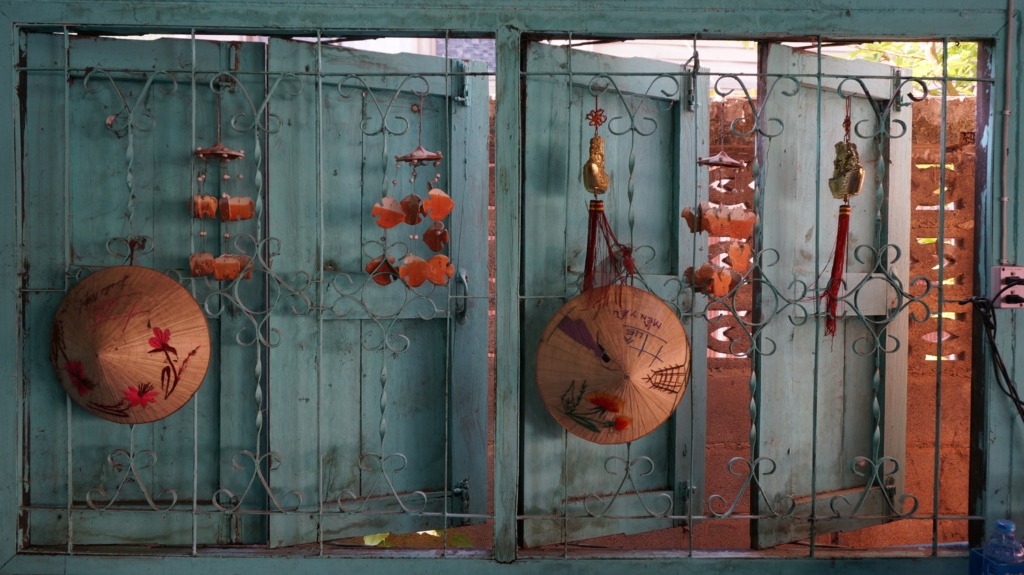 Instead of following the large road 212, we took a minor road located very close to the Mekong. It was an extremely pleasant ride, although drink opportunities were limited. The quality of the roads surfaces and road signs never failed to amaze us, even on secondary network !

At first, That Phanom looked like yet another small, sleepy riverside city. However, it is famous all over Thailand as a major pilgrimage site. The drawback was the inflated accommodations price, which was not matched by a rise in quality. 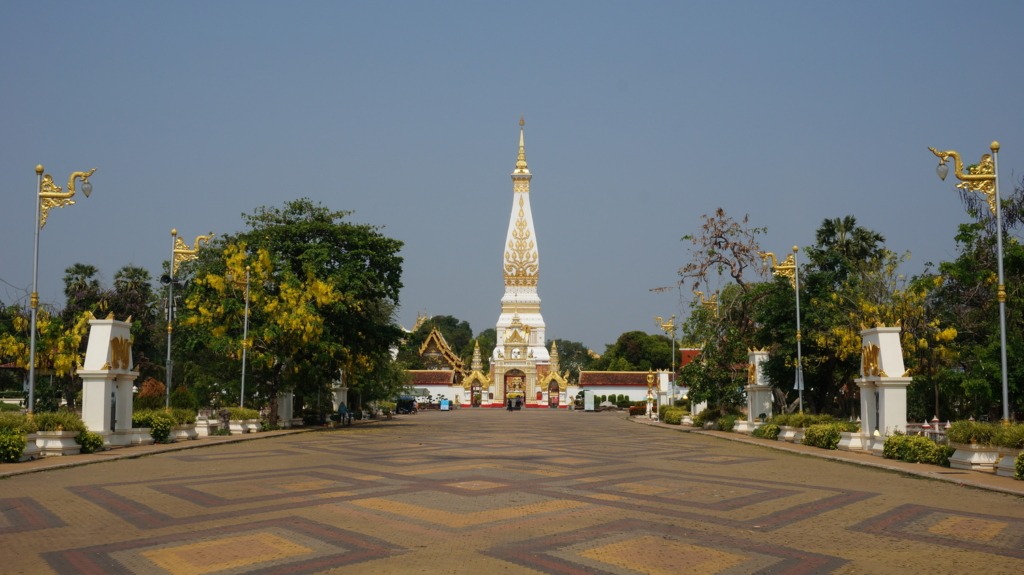 It was a very pleasant city to walk and cycle around, with many traditional wooden houses, in addition to a few beautifully restored few colonial houses. The Mekong banks provided several opportunities to enjoy great food in front of a pleasant scenery. Again, expect to pay slightly more than elsewhere, but the surroundings are worth it !

The ride from That Phanom to Nakhon Phanom was rather boring, as it took place on the wide road 212. However it was a short trip, and we arrived early. Once in the city, we were rewarded by a great and picturesque bike lane. 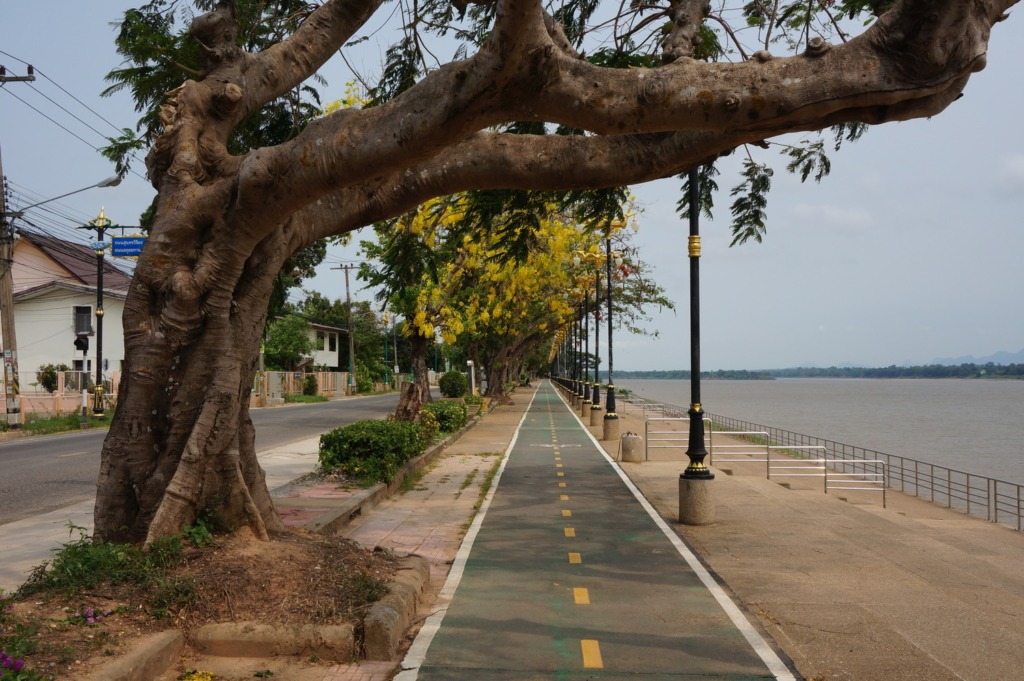 The former Governor’s house was recently restored in a beautiful way. It now serves as a museum; while we weren’t very convinced by its contents which lacked focus, the building itself was well worth a look. 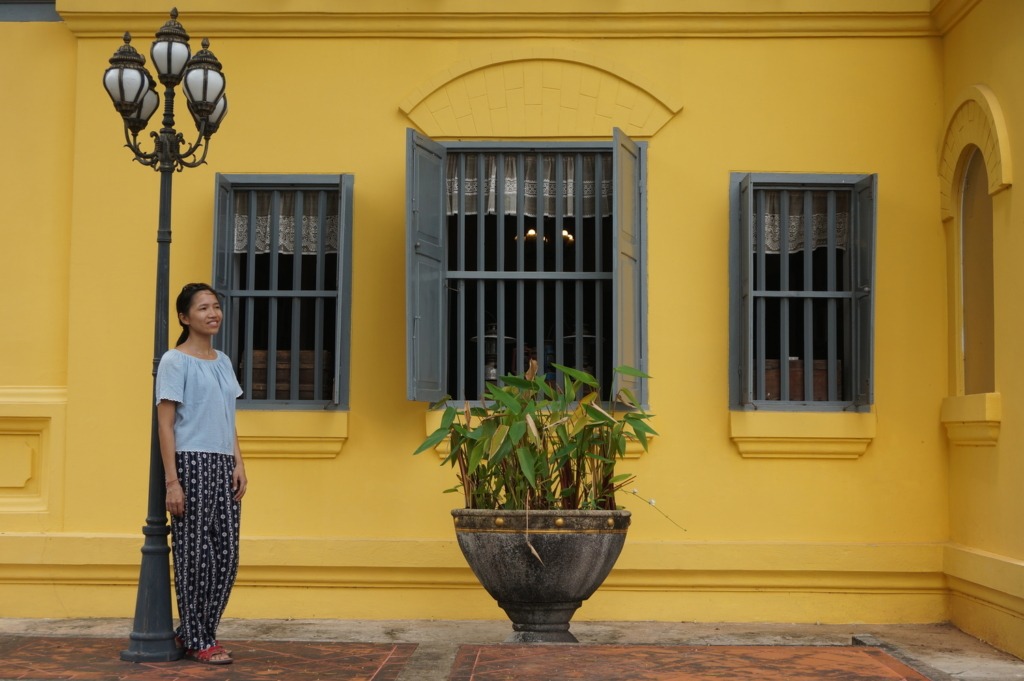 While it was still a work in progress, there was a large walking area along most of the Mekong banks. The view of the karst mountains in Laos was truly beautiful; they reminded me of Yanshuo’s surrounding (China), and made me look forward to cycling Tha Khek’s loop in Laos !

Even people who’re not much into cycling will enjoy cycling there. This great bike lane along the Mekong leads to the Friendship Bridge #2, a large bridge located around 10 kilometers North from Nakhon Phanom. From there, it’s possible to cross to Tha Khek in Laos. 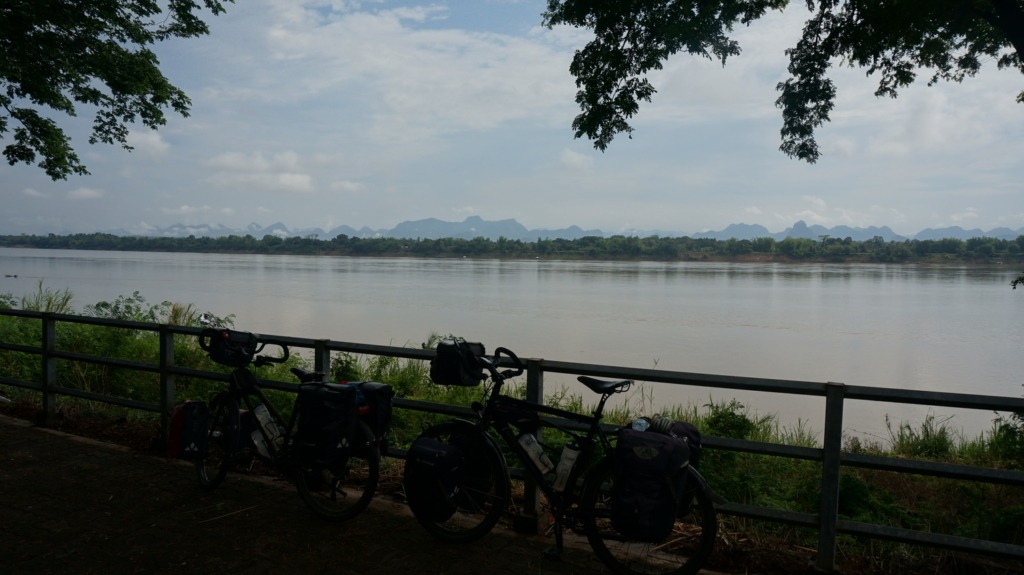 We were intrigued by the presence of a dinosaur’s statue; we found out the answer to this mystery later that day and will reveal it in our next post ! 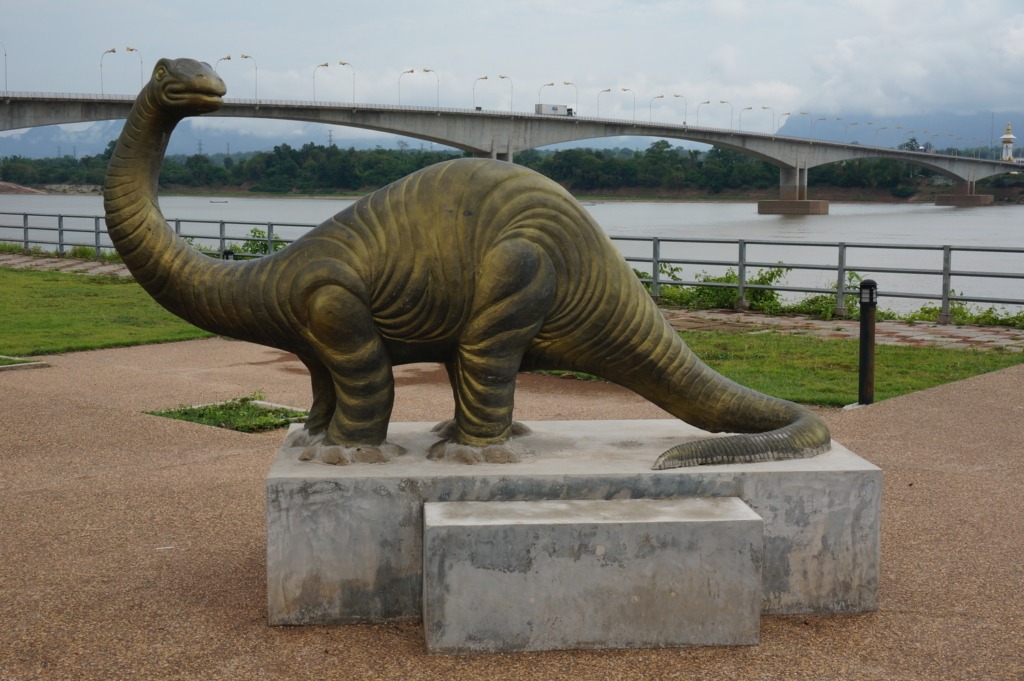 Outside of this place located on the Mekong banks, a large signed displayed pictures of deserts. We decided to break the bank and give them a try ! We chose one made of fresh fruits, several kinds of ice, and brioche with melted butter. It was excellent ! You can find the café’s exact location on their Facebook page. 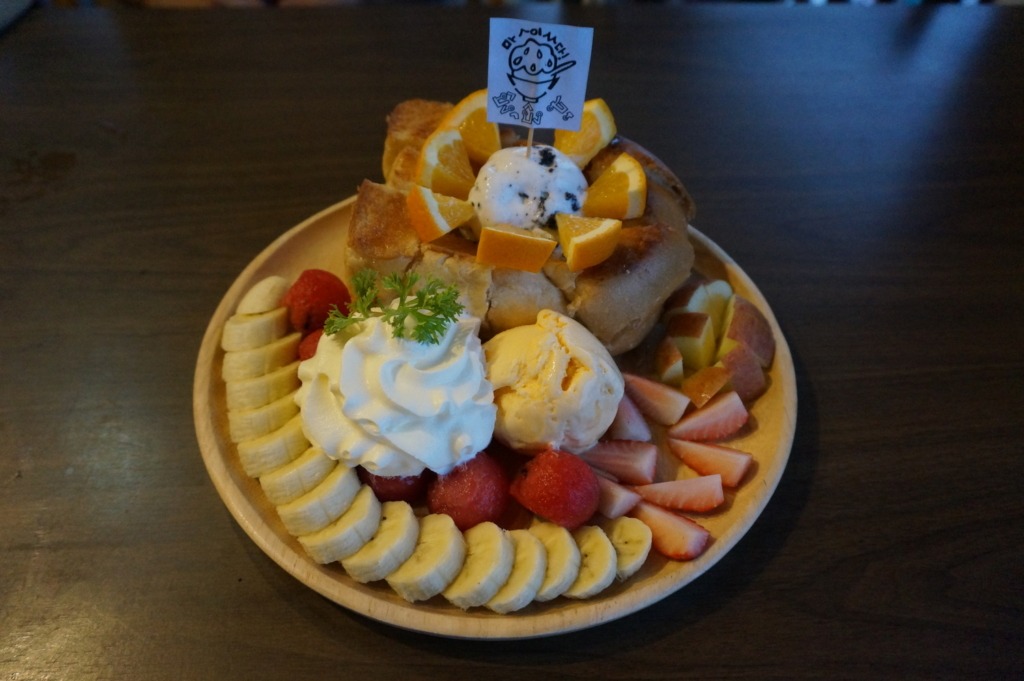 Apart from this place, we ate mostly in small restaurants, so we don’t have any other address to share. Note that a lot of Vietnamese food could be found throughout the city, as there used to be a large Vietnamese population there.

This small hotel was conveniently located, close to the old clock tower and the Mekong banks; unfortunately we can only get a glimpse of the river, as the rooms’ windows offered a view of the opposite street. The hotel doubled as a very atmospheric – but unfortunately expensive – café.