The Bolaven plateau is a classical motorbike loop in South Laos. It also had the advantage of avoiding part of highway 13 on our road from Champasak to Savannakhet.

Located a bit more than 30km North from Champasak, this large city failed to impress us; to us, it was just a stopover on our way to the Bolaven plateau. Our guesthouse was terrible : in the first evening, a couple had dinner on the tables right in front of our window, with a loudspeaker blasting loud music. The second night was more quiet, but there was no more running water at night. It’s safe to say we’re not going back to this place 🙂

I spent a lot of time trying to withdraw money at ATMs; I failed miserably, excepted at BCEL (Banque du Commerce Extérieur Laotioenne) ATMs. All other rejected our card, excepted one Japanese bank which asked for a crazy 3% withdrawal fee !

For food, we went to the touristic Daolin restaurant. The menu is large and offers many dishes, including a large vegetarian choice. Overall it was good and rather cheap for its quality. The only annoyance was a large group of Vietnamese (of course) who smoked and was very noisy right besides us.

We also had cold drinks at Café Sinouk, the most famous Laos coffee brand. Coffee was good but expensive, as was Thanh’s drink (we can’t remember what it was).

Paksong is located on the Bolaven plateau, at an altitude of around 1300 meters. Due to the heat, we were rather concerned about climbing there. As a result, we woke up very early and left the hotel shortly after 6am. After a quick breakfast of banh mi and ice coffee, we started cycling in the morning’s pleasant freshness.

The slope was gentle all day long, usually around 3-4%; as the road was usually dead straight, we didn’t have the feeling we were in a mountainous area. There was improvement work on most of the road, and we were fortunate that our half of the road was generally okay; going downhill would have implied riding on a surface full of gravel and holes !

Paksong itself was a dull city. Vietnamese presence was very visible : we saw many Vietnamese signs in front of the shops, and there many banh mi stalls. One surprising (and welcome !) aspect of the plateau was the fresher – even cold – temperature at night : we didn’t need air conditioner and actually even had to use large blankets to keep ourselves warm at night !

This is the waterfall closest to Paksong. Reaching it from the main road involved cycling on a very bad dirt road, paying a LAK 10 000 entry fee per person plus LAK 5 000 per bicycle for parking, and finally taking steep stairs down. The waterfall was nice but very classical in its shape. 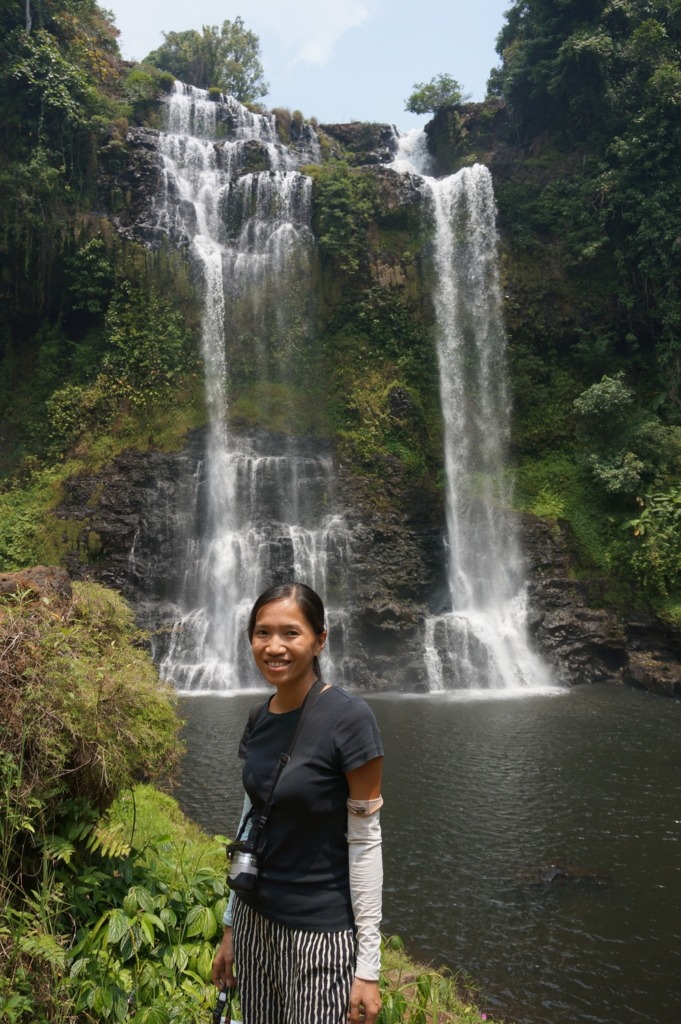 Located two kilometers before Tad Yuang on the way up, this waterfall impressed us much more than the previous one. The setting is spectacular, as if the mountains had been town in two; the waterfall plunges 120 meters into this hole. 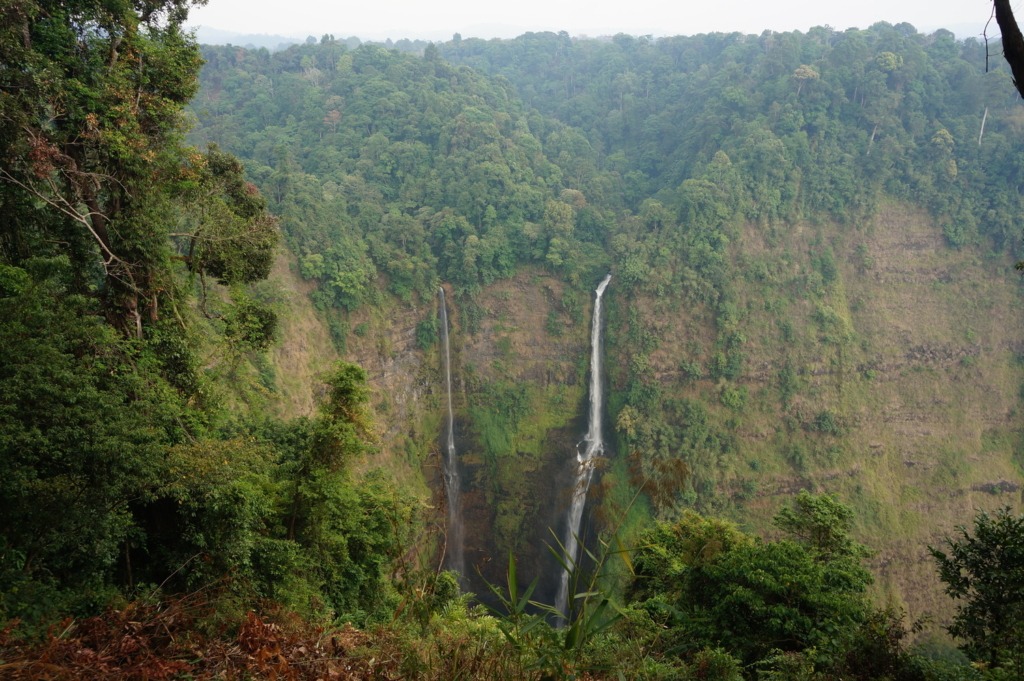 We stopped for lunch as Sabaidee Valley, located 32km after Pakse. It was a rather expensive place, but food was good and it was good to take a break after several hours on the saddle!

In Paksong, we chose to stay at Simmaly Guesthouse, located on the main street. From outside, it really wasn’t welcoming, but the place itself was great. Unfortunately, it was run by Vietnamese people, who couldn’t help but make a lot of noise late at night or early in the morning.

For dinner, we went to a large restaurant doubling as a shop, located very close to the guesthouse. I can’t remember its name but there are not many places fitting this description there 🙂 They had a large English menu; the food was good and their avocado smoothie was excellent.

Our ride to Tad Lo was mostly downhill. The gentle slope allowed us to enjoy the landscape effortlessly; however, at some point the slope became steeper and as we quickly lost altitude, we could actually feel the temperature rising. Note that although the plateau is famous for its coffee growing, it was paradoxically very hard to find iced coffee. Also, we were rather concerned about the landscape; we still have nightmares about the ugly scenery in Lam Ha (South of Da Lat), where all trace of the original nature had been cleared to grow coffee. However, these fears proved to be unfounded and the scenery was pleasant. 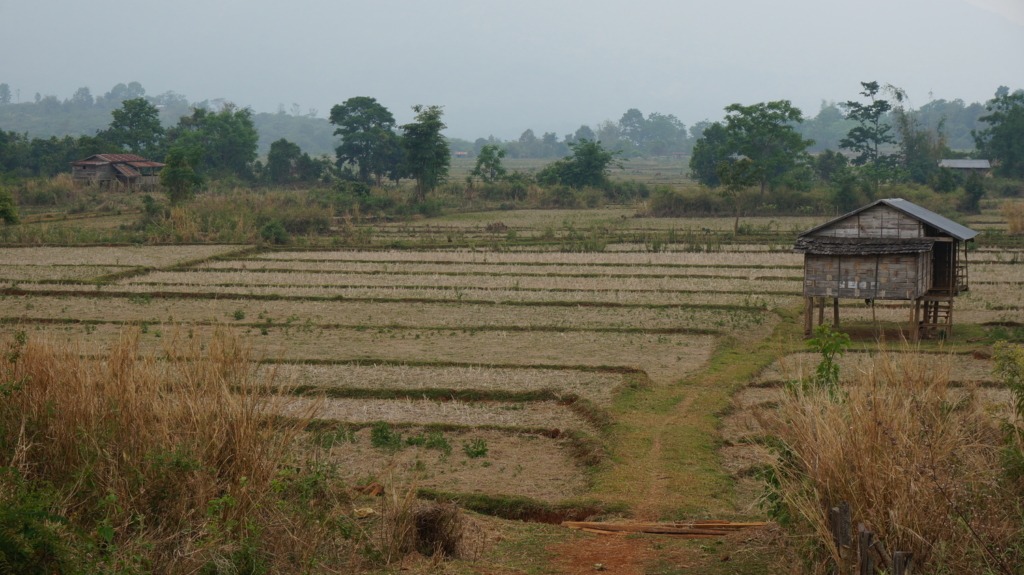 We reached Tad Lo in the middle afternoon, and quickly settled down at Fandee Guesthouse (see below). Remember how much we loved Champasak ? Well, in Tad Lo we also just felt like staying basically forever. While these are two very different settings, both feature great accommodations, excellent food and beautiful scenery while seeing few tourists. Basically, Tad Lo is a typical Laos village, with two street mostly devoted to accommodation and restaurants for foreigners.

There are two waterfalls very close to Tad Lo, as well as a third one located 10 kilometers away. We didn’t check the latter as there was apparently no water. The first one is visible from the village’s bridge; many children can be seen playing in the water. 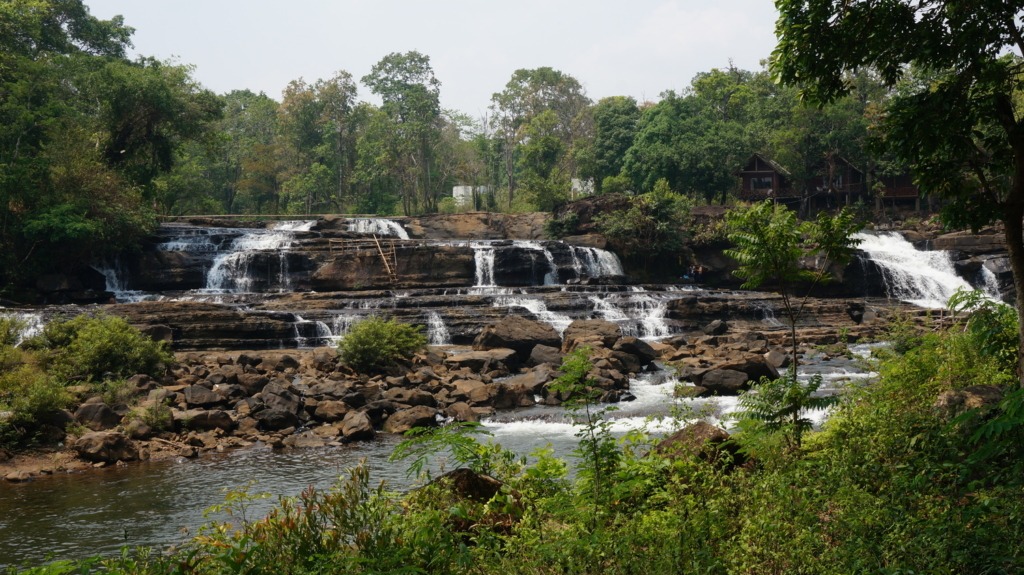 The second one need a bit of walking; as we visited during dry season it was not exactly impressive, but still made a nice sight ! 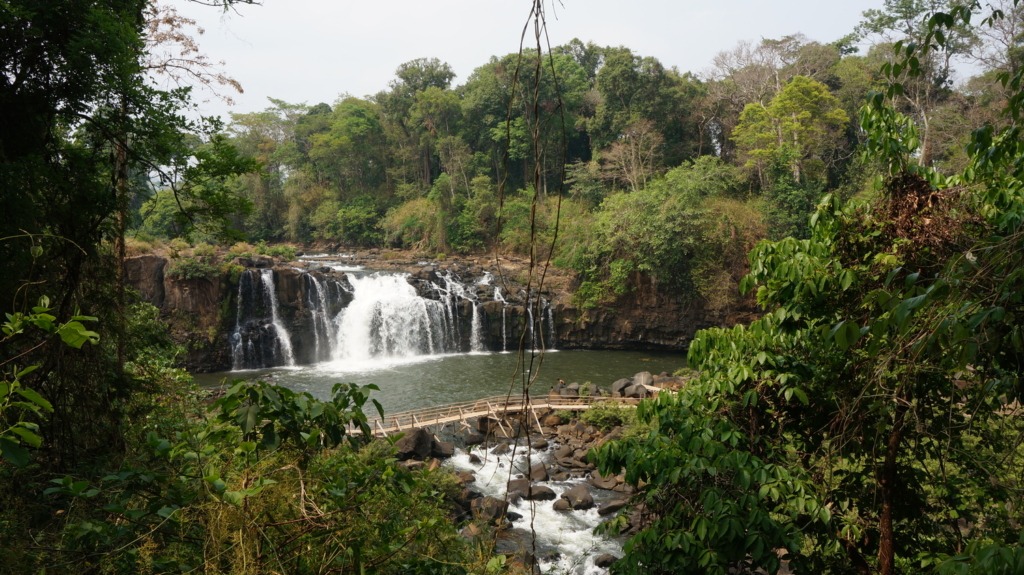 This guesthouse featured four wooden bungalows. There was a large bed, a well-designed bathroom with hot water, and a small terrace with a hammock. They were solid and well-designed; one very appreciable aspect was the space between the bungalows, which allowed privacy and insulated from neighbors’ noises. They had a food and drink menu, featuring Laos food as well as a few French cheeses dishes. 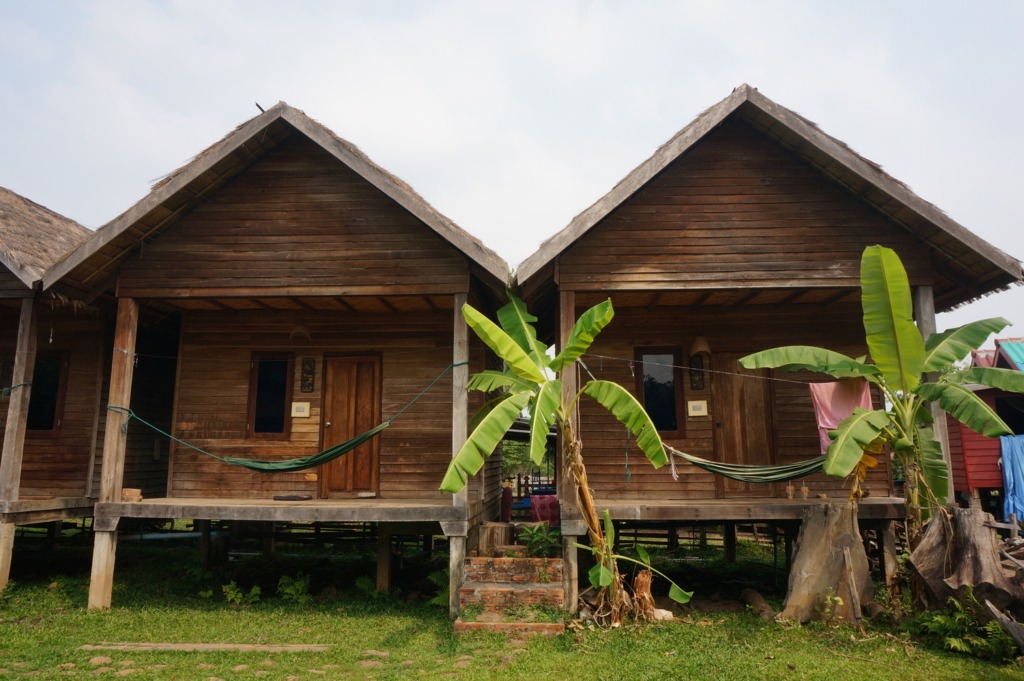 This was our favorite place for food. Their breakfasts were very good value for money : LAK 35000 for an American breakfast, or LAK 15000 for a large potatoes tortilla. I seldom choose Western food in this kind of place as it’s often deceiving, but there the tortilla was very good. For lunch, their spicy red curry with vegetable was excellent, probably the best meal I had in Tad Lo. Servings were very generous and quality was excellent.

They served several cocktails made of lao-lao, a rice alcohol. Their sour cocktail made of sugar cane and lime really reminded me of Ti Punch, and was excellent. The special cocktail with pineapple and passion fruit was less strong but also extremely tasty.

The talkative American owner and his family were very nice and we felt extremely welcome there. Food was okay although not as good as Palamei.

They had a short menu featuring basic but tasty Laos food. There was also some Western food, and just like at Palemei we were impressed by its quality; the French fries were just excellent. The fried spring rolls are also worth trying. Just be patient as everything is made to order and may take some time !

The menu was in English but very little English was spoken there. Their bungalows appeared to be much more rustic than Fandee’s, but had a great view on the river.