After spending nearly one month in Thailand, we were a bit concerned about entering Laos. Indeed, in Thailand everything had been very easy, even in remote Isaan province. Food was excellent, accommodations were good, and most people were extra nice. As our experience in Cambodia had been so-so, especially regarding food, we expected to regret Thailand quickly. But surprisingly, it wasn’t the case; in fact, we absolutely loved our first days in Laos !

Going through customs was a bit messy, even on the Thai side. It was hard to find out where to go, especially with bicycles. After getting stamped out of Thailand, we found ourselves in a no man’s land with no idea where to continue. Finally, a Thai military motioned us to go through a small road, which lead to a large complex. There was a café, a working ATM and several shops. I withdrew some money at the ATM and we went to get our visas. The process was rather quick and painless, although very unpleasant as the person you have to talk to isn’t visible and it’s very hard to understand him. It cost me $30 to get a 1 month visa, while Thanh didn’t have to pay anything. The whole process took less than 15 minutes, which is faster than at Cambodia border.

The 16W road heading West was surprisingly good. Surface was overall very smooth, and the landscape was pleasant. There was little traffic, and we enjoyed cycling there. After 40 kilometers, we reached the crossing to Champasak. We decided to push on a bit first in order to get some food. We managed to order a salad, which unfortunately wasn’t vegetarian but was good anyway.

The 30 remaining kilometers to Champasak were even quieter than the morning. Landscape was pleasant, and we quickly reached the Mekong. We saw several very impressive and beautiful trees along the way; overall it felt much greener than in Cambodia.

Champasak : exactly our kind of place

Champasak is ideally located, sandwiched between small mountains and the Mekong. It’s a long village, spreading over five kilometers, and basically laid along one street. It’s extremely green, with many trees and gardens; beautiful wooden houses and a few colonial houses line up along the road. While few of them were in a bad shape, other have been renovated and looked stunning.

It’s is the kind of place that we absolutely love but which may bore other people to death. The combination of excellent accommodation and great food in a beautiful place seldom visited by tourists made Champasak look like heaven to us. However, if you’re looking for full moon parties, then Champasak may not be for you 🙂 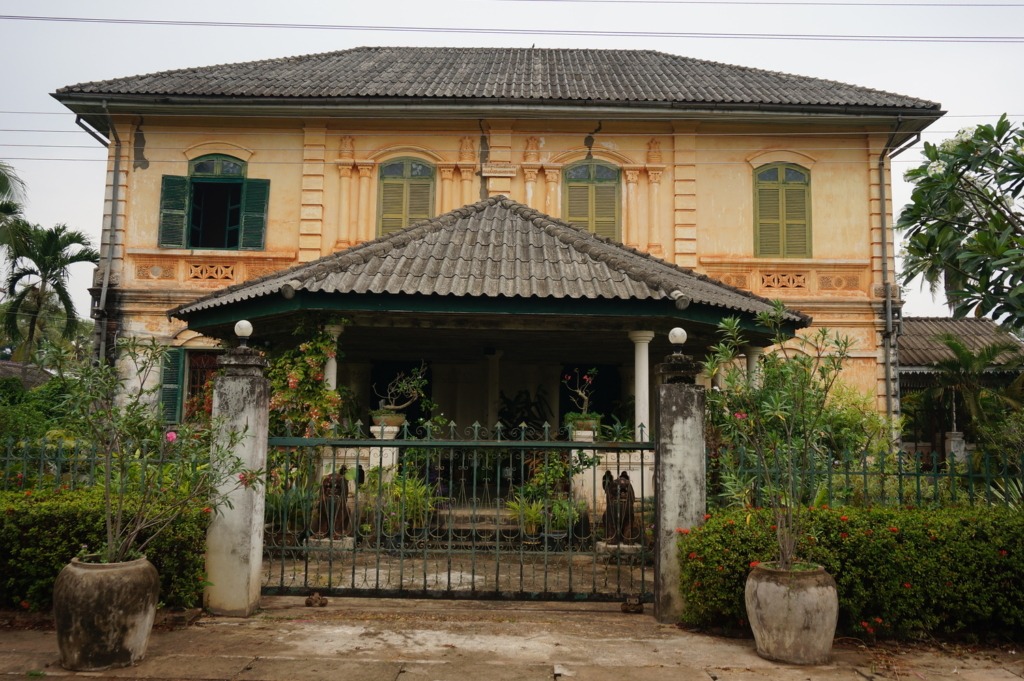 We spent the first night in Khamphouy guesthouse, where a double room with fan cost us LAK 80000. It was good value for the price, and the convenient location meant that there were several restaurants within walking distance.

We spent four nights at The river view (aka Khaim Khong), as it was discounted on Booking.com. For €11 per night, we got a beautiful double room with fan. While the room was small, it was very tastefully decorated; however, the main interest there was the location. It’s located slightly outside Champasak itself, along the river, offering a beautiful view on the Don Daeng island. There are only 20 rooms, so it was extremely quiet and didn’t feel crowded at all.

The only drawback of the Khaim Khong was its location. As the resort’s restaurant was very deceiving, it’s much more interesting to eat in one of Champasak’s great restaurants. Unfortunately, if you don’t have your own wheels it will take a long time, as the closest restaurant is 2 kilometers away. However, bicycles are provided so it’s not a huge deal. We also had lunch once in a small place nearby and it was good.

Overall, Khaim Khong was the perfect place to relax and we enjoyed our stay there enormously.

Two unnamed places are worth stopping at. The first is a drink stall right in front of the Khamphouy guesthouse, selling excellent drinks. The second one is actually a few kilometers away from Champasak, on the road leading to Wat Phu. After passing a sign for “Cozy House Front of Mekong (Half-board)”, there’s a bridge crossing a river. Right before the bridge is a small stall selling the best banana pancakes we’ve had in Asia. Make yourself a favor and stop there on the way to Wat Phu !

For dinner we went to Champasak with love; they offer a large menu of reasonably-prices dishes, and quality is good. But the best part is the setting, overlooking the river.

The restaurant of Inthira hotel is excellent, and prices are reasonable. It’s located inside a beautiful colonial house, and apart from the music (sigh) it’s as close to perfection as possible. Their breakfast was excellent; for LAK 30000, we got a coffee or tea, plus excellent home-made bread and equally excellent home-made jam (mango, pineapple, tamarind and passion fruit). Dinner was just as great; there’s both Western and Asian dishes, including an excellent larb. The menu also features imported French cheese, and it was hard to resist the temptation !

Food at Nakorn cafe was also excellent. Thanh took a vegetarian larb with mushroom, while I had curried fried noodles; we loved both of these.

We usually aren’t too keen on visiting temples, but we thought that without the touristic crowd, we may actually enjoy this one. The first time we went there, it rained so we gave up and came back to the hotel. The next day, the weather was sunny, and we gave it another try. We absolutely didn’t regret it, as we totally enjoyed our visit !

This impressive site is located less than 10 kilometers away from Champasak. The road leading there made for a very nice ride, as it was lined up with wooden houses and we could enjoy the beautiful countryside in Laos.

Entrance ticket was LAK 50000 (around €5). We strongly advise you to visit Wat Phu early in the morning, as there’s little shade and the visit involves climbing steep stairs !

After a quick transit on an electric shuttle bus, the first thing we saw was the picturesque way leading to two large temples. 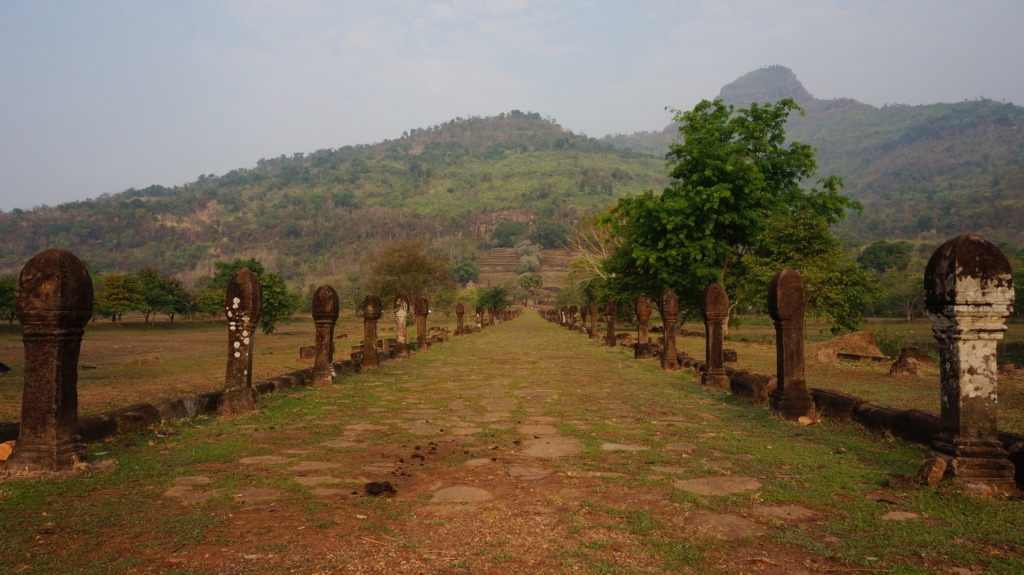 The temples are massive, beautiful structures; their bright colours were especially beautiful in the early morning. We took our time to appreciate them, as the serious things began shortly afterwards 🙂 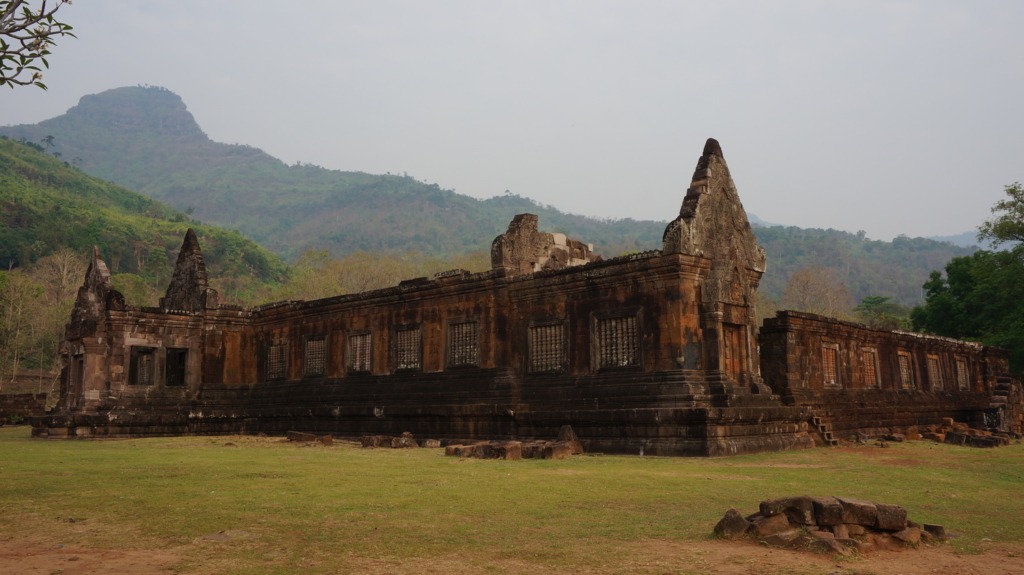 Indeed, we had to climb huge, uneven and very steep stair. But the incredible beauty of the site made it totally worthwhile. Terrific-looking trees with tortured shapes added to the beauty of this place, and the surrounding ruins made it one of the most picturesque places I ever visited. 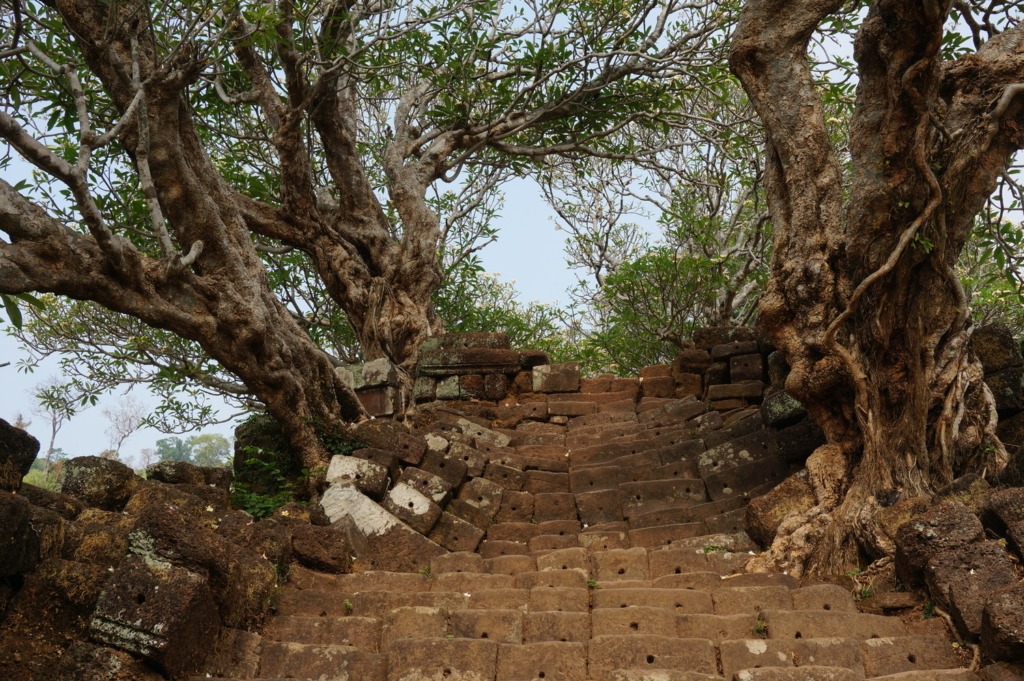 Once at the top, we were rewarded by the sight of a temple featuring extremely detailed sculptures. The temple is apparently still in activity as many offerings were laid on the floor. 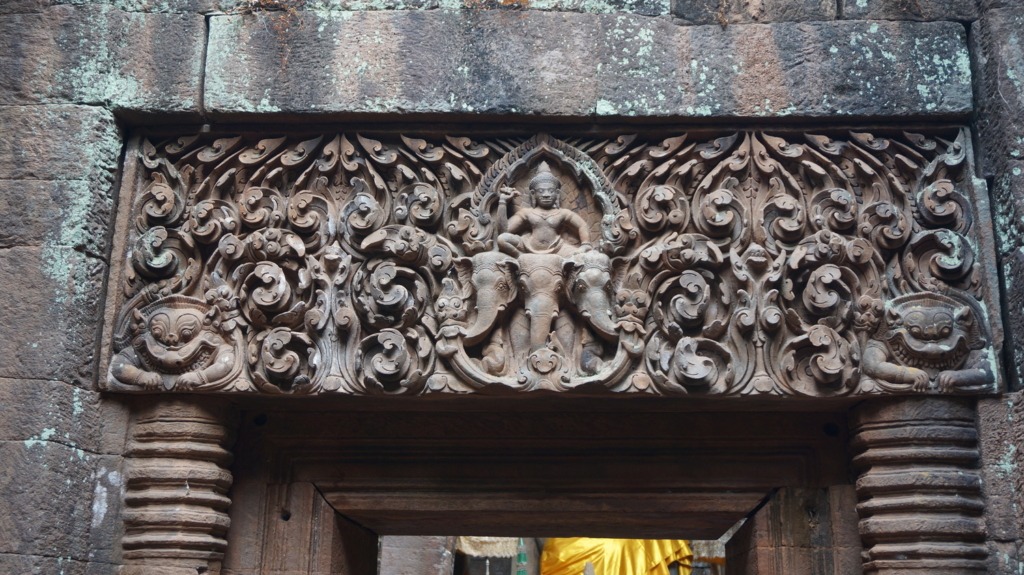 There’s also another temple named Hong Nang Sida on the site. It’s about one kilometers from the two main temples; currently it’s barely more than a heap of rocks. 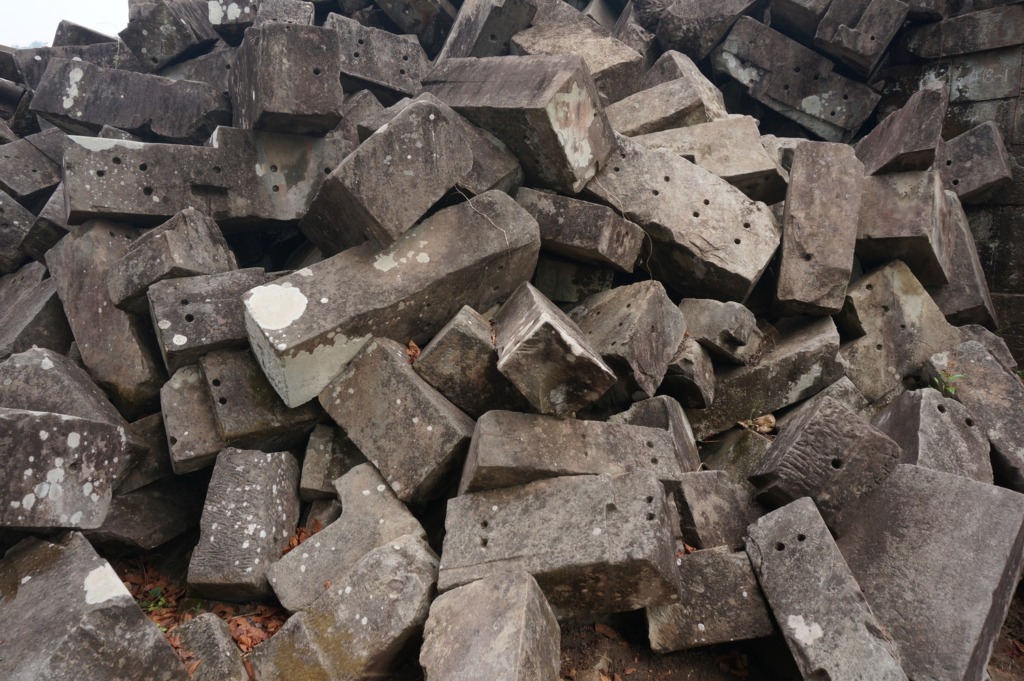 This large island on the Mekong faces Champassak. Reaching it is possible from two piers; the first is located North of Champasak, while the other is located on the road to Wat Phu.

The boat trip was an experience by itself. One guy carried a piglet and a plastic bag containing a snake, while a family brought a fridge. It cost us LAK 40000 one way, including the bicycles.

Once we reached the island, we had to push the bicycle on a large sandy beach before reaching a dirt road. There was basically just one road circling the island, so it was hard to get lost there ! 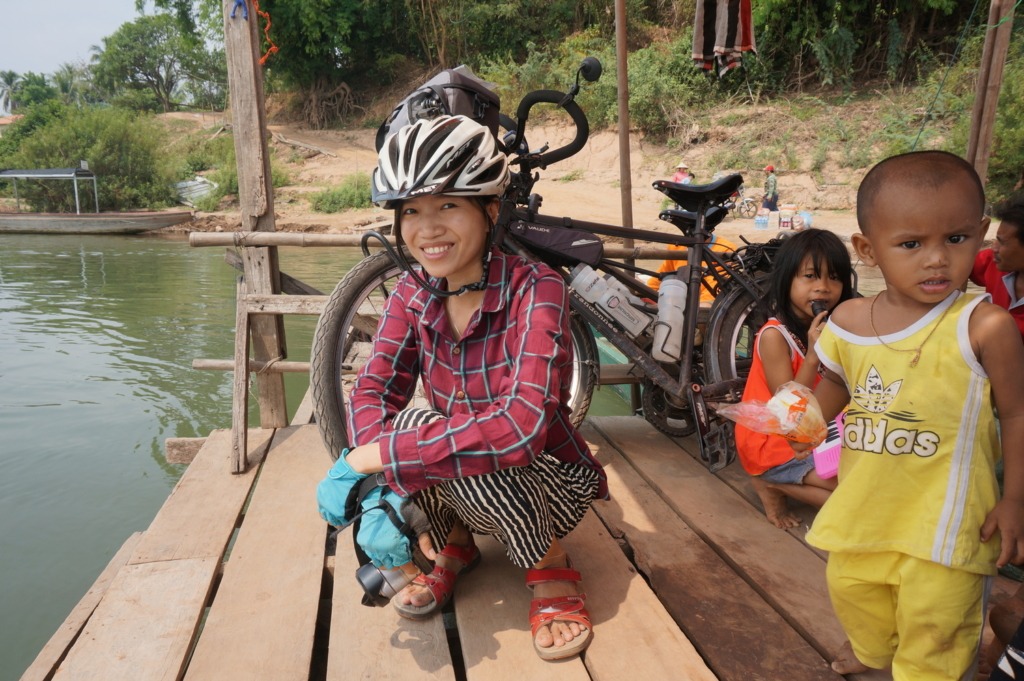 While the landscape wasn’t exactly impressive, the villages and views of the Mekong were beautiful. There were few opportunities for food on the island. We had lunch at Coffee Mee, located at the North of the island. Their version of som tam was the most colorful I ever saw, and tasty as well ! 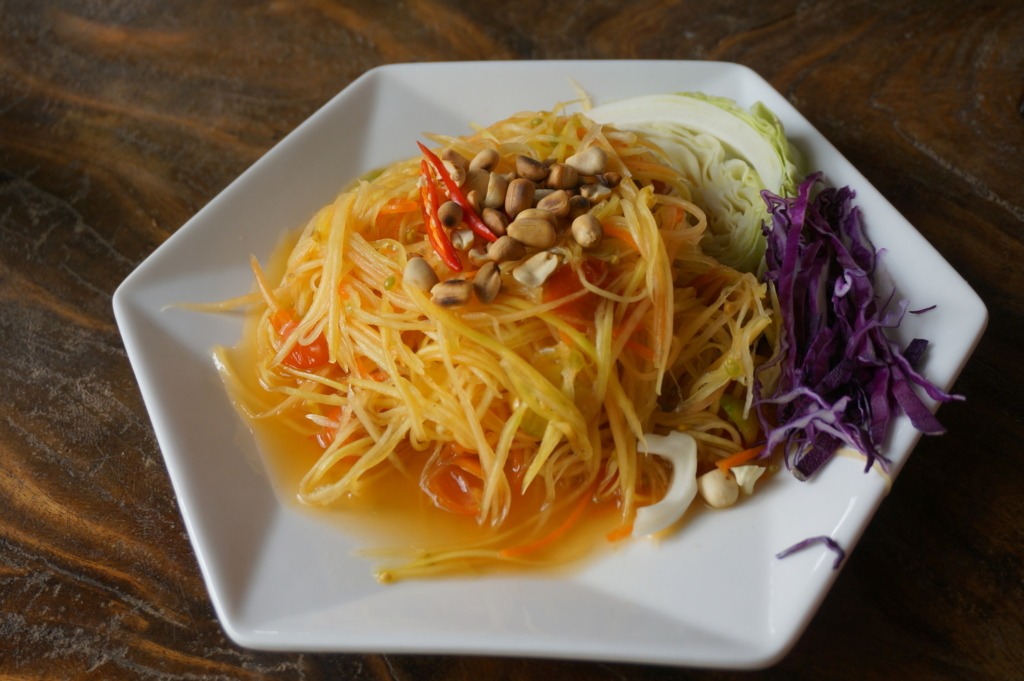 There’s a large sandy beach, also located at the top of the island. This is where we caught a boat to return to Champasak. It was honestly a bit painful to find a boat, as it was not organized and the temperature was crazy. We didn’t ask the price and once we arrived, were asked for a crazy LAK100 000 (around 10€). Well, next time we’ll bargain before boarding !