Vietnam’s central highlands were our next destination after visiting Hoi An and it’s surroundings.

From Hoi An to Kon Tum, the cycling distance was around 330km. It can be divided in three parts. First, a mostly flat ride lead us to the foothills of the mountains, in Ha Nha. From there we started climbing in order to reach Dak Glei, our first stop in the central highlands. Finally, we reached Kontum after a much flatter ride.

Hoi An to Ha Nha

We left Hoi An on the muddy DT608, and after less than 10 kilometers reached the infamous QL1. We followed it for a few kilometers until we reached Nam Phuoc where we turned right on the DT610. This large city provided many opportunities to buy food.

After leaving Nam Phuoc, the DT610 turned out to be a very pleasant road. The road surface was great and we were surrounded by fields. It’s too bad the weather was threatening.

The Cham sanctuary of My Son was supposed to be one of the highlights of this area. Unfortunately, it started raining heavily as we arrived there. After waiting a bit for the rain to stop, we decided to visit it anyway. Unfortunately, the rain made it a very unpleasant experience, and we ended up preferring the small but beautiful ruins of Chien Dan Cham.

We then headed North and after passing a very long bridge, we quickly reached the suburbs of Ai Nghia where we found a very pleasant motel for the night.

The next day, we headed West on DT609 in order to reach the quiet QL14B. It was a pleasant morning in the countryside, and we reached An Nha around lunch time.

Ha Nha to Thanh My : warming up our legs

After Ha Nha, the roads slowly started climbing… and the slope got much steeper as we approached Thanh My, our stop for the night ! The landscape was nice but the riding conditions were unpleasant. We got overtaken by many trucks honking like mad and didn’t feel very safe.

Our stop for the night, the small city of Thanh My, was a bit depressing. The main street, parallel to the QL14, was muddy. People seemed very lethargic and totally bored. Our motel was very cheap (150kd) but unfortunately we slept badly as the water pump was very noisy.

Thanh My to Kham Duc : rain, rain and more rain

Fortunately our opinion on Thanh My improved the next day. The bakery located at the crossing between QL14 and the main street provided excellent banh mi. We also discovered a very pleasant café (Ca Phe Thuy Tam Vien) which is located on the right side of the QL14, maybe one kilometer after the bakery while heading North.

As we left Thanh My, the weather was threatening again but still dry. There was a lot of mist over the mountains, making the dense vegetation look even more impressive ! Unfortunately as we rode the weather worsened and it started raining heavily. We stopped for a break on a small roadside café. The other side of the river looked rather stunning. 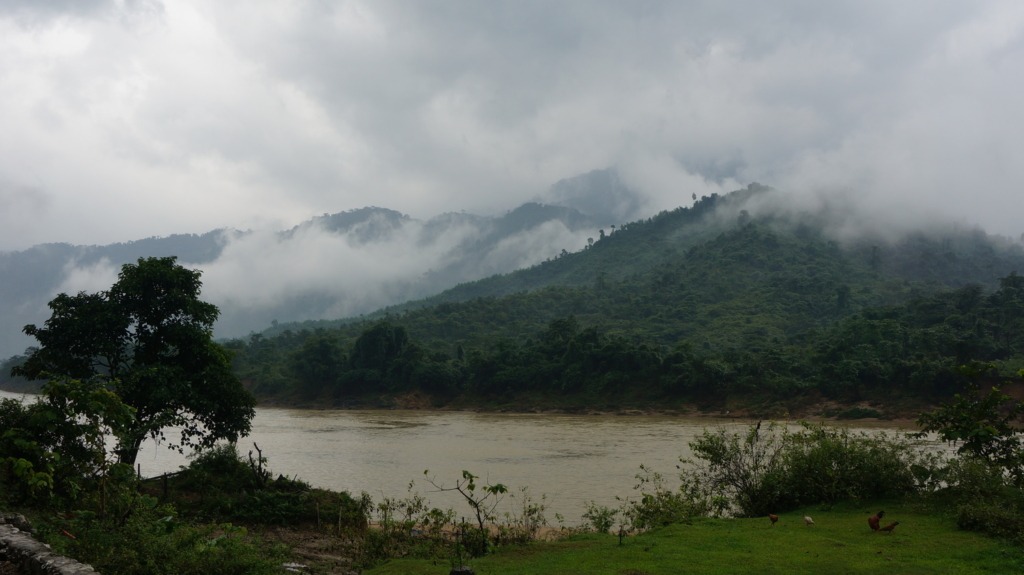 As the rain didn’t seem to want to stop, we decided to keep going. The road kept on climbing gently along the river, and while the landscape was still very beautiful, the heavy rain made this ride much less pleasant than it could have been. 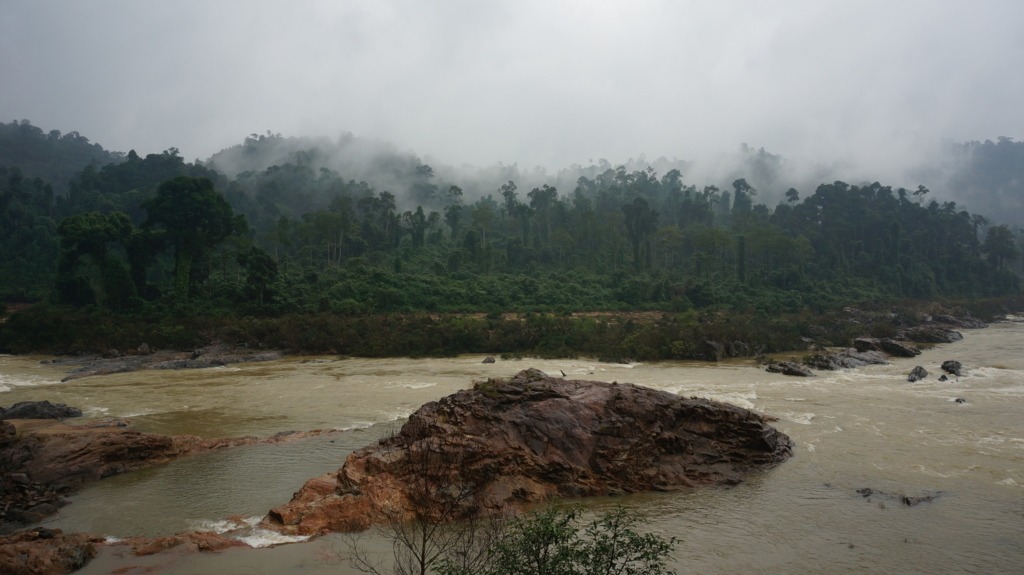 We stopped for lunch in a large restaurant facing a waterfall, and started pedaling again under the rain. The last kilometers to Kham Duc were absolutely unpleasant : in addition to the heavy rain, there was a long climb to reach the city. After the crappy sleep from the previous night, we decided to stay in a hotel rather than a guesthouse. We paid 200kD for a clean, large windowless room. It was a pleasure to take off our wet clothes and take a shower !

As the weather forecast for the next day didn’t give us any hope of improvement, we decided to spend one day in Kham Duc. While this city was less depressing than Thanh My, it was mostly desert and the few people we met seemed totally bored.

The next day, we woke up to a much better weather. It gave us a morale boost, which was welcome as the ride to Dak Glei promised to be tough with a long part made of 10% slopes… Ouch ! However, the first half of the ride was rather easy, and we climbed at a moderate pace, surrounded by nice landscapes. We came across a burned down bus, a striking reminder of how dangerously Vietnamese people drive. 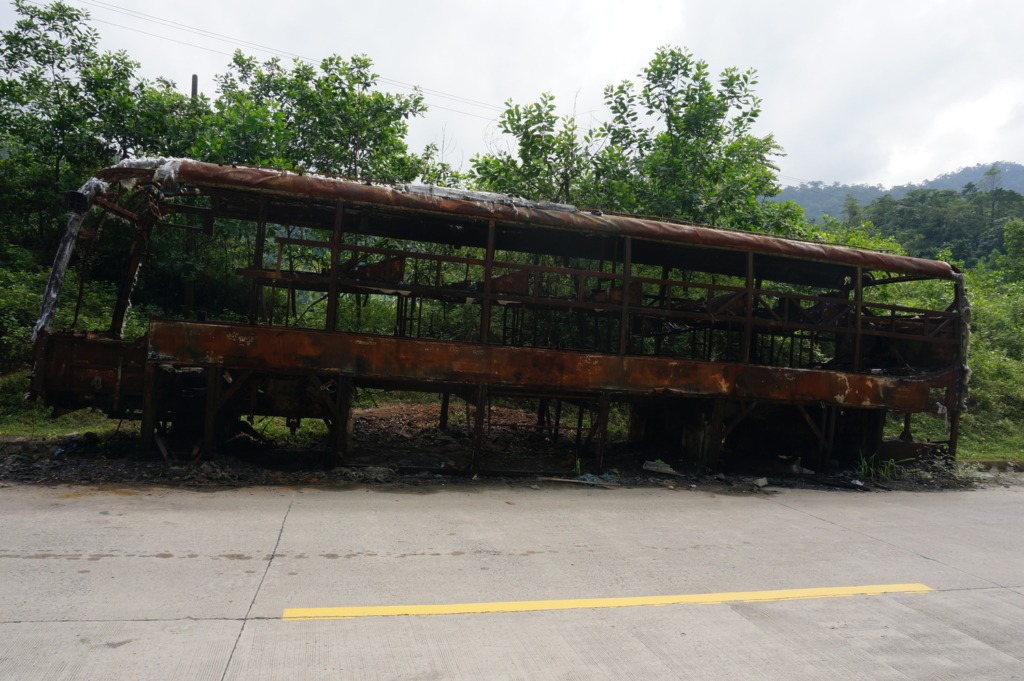 The road markers on the side of the road indicated a city 30km from Kham Duc, which was right before the serious things would begin. I was already picturing myself drinking a nice ice coffee there… alas, this place never materialized and we had to start the serious climbing. The central highlands were waiting for us ! 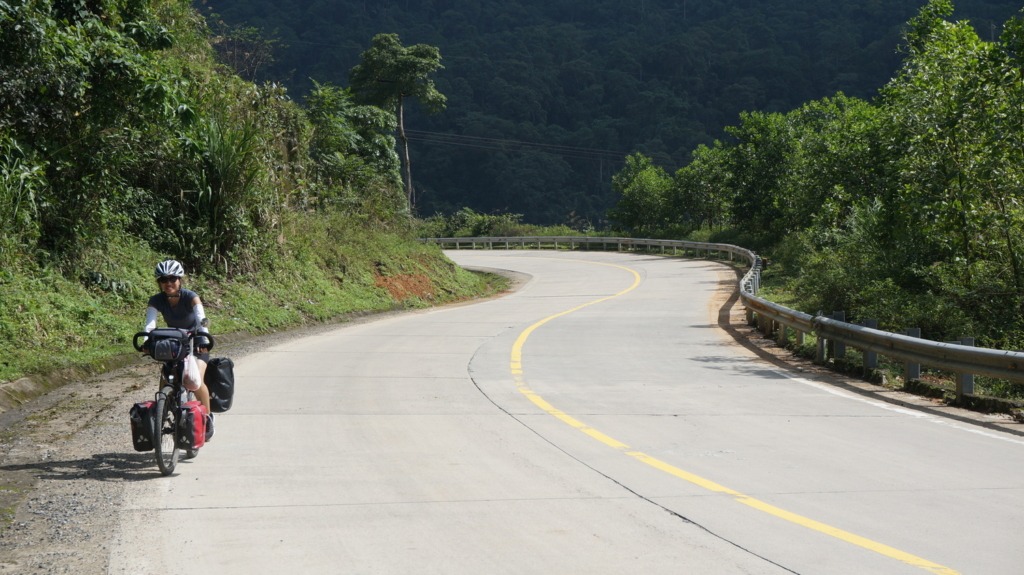 Let’s face it, we suffered a lot. Climbing such steep slopes with loaded touring bicycles meant stopping often, sometimes after only 100 meters. And every time we looked above us, we saw that the road still lead higher. While we only reached an altitude of around 1000 meters, it was an exhausting effort. At the top of the mountain, what struck me was the color of the sky in front of us. While it was gray everywhere else, it was a striking blue in the direction of the highlands. Finally !

We filled our water bottles at a gas station, and started going down. Unfortunately it wasn’t such an exhilarating downhill as expected. The road quality was average, there were many improvement works underway, and many trucks driving dangerously now that they could go down at full speed. And our suffering wasn’t over yet… The road quickly started climbing again, and we were getting a bit concerned about having to ride in the dark. Fortunately this second climb didn’t last long and we finally reached Dak Glei after 10 more kilometers. We found an hotel room at the usual price, had a quick dinner, and went to bed before 9pm as we were totally exhausted

Dak Glei to Kon Tum : riding in the central highlands

The landscape in the central highlands was very different from what we saw during the previous days. We were surrounded by bright forests; most of them seemed rather recent, probably planted after everything was cut down. 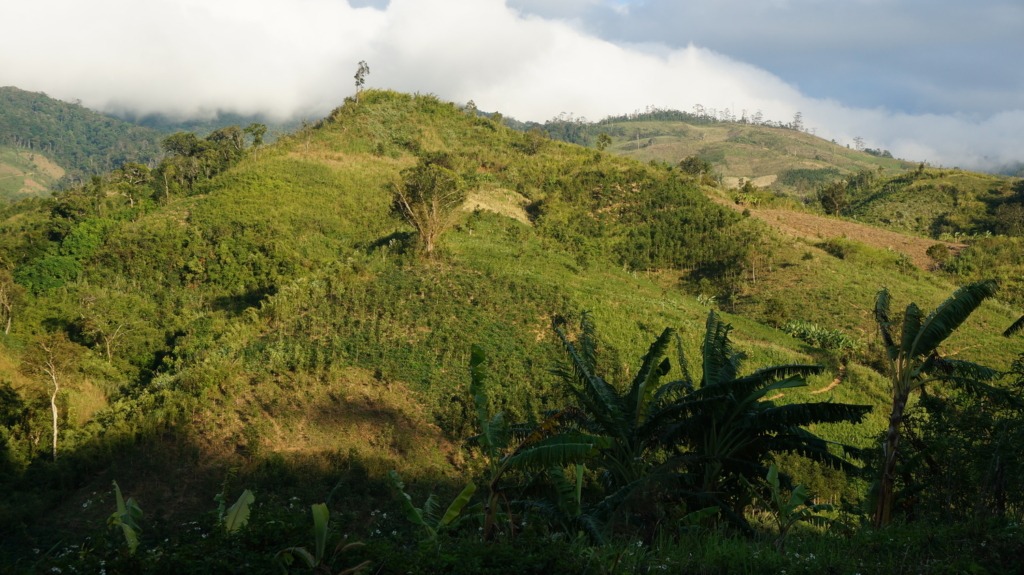 Vietnam’s central highlands are praised for their coffee, and we indeed saw a lot of it, either in the fields or drying in front of houses. 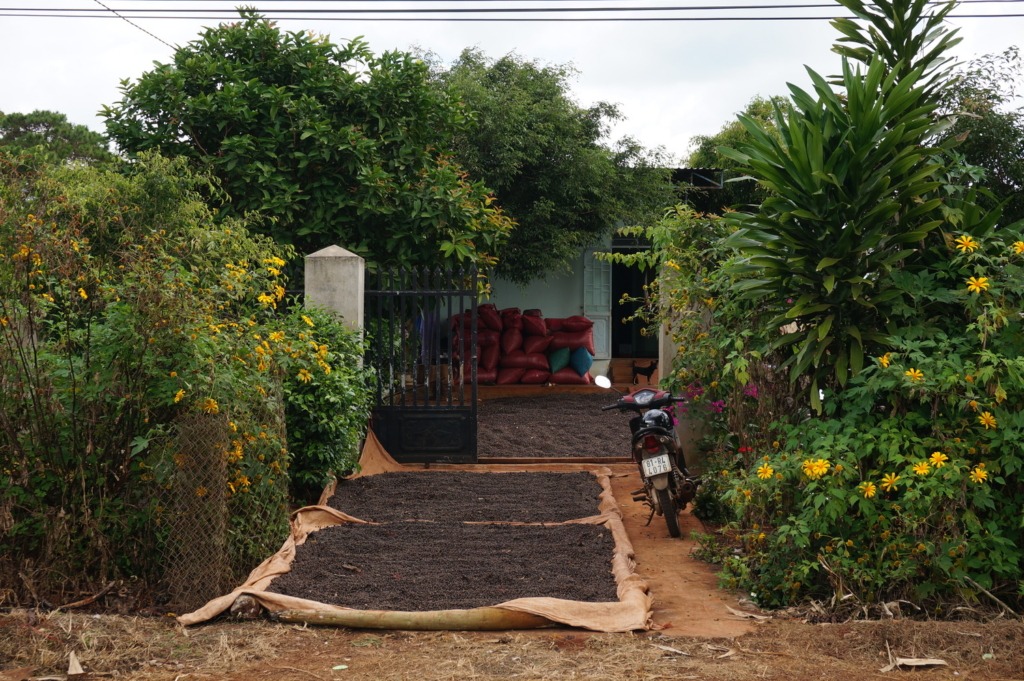 The ride from Dak Glei to Plei Clan, close to the Laos border, was pleasant. The blue sky made us happy, and so did the high temperatures ! There was little traffic and we rode through many small villages. Like many large cities in Vietnam, Plei Can didn’t have any charm. As we checked in at another boring hotel, we were impatient to arrive in Kon Tum the next day !

The last part of our ride took us through Dak To, where we saw a traditional house. 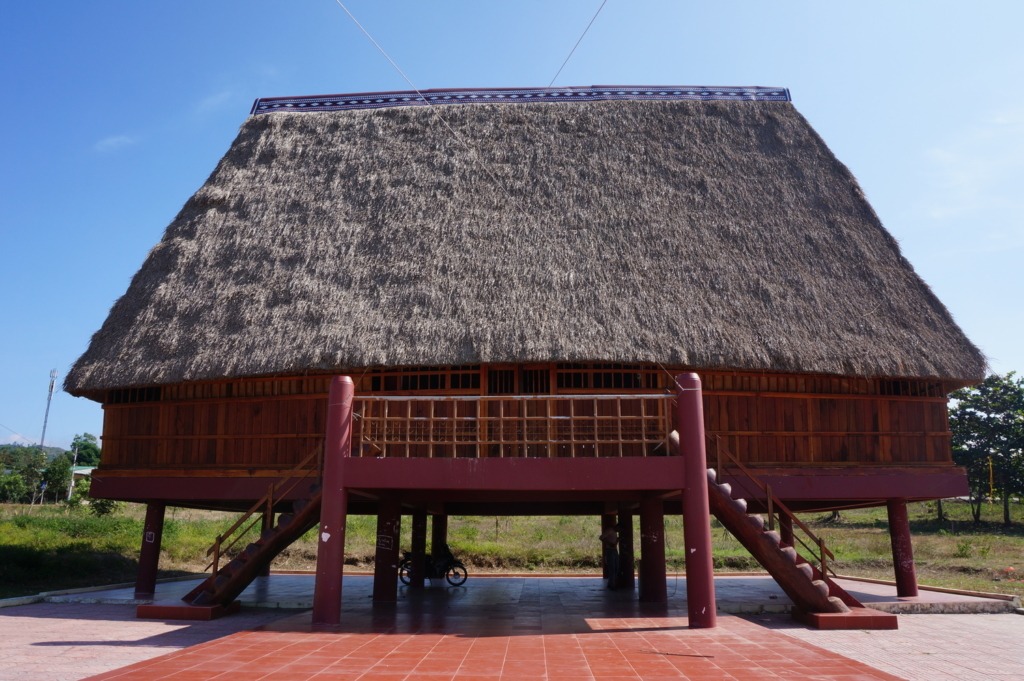 The final part of our ride to Kontum was also the worst. After Dak To, traffic became very noisy and dangerous. We got overtaken by countless cars, trucks, buses and vans, all of then honking like mad… It was not the ideal way to reach Kontum, but at least we finally got there !

Our plans for the next days ? A rest day in Kontum, and then explore the central highlands around Pleiku.

You can find the detailed itinerary on Openrunner