Cam Lap promontory is a little-known area south of Nha Trang. I saw a few strikingly beautiful pictures of this place on Vietnam Coracle’s website. However, after the destructions cause by a typhoon at Diep Son and Doc Let‘s fiasco, we were a bit concerned about what we’d find. Moreover, as reaching this place seemed to require some steep climbing, we hoped that these efforts wouldn’t be in vain !

We decided to cycle a short distance first, by stopping for the night in the coastal city of Cam Ranh. While it’s located on QL1, it’s possible to avoid most of this road by taking the road 657I which follows the coast. The road itself was great, but there was a lot of traffic, mostly buses and vans heading to Cam Ranh’s airport located at the end of the road.

The start of the ride wasn’t very interesting; we passed one golf and a large resort called the Diamond Bay resort. There was even some advertising for a past Miss universe competition ! The scenery then improved as the road started climbing, and there was a nice viewpoint at the top. I finally started to have some hope again regarding the next days’ scenery !

The road then went downhill, and we reached an area where many huge resorts were being build, just North of the airport. It was a strange place, with all this building activity taking place in the middle of nowhere ! We stopped for a refreshing drink in a crappy little roadside café, then reached the airport and the QL1 a few kilometers further.

Plenty of restaurants and motels lined the QL1 in Cam Ranh; however, we preferred to find a more quiet place to eat and sleep so we started exploring the city. It took us a long time to find an accommodation there; we ended up paying VND 300 000 for a rather great room at Hotel Bao Ngoc. All room were built around a courtyard, with small trees sheltering tables and chairs from the sun. There, we ate the bánh mi we had brought in Nha Trang, and spent the afternoon in a nice café (Windows café, 42 Điện Biên Phủ, Cam Linh, Cam Ranh).

After having some xôi for breakfast, we started cycling on QL1. It was a pleasantly surprising ride : the scenery was okay and there was little traffic. After 14km we turned left on road 702, cycling in the middle of ride paddies. There was some wind but it was very pleasant. After a few more kilometers we faced what looked like a long climb ahead of us; however it turned out that we had to turn left there in order to reach Cam Lap promontory.

And guess what ? This road there seemed even steeper than the other one. While the climb wasn’t long, it was very steep and I quickly found myself out of breath. We eventually reached the top but it took us some great effort ! The road was narrow, and we were surrounded by high hills. Most had many large boulders on their sides – the same kind of boulders that we hoped to see in the surrounding beaches –

We rode a few more kilometers and quickly reached the village of Binh Lap. We decide to look for accommodations first, in order to leave our bicycle bags there. This would allow us to travel more easily in case the crazy climbing continued !

The Dao Hoa Vang homestay offers rooms, dorm beds and tents. It’s located a few hundred meters outside Binh Lap on the Eastern side of the promontory. The staff was friendly and one person even spoke English.

We chose to stay in a double room, costing VND 400 000. While it’s obviously more expensive than most places we stayed at, the room was great and we had access to a beautiful beach. 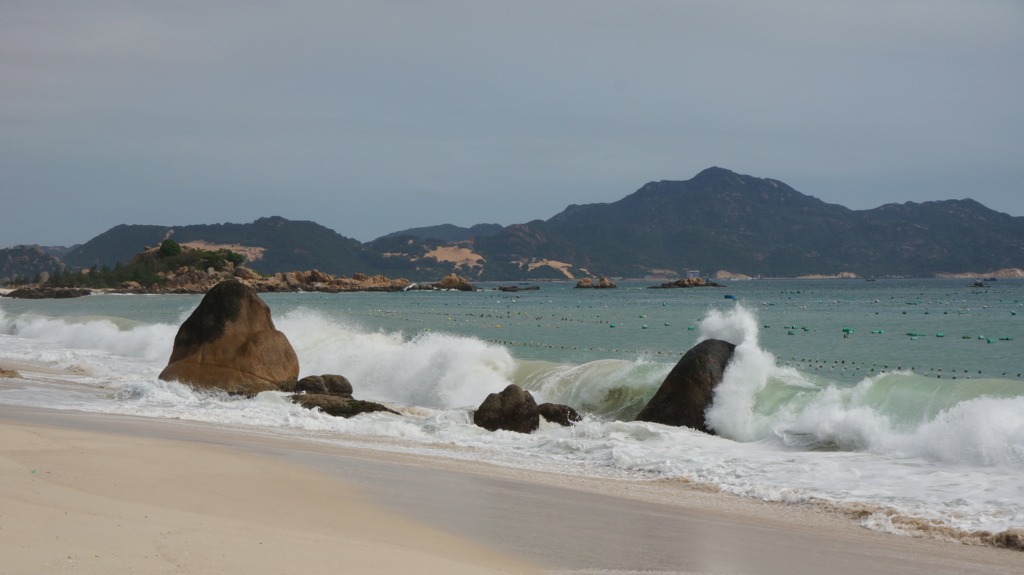 We had one dinner at the homestay’s restaurant. Food was simple but great; we had a great time, listening to the sound of the waves. Later we spent some time on the lounge chairs, watching the stars and the extremely bright full moon… it was a very peaceful moment, a wonderful way to end one of our best days in Vietnam !

The next day, we bought bánh mì for breakfast and brought them to the homestay. We had plans to enjoy the beach during the morning… unfortunately there was some work taking place in the restaurant area and it was noisy.

Binh Lap is a rather small and quiet village. There’s a harbor on the Western part of the city, with an impressive view of the large boulders we already noticed earlier. As in many coastal areas in Vietnam, trash is a large concern there.

We saw several restaurants but most seemed to be closed; we guessed that they would open later this year, once the touristic season would begin. As usual, we ended up eating in the street or in small restaurants. Two places served bánh mì, while one small restaurant had rice porridge with duck – but you have to show up early, otherwise it will be gone –

There’s a café located on the left side of the road as you reach Binh Lap. They can serve you instant noodles for next to nothing (we paid VND 20 000 for two), which may be useful if you want to eat at a unusual time or are on a budget.

Please note that there’s no ATM in the village, so bring enough cash before arriving !

There’s a small road heading to this resort, which is located on the Northern part of Cam Lap promontory. Follow the signs at the fork in the road, right before entering Binh Lap. The start of the road was very bumpy but it quickly improved.

We had the opportunity to stop for pictures as there are accessible beaches nearby… and it felt good to finally see some beautiful coastal scenery in Vietnam ! The large boulders in the sea were very picturesque, and the water color was beautiful. Moreover, there was nearly no trash on this part of the sea, which was surprising as it’s used by locals to access the lobster farms located a bit further. 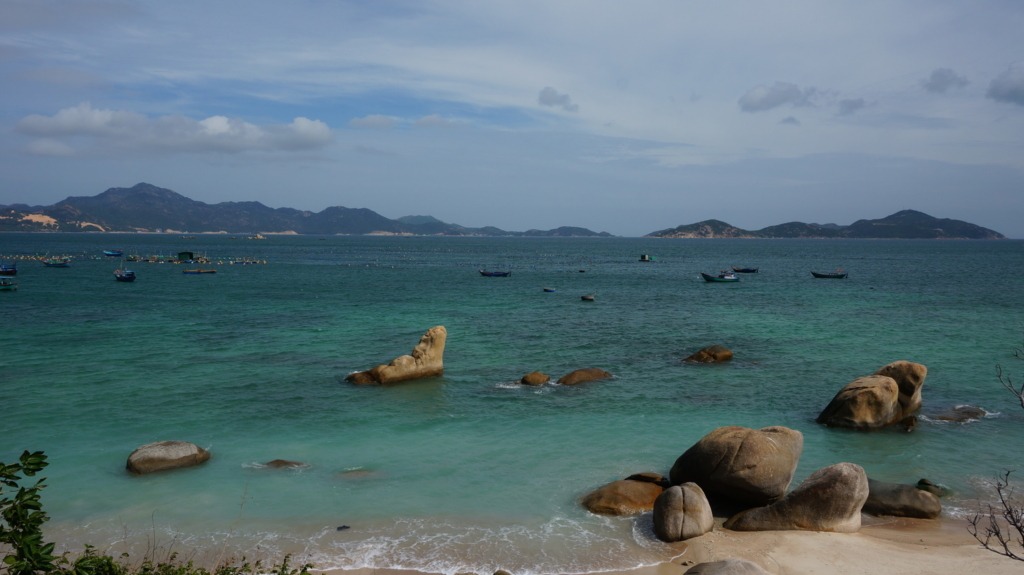 After less than 2 kilometers we reached the entrance of the Ngoc Suong resort. The entrance fee for visitors is VND 50 000; we paid the guard and started cycling down the small road leading to the beach. And what a beach ! It was strikingly beautiful. The boulders there were huge, a really impressive sight ! 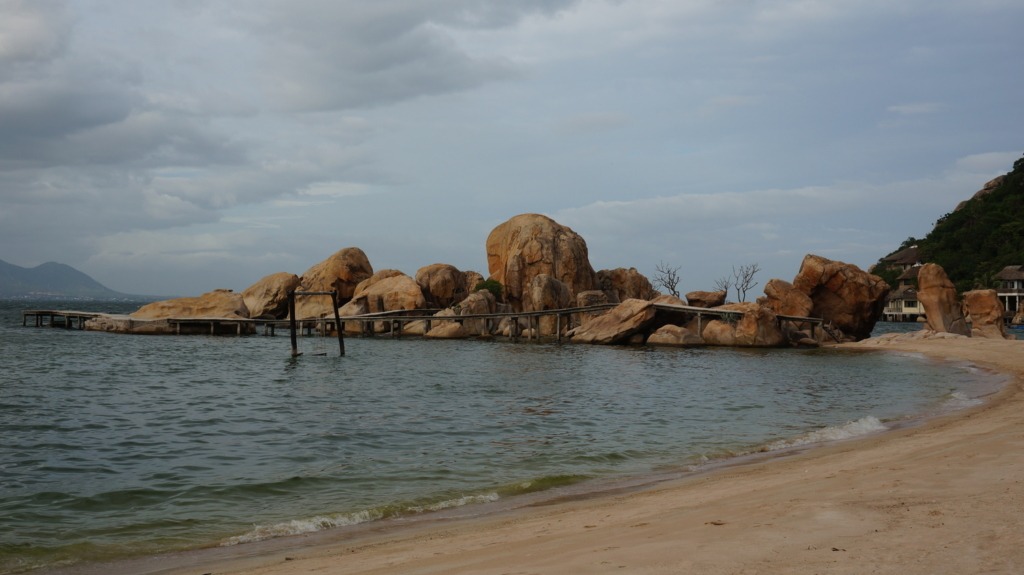 On the rightmost part of the beach (where the rooms are located), there scenery is equally beautiful. We saw several couples who came to take wedding pictures there. Overall the resort was very beautiful, far from the mass of concrete too often found elsewhere ! 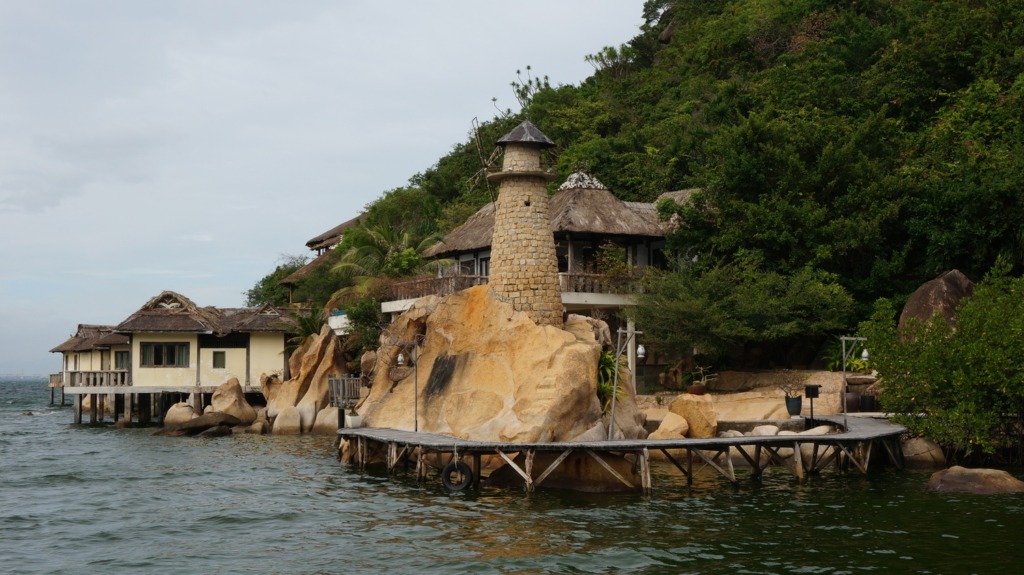 We spent some time enjoying a cold drink on the pontoon. While it was pricey, the extremely scenic surroundings more than compensated this ! 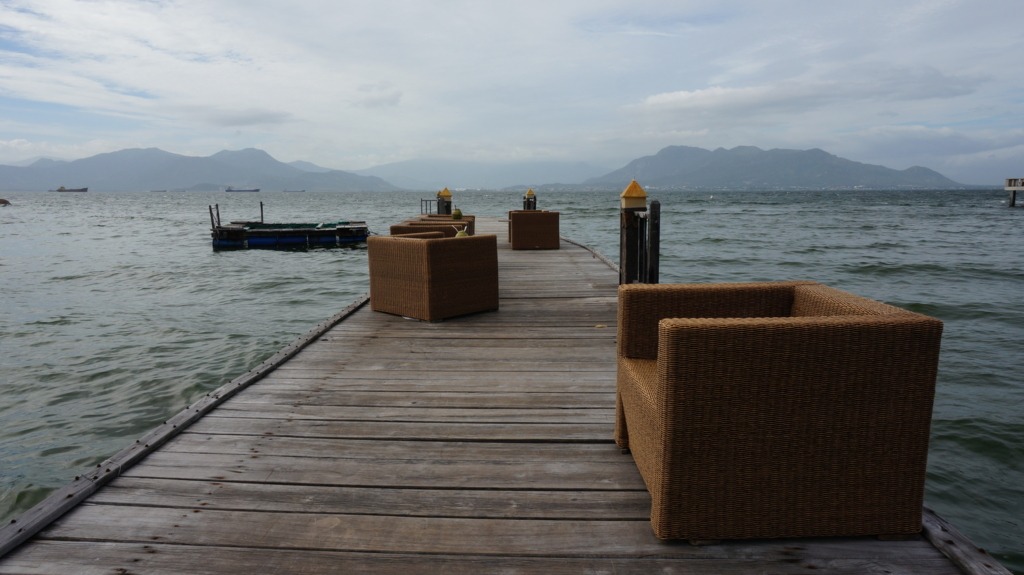 The only drawback of Ngoc Suong resort was the buses full of visitors who came to take pictures. It’s obviously a great business for the resort, but large groups of tourists kind of mess up the peaceful atmosphere !

After a few more pictures in the late afternoon sun, we visited the tiny village at the Northern part of the promontory. It looked like a very poor place, in spite of the flourishing lobster farming business.

Cam Lap promontory’s other resort is easily accessible from Binh Lap. It took us a few minutes by foot. After climbing a steep but short road, we quickly reached the resort. The entrance fee for visitors was VND 50 000, just like Ngoc Suong. We had to go down very steep stairs in order to access the beach.

Note that as often in Vietnam, the only use for bicycles seems to be decoration, not transportation 🙁 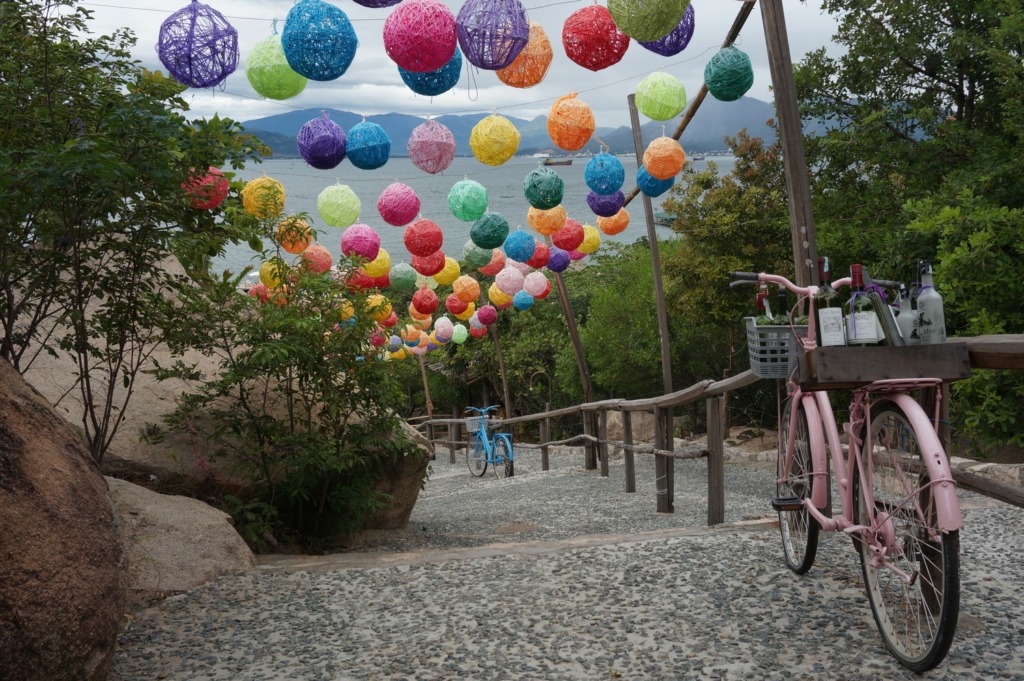 While the scenery is less spectacular than at Ngoc Suong, Sao Bien is nicely decorated. 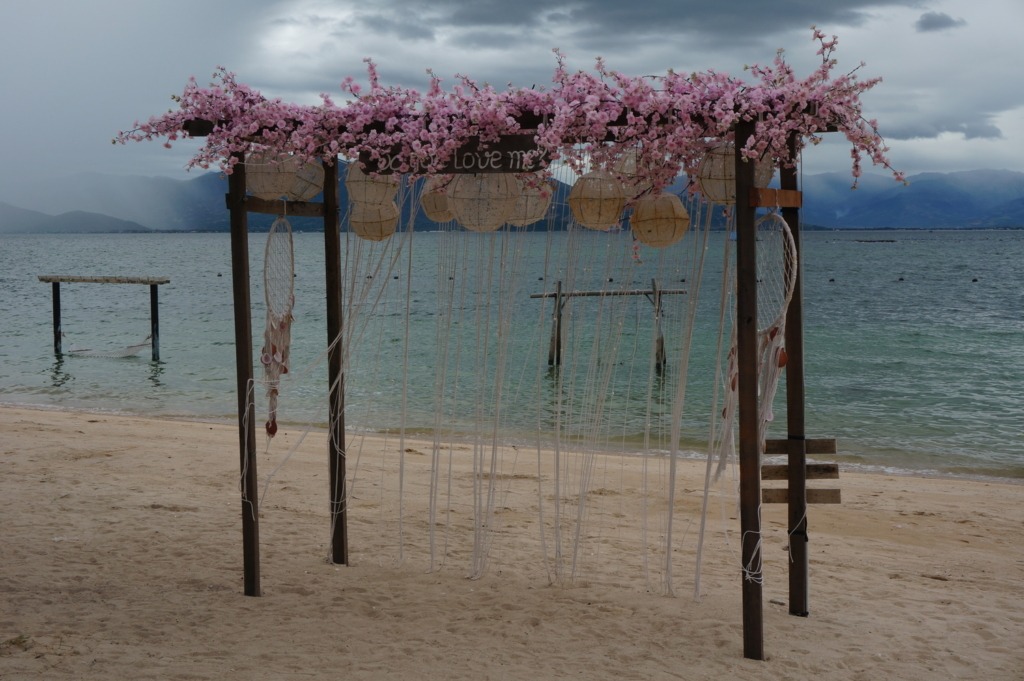 There were cocktails on the menu, but unfortunately the bartender wasn’t there so we couldn’t get any. Crap. Needless to say I ended up drinking yet another cà phê sūa đá Sài Gòn !

Is Cam Lap promontory worth the effort required to reach it ?

In spite of the painful climb towards Binh Lap, we totally enjoyed our stay in Cam Lap promontory. Dao Hoa Vang homestay was a great place to stay, especially considering the nice beach we had access to. Paying a small entrance fee at the resorts was not a big deal, thanks to the gorgeous location at Ngoc Suong resort and the nice decoration at Sao Bien resort.

During these two days, the remoteness of Binh Lap gave us the feeling we were staying in an island… the kind of place where you just feel good and don’t want to leave.