We spent a lot of time considering the topic of bicycle touring gear. Most travelers probably bring too much, and we probably won’t be an exception !

I bought my touring bike at the French shop Cyclo-randonnee; it’s the 2013 model of the one shown here. Most people buy theirs from Fahrrad Manufaktur, a brand famous for its reliability. However, I don’t like doing thing like everybody else, so I choose this one instead 🙂

After some hesitation due the the high price, I decided to pick up the model equipped with a Rohlhof speedhub. I’m not good at mechanics and gears troubles have ruined the fun during a previous trip using an entry-range mountain bike, so I went the easy (and expensive) way. One impressive aspect of this speedhub is how “smooth” it feels to ride the bicycle, compared to derailleurs. 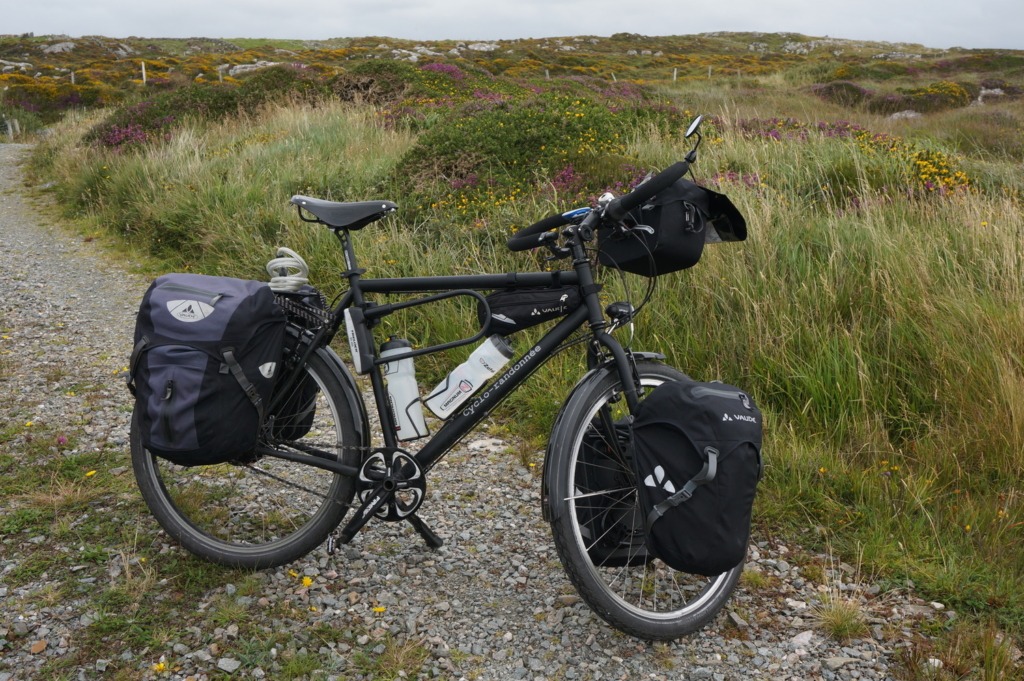 In a more classical way, Thanh choose the Fahrrad Manufaktur TX-400. The main reasons for her choice were the availability of a step-through frame, and the opportunity to test-ride the bicycle before buying it.

Ortlieb and Vaude are the two most famous brands for bicycle panniers, but of course there are plenty of other brands offering you ways to organize your bicycle touring gear.

We both have front and back panniers from Vaude. Having four panniers each is necessary to pack all our stuff. My model is an old Discover Pro, while Thanh has new Aqua panniers. This is rather classical; however, for our handlebar bags, we chose a relatively recent model : Ultima from Klickfix. Thanh used it during our trip in Ireland last year and loved them. I grew jealous of their volume and usability, so I decided to also buy one to replace my old Discover Box from Vaude. 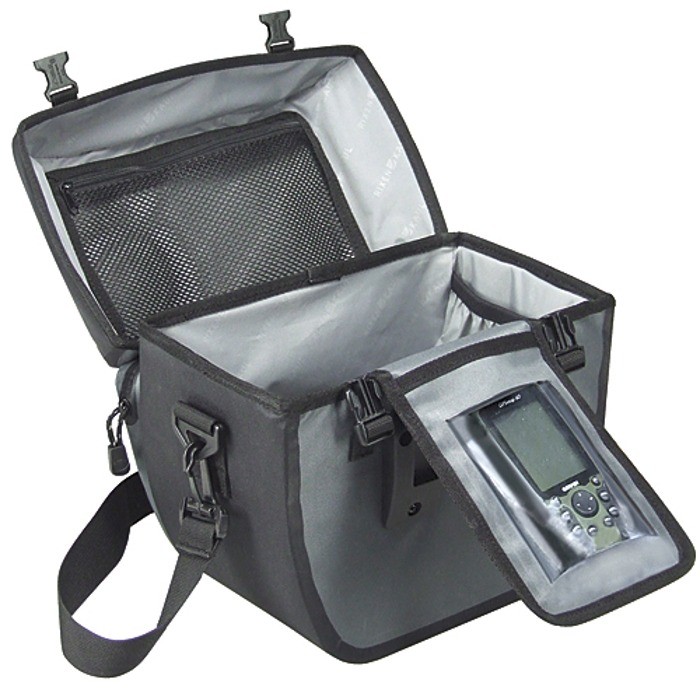 Tools are an essential part of your bicycle touring gear. Remember, shit can and will happen 🙁 Thus, In addition to spare parts, I brought many bicycle repair tools… and I have no idea about how to use most of them. As I actually have two left hands, I would prefer to leave bicycle maintenance and repair to a qualified professional (or even an enlightened amateur), but we may find ourselves stuck in the middle of nowhere with an out-of-order bicycle, forcing me to definitely destroy it accidentally fix it myself. (if I can get some 3G when it happens, I may at least find some YouTube tutorial…)

As a side note, I absolutely hate multi-tools. Granted, they’re light and compact, but I found that even when buying from a reputable brand, they’ll have a tendency to wear out very quickly. As a result, I prefer to bring separate, standard tools. Tinkering my bicycle is already annoying enough not to make it worse by using upsetting tools !

I just love my Sony Nex-6 camera (replaced by the Alpha 6000, as brands love to do useless changes often). The colors are extremely vivid, and it’s very easy to use – although as often with Sony, the menus could be improved – . I mostly use the original lens (18-55 if I remember well), but I also have a fixed-focal lens.

As I love reading, the creation of the Kindle by amazon delighted me. To be frank, I was a bit skeptical at first, but the reading comfort turned out to be great. I can finally bring all my books everywhere I go ! I only wish George RR Martin could finish the next Game of thrones book before I forget everything about the previous ones and have to read a few thousand pages again 🙂

My MP3 player is an old Cowon Z2. I love its sound quality, which compensates the occasional glitches and error messages I encounter ! At home I always have some music on, but listening with earphones or headphones really can’t compare with playing on a quality sound system. I’m curious how often I’ll listen to music while traveling !

Finally, my laptop is a Dell XPS13 running Linux. I hate working on a laptop but will have to get used to it !

The good thing about going to Asia is that most of the time, we won’t need to bring heavy, warm clothes. Heat and rain will be much greater concerns than cold !

One main criteria for our riding clothes was their ability to dry quickly. Not only because of the rain, but also because we’ll need to wash them daily : both dust and mud will stain them quickly, and the high temperatures means we’ll sweat a lot 🙁

As time goes by, I’ve come to appreciate wearing sandals more and more. My favorite model was the Keen Canyon, but unfortunately mine broke down and I found out that they got discontinued. I now wear the Newport H2, also by Keen, but I find them a bit less comfortable.

While riding, I use the Keen Commuter sandals with my SPD pedals. SPD pedals are great when climbing, however I don’t always feel safe in the cities, when my sandals are clipped to the pedal and there are motorcycles and cars riding in an anarchic fashion all around me !

I could probably manage to wear only the SPD sandals, but when the ground is slippery, the metal part at the bottom can lead to nasty slips. Of course, the drawback of having two pairs of sandals is that I’ll have to put one pair inside my panniers, which will be annoying when they’re covered with mud 🙁

Packing cubes are a must if you want to keep your panniers organized (the same holds true for your luggage during more classical trips !). I used to buy them from Sea to Summit; they’re very durable but unfortunately rather expensive. I’ve since discovered the cubes from eBags and I’m very satisfied with them.

Getting my stuff wet is a big concern, especially electronics and travel documents. I usually wrap my laptop using a large trash bag, wrapped around the case. In addition to protecting it from the rain, it may help preventing theft. For smaller electronic items like my camera as well as my passport and cash, I use a waterproof case from Crenova found on Amazon. I cut off the belt to make it less bulky, and it now perfectly fits in my handlebar bag. Now I don’t fear the rain anymore !

When traveling by foot in order to explore a city, it’s convenient to use a backpack. Unfortunately, it will often take up a lot of space in your bicycles panniers when cycling. We came across a very light and convenient foldable backpack by Gonex; for less than €13, you get a bag able to hold 35 liters while weighting 300 grams ! It’s large enough to transport my laptop, one water bottle, an umbrella… Its only drawback is that the part agains your back is very flexible, and thus can be uncomfortable if the items aren’t carefully placed inside. However we’ve been using it during 2 days of trek around Kon Tum and it didn’t hurt our shoulders.